Another day and another evil dog.  After the robot and the super-science dog, what's next?  If you guessed, a bad TV movie turning The Omen into a film about a devil dog, you guessed right!  By the way, who guesses something like that?  Weirdo.  Anyways, this film comes to us from the 1970s, a strange era where TV movies run amok.  This tale involves Satanists, a female dog and that military leader from the Rambo films.  On the plus side, this Richard Crenna film is not horribly-ironic to watch now in regards to its politics (see: Rambo III).  Can this film be less shitty than Rottweiler and less disappointing than Man's Best Friend.  Get out your devil painting for my review of... 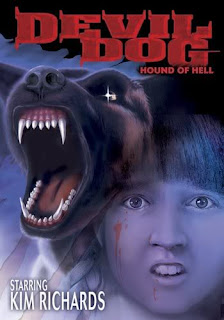 The film begins with a group of people going to a breeder to buy a dog.  They eventually settle on a nice female dog used for breeding & money proves to be no issue.  They do a silly ceremony involving the dog being placed in a pentagram as the title appears.  We are next introduced to our leads, a nice couple featuring Crenna and his 'wife.'  They go home to discover that their dog was killed by a hit-and-run driver.  The film not-so-subtly hints that it was the cult's doing.  Their reason becomes clear when a mysterious fruit vendor stops by and lets Crenna's daughter have one of the devil dog's puppies.  Note to self: don't trust fruit vendors who pull up to my house for no good reason.  The family's stereotypical Latina house maid has some reservations about the dog, but they ignore.  Apparently nobody notices the fact that the dog has flashlight eyes.  One night, the family goes off to do...something, leaving the maid with the dog.  It uses it's devil powers to burn her to death.  Rather than linger on that, we jump ahead two years and see the kids...looking exactly the same.  I know two years isn't a long time in general, but these are kids nearing puberty.  Think, movie- think!  The dog is now grown-up and just as evil as ever.

Rather than linger on that, we jump ahead two years and see the kids...looking exactly the same.  I know two years isn't a long time in general, but these are kids nearing puberty.  Think, movie- think!  The dog is now grown-up and just as evil as ever.  The dog really has it out for Crenna, which is odd considering that he was suspecting nothing.  It nearly makes him chop off his hand in a lawnmower blade, but he resists.  Naturally, he tells nobody about this.  The dog slowly begins to corrupt the whole family, turning the two kids to his side first.  The mother is resistant, especially when the kids' personalities begin to change.  It doesn't help when she finds blood in their room, huh?  In an odd move, the mother gets turned pretty easily in what should be a bigger moment.  This leaves Crenna as the lone voice of wisdom in the movie.  Hey, if he could turn Rambo sane, he can do anything!  The dog, meanwhile, has his own plans.  In a freaky scene, it runs off and kills a guy thanks to it's ability to turn into a rear projection effect.  This dog is one freaky hound, let me tell you!  When Crenna goes to break the news to the kids, they don't even get bothered by it.  Cue Crenna over-acting and yelling!

Things are not getting any brighter for Crenna, especially when he discovers a freaky painting of a demon in his kids' room.  The mother is obviously not going to help at this point, so he goes to some old lady.  As Amityville 1992, Phantasm and Troll have taught us, they are experts in the occult.  She doesn't tell him a whole lot, so he goes with Plan B: going into the desert and staring at cave paintings.  Fortunately, his taxi cab driver is the great grandson of an Indian spiritualist who lives nearby.  No, really.  The guy gives him some sort of magical doohickey and he goes off to save the day.  He is warned, however, about not looking at the beast in his true form or he'll be sent to Hell.  So, God can't help you, religious figures are no use and just looking at a dog will send you to Hell?  That's a bit pessimistic, movie!  He goes to a factory building and is confronted by the dog.  The thing morphs in a decent effect, although it's not that consistent in quality.  He uses his Iron Man-style glowing palm to touch the dog and send it away.  Before that, it shows his true, silly face.  The family goes off on a vacation to put an end to their troubles.  The son asks about the fate of the other 9 devil dogs, to which the father has no answer.  Boo! 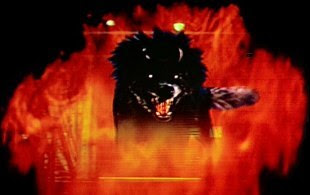 This movie is just silly.  I mean, it's a film about a demon dog.  It's not really a hound from Hell though, just a dog that is the child of a dog that was possessed.  How does that work again?  Does the possession become part of the thing's DNA or does it just jump around to one puppy at a time?  Aside from that, the movie does have some good Omen-style effects and hits all of the right cues.  Ultimately though, it's just a knock-off of a hit film from theaters.  Was this meant to be a series or something?  Did they really think that people would watch 10 different movies about demon-possessed dogs?  I think that premise would get old by about seven films.  Then again, they made six Leprechaun films...so who knows?  If you like movies about demons, puppies or films starring Richard Crenna, you'll like this one.  It throws all of its mojo into the third act, so be patient.  Demon or not, how can you not love this little guy? 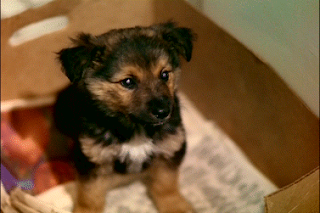 Next up, September begins with a movie set in the future time of 1970.  Can Boris Karloff manage one last bit of greatness?  Stay tuned...
Posted by Alec Pridgen at 11:52 PM