Combs Away: Beyond Re-Animator

Oh Brian Yuzna, what are you thinking?  The famous genre director has made some *interesting* film choices in this last decade.  In fact, two of them are going to show up this month- the other being Rottweiler.  On top of that, he's made the weird Faust: Love of the Damned (also with Jeffrey Combs) and Beneath Still Waters, a horror film with not exactly the best reputation.  We're not here to talk about those films though- it's Re-Animator time!  Some 14 years after the last film, Yuzna finally got around to this one.  It sure must be hard to raise funds for a movie!  That or he just felt that his time was better spent making stuff like Silent Night, Deadly Night 4, The Dentist 2 or Progeny.  Right off the bat, let's note a couple things: David Gale (aka Dr. Hill) had died and Bruce Abbot (aka the co-lead) had all but retired from acting.  What position did it leave Yuzna?  Well, Combs was (and is) still around.  That works for me!  This film does wisely acknowledge the time gap.  Mind you, while doing so, it also creates some plot points that are a bit, well, dubious.  Will Combs be enough to make this thing another new classic?  Get out your electric DNA for my review of... 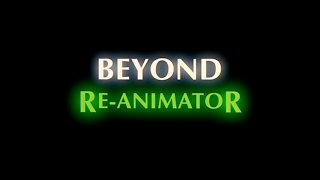 Our story begins with a pair of young boys telling scary stories in their front yard, while a teen girl gets all dressed up.  The girl scares the kids when they get inside, only for the trio to be scared by...a lost zombie.  Despite his lack of direction, he manages to kill the girl with the weakest head bash ever.  Seriously, Hulk Hogan's 'noggin knockers' look more deadly!  The police arrive too late to save the girl, but do manage to...um, re-kill the zombie.  As the brother waits outside with the police, a familiar Doctor (Jeffrey Combs- duh) gets arrested.  The kid makes eye contact with him before he's locked up and spots one of his vials of re-animation formula on the ground as the opening credits roll.  Yes, because nobody would spot the syringe full of neon green liquid!  We jump ahead thirteen years (see- I told you so) and meet the new doctor working in a high-security penitentiary.  He's the kid grown up apparently, who got his degree and applied there just to be near Dr.West.  Yes, because you want to base your life on tracking down your idol- the man who led to the death of your sister!  As a side note, what did they send West to jail for?  Is creating zombies a crime?  What's the legal precedent for that?  Anyyways, we also meet a hot, young reporter seeking a story.  She meets up with our young doctor and they knock sanitized boots.  Thanks- that was necessary. 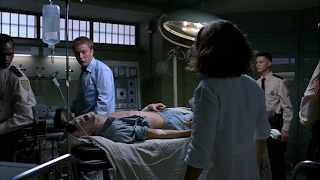 The duo work together when a freaky, Nosferatu-looking inmate dies.  They re-animate him with the old formula, since their is no shelf life on these chemicals!  West explains that he mastered the resurrection process by way of capturing 'the soul' in a little light bulb.  No, really.  All seems fine, although we learn that the lady reporter is looking into Dr. West.  After a lot of talking and plot threads being set up, the woman gets a 'behind closed doors' interview with the freaky patient.  Things turn bad, leading to the guard and sleazy Warden being bit and her being killed by way of the latter man.  Our young hero freaks out a bit and argues with West before they resurrect her with the formula and spark from a different.  The whole theme here is 'spark-switching' and it feels a bit silly.  West kills the Warden, puts his spark in the woman and then puts a rat's spark in the Warden.  Why?  It's Dr. Herbert West- he just does crazy shit for no reason!  I thought you knew that by now!  The film's million other plot threads come into play here as the rat that West experimented on turns evil due to the experimentation and the vampire-looking zombie gets loose.  Shit is about to get crazy, people! 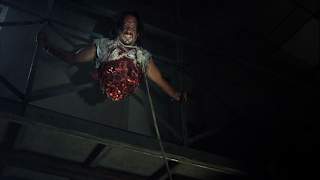 I wish I could say that things were going to get good, but I'd be lying.  The action is fast and furious...even if I can't possibly follow all of this.  West is trying to use the riot to escape, but this does not sit well with the Hispanic prisoner whose rat he experimented on or the warden, who's soul is mixed with that of a rat.  The former ends up getting cut in half during the chaos, but that doesn't stop him from swinging around...um, with a vengeance.  Yeah, it's weird.  The girlfriend is not taking the revival and soul transfer well, killing people left and right.  She eventually meets up with the rat-warden and goes to, um, relieve his lower tensions.  Her form is all wrong, however, as she bites his member off!  Our young hero finally meets up with her and tries to restore her, but things don't go to well.  West, meanwhile, faces off with the rat-warden and manages to fry him in the electric chair.  Wow, that Chekhov's Gun hung around for a while!  He manages to sneak past many of the guards while his young comrade does the merciful thing and decapitates his undead lady.  West gets out using the doctor's ID, finally free to experiment on the world...in a sequel that may or may not get made this year. 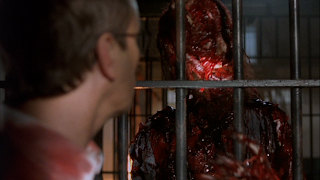 This movie...is just too much.  Don't get me wrong- it's not without merit.  The problem is just that they throw too much at the wall to see what sticks.  The finale includes at least five or six different plot threads.  You have the Latin patient stalking West, the Warden also stalking West, our hero tracking his girlfriend, the inmates going crazy and the woman battling the rat-zombie Warden!  Hell, that's not even including the side bits like the drug-using inmate main-lining West's formula.  Don't get me wrong- most of it is interesting.  The problem is just that it's overwhelming and makes the whole thing feel too long.  Too much of something can ruin it all.  Take, for example, Cradle 2 The Grave's finale.  It cross-cuts between Jet Li fighting Mark Dacascos, Gabrielle Union fighting Kelly Hu, DMX fighting a random guy and Tom Arnold driving around in a tank!  Is that enough?  To be fair, the gore here is good, although some of it is too good.  There's a line where you just look self-indulgent and this film crosses that about thirty-minutes in!  I really, really wanted to like this movie.  I was not fond of Bride when I first saw it, but liked it a lot more when I re-watched it.  Maybe this film will be so lucky.  As of right now, it's a giant, bloody mess.  I can hope that House of Re-Animator can salvage this...if they ever make it! 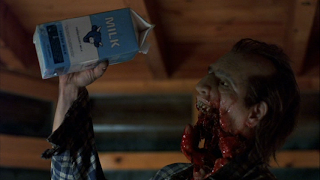 Next up, Delayed Reviews returns with a weird movie starring my favorite actor of all-time.  Can even Vincent Price make this non-Poe schlock seem good?  Stay tuned...