Our second and final Poltergeist sequel is upon us.  What do you need to know?  Well, the 'curse' claimed the life of Julian Beck and Will Sampson.  Damn you- you took a man who already had stomach cancer when he started filming and one who was having both his heart and lungs replaced!  Seriously though, their deaths were tragic, but hardly due to any curse.  It's not like talking about it can kill you....nope, still alive.  The other news was that Heather O'Rourke died during post-production, due to some doctors being dumb-asses and treating her for the wrong disorder.  Some confusion exists about this, as the director claimed that she died before the film was actually finished, while everyone else said she died during re-shoots.  Why did they do re-shoots?  Well, the movie was given a PG rating- oh the humanity!  That's right, the studio spent a shit-ton of money to make the movie more gory and full of blood.  Because of that, they refused to use the original ending that actually featured O'Rourke, leaving them with...well, you'll see.  Check out the movie for the obvious inspiration for 2003's Into The Mirror and the subsequent remake.  Get out your two-way mirrors for my review of... 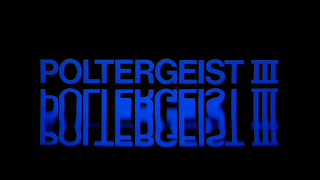 The film begins by completely contrasting the original film.  We're not in the desert or in the suburbs- we're in the big city!  This movie takes place in Chicago, a city that I actually like.  After all, Batman lives there.  We see that our heroine- O'Rourke- is living there with some relatives.  Actually, it's one relative and their awkward family.  Why is she there?  Well, the movie has no real good answer for it, so neither do I.  The family consists of her mother's sister, the woman's new husband and the man's teenage daughter.  Before you ask, they're not her kids...I think.  The movie spends so little time actually setting this up that I'm honestly not sure.  I know that the couple has only been married for about a year, so, unless the kids are aliens and/or mutants, they're not her kids.  Oh right, there's a plot here.  The young girl is going to a school for gifted kids, a school so prestigious that they get spied on by random people that help fund it.  Seriously, her class consists of a teacher telling the kids that they can do great things.  That's a nice sentiment...but don't they need actual knowledge to do this?  In a weird sub-plot, the school's psychologist is convinced that our heroine has some sort of ability to make people see things.  Sure- why not? 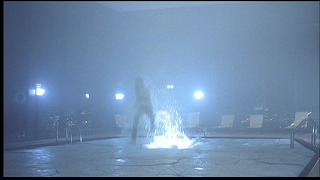 The movie ponders about for a bit before it gets down to the nitty-gritty.  After some random scenes of the ghost of Kane (aka the Preacher who's not Julian Beck), our heroine stays in for the night as the parents go off to a party...in the building.  This is one big-ass building!  So big-ass, in fact, that it is actually one building, the mall from a different building across the street and the parking garage from a third one!  The daughter sneaks off to another apartment to hang out with her friends, who all plan to sneak off to the pool after hours.  Oh, you wascally-wabbits!  They go through a lot of trouble to do this, even making a loop in the security cameras.  Seriously, why don't you just save some time and have sex?!?  At a luncheon, Tangina senses a 'disturbance in the force' and flies towards the city to help.  Make note of the timing, by the way.  Back in the apartment, the image of Kane finally makes himself known in a mirror and tries to kill our heroine.  Um, how can she help you when she's dead?  Actually, this become a key plot point later...in a complete contradiction of the previous films.  Tangina saves the day by way of psychic communication with the on-flight phone.  No, really. 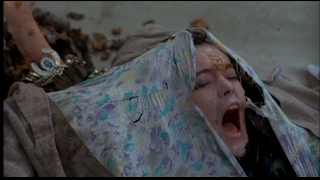 Things get crazy in the last forty minutes or so and I can only try to keep up.  Our heroine, the sister and the boyfriend fall into a watery pit in the parking lot.  The boyfriend pops out through the frozen pool- which is unfrozen seconds later- while our heroine gets out via a mirror.  The girl?  She shows up when a mirror-version of our heroine instant-kills Tangina (thanks for coming) and the girl comes out through her corpse (see above).  How did Tangina get there so fast?  The boy leaves, but we learn that the teen girl is actually a mirror duplicate (as shown by the backwards writing on her clothes).  Where does this lead?  Pretty much nowhere.  The parking lot becomes a dangerous ground when Kane coats them in ice and controls them...somehow.  It's all a big mess...that just sort of ends.  Well, that was a simple thing to solve, but...nah, it's not over.  The door is frozen over as Kane attempts to steal O'Rourke, so the father takes out the window-cleaning mechanism to go around the window.  He breaks in...and instantly disappears.  The wife has to get the spirit of O'Rourke back by telling her that she's part of her family.  They go into the mirror and bring back the father, daughter and O'Rourke.  What happens to Kane?  The dead Zelda (too soon?) leads him 'into the light' and all is well.  Well, except that you can't show O'Rourke's face in the finale... 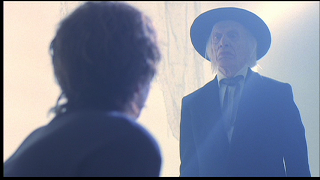 This movie...tries too hard.  Seriously, the plot is interesting at points, but just throw in too much.  On top of the family, we have the teenage friends, the multiple controlled-objects and the therapist.  You could have cut a couple of those, guys!  Of course, the problem for this is simple: sequel-itis.  They had to one-up both of the last two films, so we got weird mirror duplicates, frozen rooms, randomly appearing pits, ghost-controlled cars and an oddly-realistic Tangina corpse.  I wonder if the 'girl pops out of a dead body' scene was added to get that rating up?  The so-called 'Poltergeist Curse' comes up as the writers had to write around Will Sampson not being in it, having apparently given over his magical necklace (where was that in Part II?) to help out.  It is nice of them to credit Julian Beck as the original actor to play Kane, although the new guy does pretty well too.  The obvious thing to mention is the new ending that has no shot of O'Rourke.  I can see what they were trying to do, but they apparently had another ending with her.  Why didn't they use that?  It just sets you up for this line of questioning and could have been so easily avoided!  Is this movie as good as the first film?  No.  It just tries too hard.  Is it as good as the second film?  No.  The spirit of the movie (no pun intended) was just gone and this just feels weird.  Why change everything save for O'Rourke and Zelda?  They could have done so much more here!  As it is, it's an interesting film, but not the best send-off for the series. 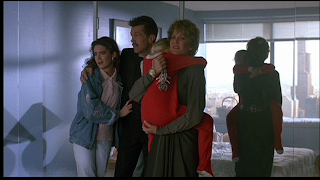 Up next, my first Klaus Kinski review sets the bar pretty high.  It has knights, aliens and the guy from Bad Lieutenant- oh my.  Stay tuned...
Posted by Alec Pridgen at 11:55 PM