Can a movie series be built around a fluke?  Species is a film that is not exactly the most highly-regarded amongst the sci-fi horror series' that include Alien, Predator and Xtro.  Okay, maybe not that last one so much.  The big appeal of the film series was obviously Natasha Henstridge and her breasts.  Call me crude, but it's the truth!  In spite of that, there are four films in this series- only two of which feature Henstridge in any real way.  Before the series went to Direct-to-Video, it had one more theatrical release in it's tank: Species 2.  Like every sequel should, this one ups the ante.  Like every sequel shouldn't but does, it creates a couple of plot inconsistencies.  They're not fully-formed into plot holes, but they're close.  Despite dying in the last film, Natasha is back for one last attempt to screw humanity into oblivion.  Like many films from this time (1997-2000), the plot involves astronauts going to mars.  Seriously, between Red Planet, Ghost of Mars and Mission To Mars, I was sick of the damn planet!  Here's another fun fact for you: the movie co-stars Peter Boyle and has the main alien guy named Boyle too!  Can Natasha's hot-self make the movie succeed yet again?  Get out your blood disease spray for my review of... 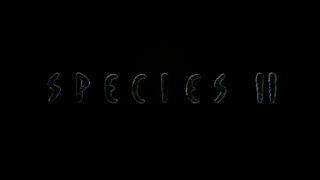 The film, like any good sci-fi film, begins in outer space.  We're sending a group of people to Mars in order to get soil samples.  Yes, that's worth the billions it would cost for the trip!  While out there, a weird fluid gets into one of the jars and manages to loose itself before the trip back begins.  Meanwhile, in an asylum, we see a man (Peter Boyle) yelling at the TV about how they shouldn't have gone to Mars.  Sure enough, the goo attacks the trio as the credits appear.  There is a time gap on the audio side, but the return goes smoothly after that.  On Earth, the astronauts are told not to have sex for 10 days as part of the decontamination process.  Is this a real rule or just a silly plot device?  Seriously, I want to know!  The lead guy named Boyle ignores that rule by making whoopee with a woman at a 'Welcome Home' party.  He continues this trend by 'hitting it' with a pair of sisters.  Unfortunately, this ends badly when the alien side of him comes loose and kills them.  That's always a mood killer!  Oddly, the guy seems barely aware of this and moves on.  In a lab, we meet up with our heroine (Marg Helgenberger) and a freaky-looking General.  Marg has made a half-human clone of Natasha Henstridge's alien character...for some reason.  Actually, it is to test her against the different kind of contaminants that might be able to kill the aliens, should they ever return.  Wow, you have good timing!
Things become more clear when the blood sample taken from Boyle turns into a CG effect and helps kill a scientist.  They figure that the three astronauts must be tainted by an alien spore, a fact helped out by a talk with Peter Boyle's former-scientist character. 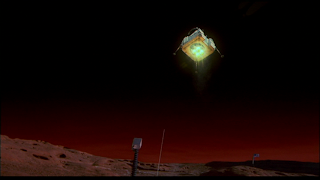 Things become more clear when the blood sample taken from Boyle turns into a CG effect and helps kill a scientist.  They figure that the three astronauts must be tainted by an alien spore, a fact helped out by a talk with Peter Boyle's former-scientist character.  Unfortunately, our alien-stud's dad is a Senator and won't play ball.  To help bring in the alien menace, the government coerces a former hunter of them to join up: Michael Madsen's Press Lenox.  He agrees to do it when they offer him $1 million- my hero.  They find the lady astronaut as she's about to make sweet, sweet love to her man.  Unfortunately for her, an alien tendril pops out and kills him!  The film's heroes arrive too late to save him, but they do stop her from breeding.  Meanwhile, the film's villain is screwing everything with two legs!  Next in line is the black astronaut, who has just returned to his house boat with a primed-and-ready woman.  Our heroes 'cock-block' him by arresting him and testing his blood at the lab.  As it turns out, he's not infected...but he is still horny.  Thanks to the non-help of the dad and the man's anonymity- despite being a famous astronaut- the villain continues to screw, kill and breed- in that order.  The black astronaut does momentarily find the half-alien, just as he blows his head off with a shotgun...only for it to grow back.  Desperate, the General has Henstridge's clone bombarded with radiation to bring out her alien side.  She manages to link up with the half-alien man and aid in his capture, but it's all a trick.  You see, the two lovers have found each other and want to knock alien boots! 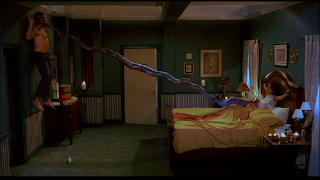 Despite all of the base's security, the half-alien man manages to get all the way to Henstridge's cell door, allowing them to psychically have foreplay- eww.  The creature escapes capture while Henstridge's Eve plans her own escape.  After a more thorough testing of the black astronaut's blood, they learn why he is immune- imperfect DNA.  He's a carrier for a disease and is thus immune, leading them to make a virus spray gun.  Eve makes her move in a slow-motion shot that takes time to show her panties- real classy.  Her plan is a bit flawed since the military men just follow her to her destination.  Speaking of which, the astronaut kills his dad and sets his dozen of kids into their cocoons to grow into adults.  The two alien-hybrids finally meet up, strip down (also in slow-motion) and 'do the intergalactic mambo.'  Instead of real sex, we see two freaky animatronic creatures humping each other, which is actually more disturbing.  The military and our heroes show up to destroy the aliens, finding the cocoons and instantly knowing what to do.  They make a point about having the black astronaut bring a machete...which he never uses.  The group battle the giant, male alien and get their asses kicked.  One random comment to Eve causes her to turn on the male...and get killed.  One impure blood slash of the machete- by Madsen- kills the alien in a matter of seconds.  We get the sequel bait ending to close it out though- big shock. This movie...is alright.  It's not terrible, but it's not that good either.  The plot does a good job of upping the ante by giving us a second alien and planting (no pun intended) the seeds of an alien invasion.  Of course, to my knowledge, the series never got to that plot point.  I guess that makes this whole thing- entirely pointless.  The acting is, well, alright.  Nobody tries all that hard, save for Boyle.  Henstridge is here mostly to show off her breasts and to stare at windows.  Think I'm being sexist?  Check out her first scene where she's strapped onto a chair designed to make her breasts pop out of the sides!  It's like the DD-version of the Fifth Element outfit.  Helgenberger and Madsen are clearly just here for the money.  Hell, the supporting actors- including the woman who's nearly raped by the astronaut- try harder than these people!  As for the effects, they're all pretty good.  However, the bit where the guy's head regenerates is the most blatant use of CG since those flying objects from Warlock 2 (which was made years earlier)!  I should also mention that Peter Medak, a man who has done films like Changeling and The Washingtonians directs.  Why?  Seriously, why?  Anyhow, as a sequel, it does all the right things without trying too hard.  Is that enough for you? 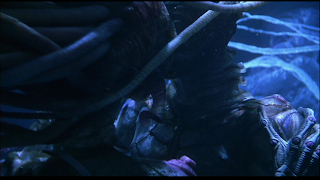 Next up, a more recent Forgotten Sequel comes to us in the form of an '80s update.  Can this Heavy movie top it's Metal original?  Stay tuned...
Posted by Alec Pridgen at 11:56 PM