Combs Away!: Bride of Re-Animator

To begin, I love Jeffrey Combs.  He's a great dude and always does a good job in his films.  Speaking of which, let's address his most famous work.  Re-Animator is a weird, wacky film.  There's no way that you can match that movie...can you?  Well, one South African genre-director thought otherwise!  As such, Brian Yuzna made both today's movie and the 2003 sequel.  How can he match or, dare I say it, top the original?  Well, the key steps are to up the budget, get the original cast back (mostly) and make a completely crazy story.  He manages to nail all of those pretty well (save for a pretty major plot hole) and make a film that's...something else.  No matter how bizarre the plot is, Jeffrey Combs is awesome!  Can he make the film rise above the crop of sub-par horror sequels though?  Get out your foot-arm for my review of... 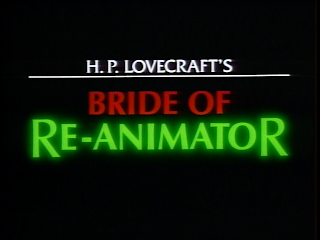 The movie begins with a freaky shot of the decapitated and laughing head of Dr. Hill.  I miss you and your freaky laughing, David Gale.  One more side note: my disappointment level rises when I see the Vestron Video logo.  You know what that means, don't you?  VHS transfer for this movie- boo!  Anyhow, we learn through some exposition text that West (Combs) and his partner fled to Central America to work as doctors in the Peace Corps.  Naturally, West is really using this area for more research, as the war-torn area is full of dead bodies.  Our heroes have to flee when things get really bad, although his partner does get one last meeting with a freedom fighter babe.  Back in the states, they work at a nearby hospital, since apparently they weren't well-known for their deeds.  Yet, oddly, there is a sub-plot about them being tracked down for just that.  Make up your mind, movie!  In another odd plot bit, the ending of Re-Animator is thrown out the window as the girl he used the formula on before the credits rolled is now just dead.  That's...pointless.  After stealing some body parts, West shows off his new killing formula (yea) and the preserved heart.  He's got a crazy plan: he wants to make a woman! 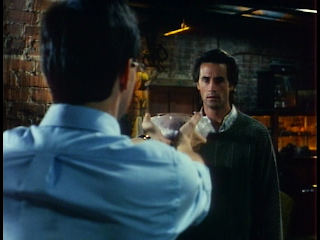 As the plan comes together, things get weirder everywhere else.  In the lab, a black lab tech learns that the disembodied head of Dr. Hill is still very much alive.  That's not a surprise to, you know, the audience after that opening bit, but whatever.  They manage to do the 'Hill won't talk around others' gag, so I guess it's alright.  On another front, there is a detective going around and looking into the whole situation.  Given that it's been 8 months, that's pretty impressive on his part.  We also get to meet the 'freedom fighter babe' as she shows up to meet the partner.  Those two meet up in a weird scene involving the guy's catatonic wife.  I don't get it, movie!  In the lab, things go badly when the detective tries to get the truth and ends up getting maimed.  Naturally, West uses his new formula on him and brings him back as a zombie.  You've got an addiction, man!  To make matters worse, the guy runs loose and kills the woman's dog.  In true Dr. West fashion, he picks up the dead animal and walks off in a nonchalant manner.  Seriously, it takes talent to be that weird and still appear to be real person!  On another front, Dr. Hill replaces his black lab tech aid with the zombified detective.  It's a small world after all! 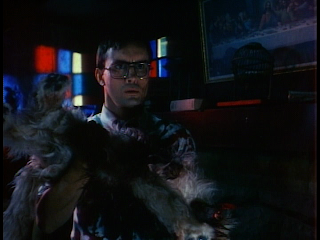 Not surprisingly, shit gets crazier as this movie goes on!  Dr. Hill forms a small army of zombies to take out Dr. West, while the good Doctor is busy attaching un-matching limbs together.  No, really.  In between that, he finds time to make a woman out of spare parts.  When 'freedom fighter babe' finds out, she's a bit...confused.  That's what you get for loving a guy associated with Jeffrey Combs!  The zombies attack the residence, aided by the weird wife of the detective and other creations.  To make things even sillier, Dr. Hill had had the wings of the dead bat from Re-Animator sewn to his head!  Words fail men, gentlemen.  We get a bunch of weird action outside while the two 'women' face-off inside.  Apparently, the heart of the woman from the first film makes her jealous and the two women fight.  Yet again, Combs plays his part well with this silly line: "My girlfriend can beat your girlfriend."  All of this goes crazier and crazier as the detective goes after the woman, only to get attacked by his not-living wife.  It's weird, random and confusing.  It all ends with West's buddy and 'freedom fighter gal' escape into a cemetery (ironic), while West is trapped with his creations.  Don't worry- he gets better.  Oh and in a sadly, ironic finale, we learn that Dr. Hill is still flying around. 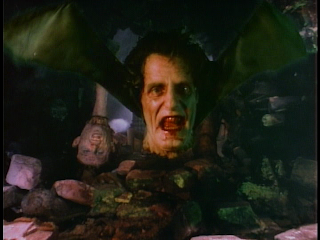 This movie is...good.  Yeah, I said it.  As big as the spectre of Re-Animator is, this movie works.  The plot is simple enough, even if the whole thing hinges upon you believing a lot of questionable things.  I will say this: if you can't buy into the whole setting, none of this works.  Your expectations also play a big part in this as well.  If you love Re-Animator to death, the whole concept of this may rub you the wrong way.  To many, it's a great one-off story and you can do nothing but detract from it.  To me, I can never complain about getting a second chance to see Combs play Dr. Herbert West!  Is the movie as good as the original?  Well, no.  Much like Yuzna's other sequel work- including Return of the Living Dead 3- the movie feels like a different creature, even while it exists in the same world.  It either works or it doesn't- it works here.  There are moments when it feels like the movie is just being crazy.  As a whole though, it's a fun trip into Crazyland.  You want to throw lots of crazy shit at me for no reason- sign me up! 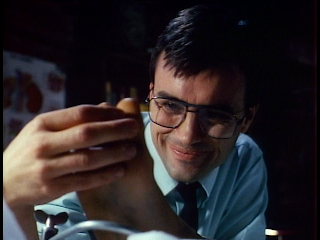 Next up, the second and final- so far- sequel comes to us from 2003.  Can the series survive over 10 years in the oven or does it just stink?  Stay tuned...