August is here and it's going to be the month of themes.  The first you'll experience is the 'Living Dead' one.  In the forty-plus years since George Romero's cult hit, numerous films have attempted to co-op the appeal of that film by taking the title alone and making their own movie.  This will become apparent over the next couple of days especially, even more as the month goes by.  Today's film is a great example of this: a low-budget zombie film that's more of a rip-off of Re-Animator than any Romero film.  It is also set in an urban environment...which does nothing for me.  I can only hope that Stuart Gordon and George A. Romero can forgive me for even dignifying this crap with a review.  Get out your non-copyrighted formula for my review of... 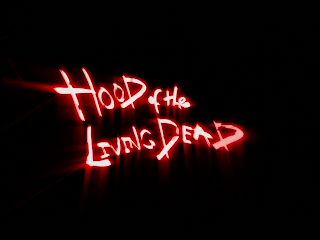 The film begins with some long credits featuring silly font usage and shots of the inner city.  Does any of this feel real?  No.  Our story is centered around a young man living in a house with his older brother.  As it turns out, the older sibling is working in a genetics lab...which kind of kills the tone, don't you think?  He makes a big deal about needing to talk to his brother about some 'big news' after school.  The brother, well, acts like a teenager and blows him off.  That day, the brother goes to work at his lab and works on a serum to restore life to dead tissue.  Gee, I can't see how this will come into play later.  The brother does come home that afternoon for the 'chat,' which is about the brother wanting to move them to a nicer neighborhood.  Being the dick he is, the younger sibling says that it's all due to the brother's relationship with a white woman...which is somewhat true.  The real reason is for safety, as gangs are rampant in the area.  This will be important in about, oh, three minutes.  The brother goes out in a huff to party with his friends, only to get shot in a drive-by.  In desperation, the brother calls his white co-worker over with the formula that they were working on in order to bring the brother to life.  Oh good, we get the end of Re-Animator in the beginning of this story.  Yea. 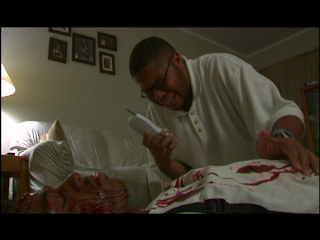 The serum appears not to work, although this false tension is lost on the audience due to the film's title!  Sure enough, he comes to life as a zombie in the ambulance and kills the two workers.  He gets loose and converts some of the rival gang members that shot him to death earlier.  I should note that bullets to the head don't kill these zombies.  They eventually explain what does and it's...kind of obvious.  Our heroes figure out that something is going on and find some zombies.  Fortunately, they brought a gun to put down the one zombie lingering about.  The others, of course, are off looking for more 'food.'  One odd bit occurs when some of the other zombies go to attack some loitering teens.  Of course, since this movie needs to be padded out, we have to hear them talk for about three minutes before this happens.  They flee, all the while firing their 'gats' at the zombie.  For some reason, their muzzle flashes are bright blue!  What kind of gun are they firing?  A soldering gun?!?  Our heroes wander around some more and eventually find another zombie to kill.  They quickly realize that they are out of the league here and do the worst thing possible: they call their boss. 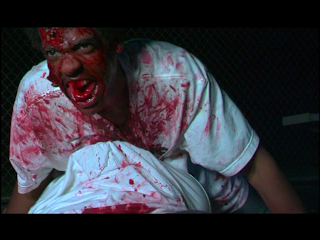 Oddly, the boss takes the 'zombie outbreak' thing pretty well, actually appearing more mad at them for waiting to call him!  He shows up with his ex-Black Ops bodyguard (a Ralph Moeller look-alike) and they split up to kill the zombies.  Within minutes of being introduced, the bodyguard walks up to a zombie attack (after another three minute filler bit) and gets bitten, apparently forgetting how to fire a gun!  The nebbish scientist actually does all the work, joined by one of the younger brothers' friends.  In an aside bit, the girlfriend shows up at the brother's house for a date, only to get killed by zombies.  Yeah, they come back to his house...for no reason the film explains.  That makes things simpler, huh?  On another street, our lead and the boss kill a bunch of zombies, although the boss gets some zombie blood in his mouth.  They go home, while the others are driving back with the slowly-dying Black Ops man.  Seriously, you suck!  Back at home, they discover the body and we get some pointless pathos.  The boss goes into the bathroom complaining about feeling ill and turns into a zombie!  He attacks our hero, who ends up being saved by the zombie brother.  Ah, blood is thicker than...um, zombie blood.  Both of them die, putting an end to the outbreak.  Oh right, the ambulance drivers kill a random passer-by (the film's co-director) and kill him.  The End? 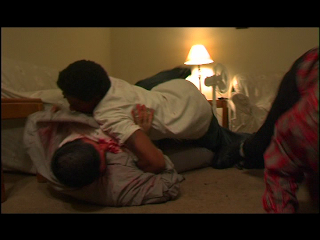 Holy rip-off Batman, this movie sucks!  The story is ridiculous, trying to rip-off Re-Animator and Romero's works at the same time.  Making your film comparable to two better franchises is never a good idea!  The acting is...well, what do you think?  It's a bunch of non-actors trying to be actors in a 'big' production.  None of it works, although the zombies at least come off as menacing.  To be fair, how hard is it to be menacing when you're covered in corn syrup and fake entrails?  The whole thing just feels cheap and does little, stupid things to distinguish itself.  How do you kill zombies?  You shoot them in the heart.  Wow, because nobody would ever try that in a normal situation!  How do you become a zombie?  You have to be killed by them...or get their blood in your mouth.  Just getting bitten, however, just kills you.  Seriously?  I can't think of a good reason for why you would do this, but whatever.  Is this film good?  No.  Is it funny?  It has it's moments.  Mostly, it's just sad, low-budget and uninspired.  Good, because there sure aren't enough of those around!  You could have some fun with this, but you have to be pretty forgiving. 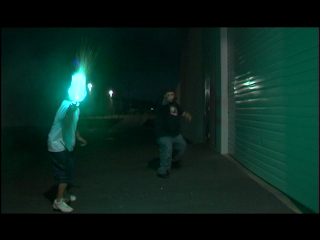 Next up, a second 'Living Dead' film comes to you from the maestro Jesus Franco.  It's less about zombies and more about, well, boobs.  Stay tuned...