There are many good reasons to be a cat person.  They're small, usually nice and sleep 98% of the day.  Not like those big dogs who can tackle you and want to go for a walk every 5 minutes.  On top of that, there are far fewer evil cats in cinema- barring, of course, Evil Cat.  Dogs, however, are vicious killers in many films.  From thought-provoking films like White Dog to utter shit like Rottweiler, these car-chasing beasts are on a rampage!  This brings me to today's film, the ironically-named Man's Best Friend.  This 1993 film is not exactly the most famous of this genre, which is surprising.  I mean, how could the combined star power of Lance Henriksen and Ally Sheedy make be a major hit?  Plus, this is the feature film debut of Max, the world's most jumping-est, climbing-est dog.  What other film includes a credit like 'Max's Behavior By:' in it?  It is a tale of science gone awry, not to mention an interfering women leading to the death of at least a dozen people.  Get out your collection of acid pee for my review of... 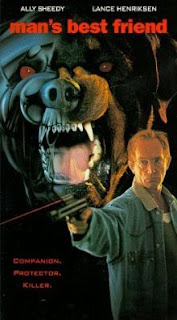 The film begins with a woman contacting a news reporter (Sheedy) about some questionable operations in her company E-Max.  She sets up a meeting at 8:30 that night and returns to work.  Unfortunately for her, a P.O.V. monster breaks out of its cage and kills her, only to be stopped too late by an unseen man and his dart gun.  Meanwhile, the lady reporter is excited about the chance to break out of the 'fluff journalism' with this story.  Her excitement fades when 9pm comes and the woman doesn't show up.  Naturally, she decides to break into the facility, which proves easier than you might think.  Note to multi-million dollar companies: hire more than one guard!  They learn that vivisection is going on with many animals, including rabbits, monkeys and cats.  In the upper part of the lab, they discover tigers, panthers and...a dog.  Yes, this is Max- our villain/adorable animal for the film.  The guard shows up, but Max takes him out by knocking some barrels into the guy.  By the way, the guard is played by a character actor who will make you go 'I know that guy, but from where' for like three days.  A scientist (Henriksen) shows up, but gets knocked out of the way by the women and the dog.  The trio escape, leading the man to go to the police.  Fun fact: the fat, jaded cop is played by Robert Costanzo, who is also the voice of Detective Harvey Bullock on Batman: The Animated Series.  Good to see that you've been type-cast, buddy!  Lance explains that the dog is a million-dollar experiment and belongs to him, which makes the cops apathetic. 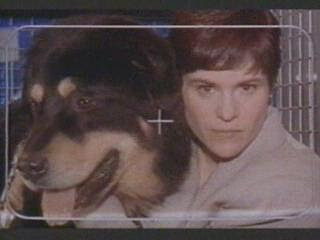 Ally's boyfriend is upset by her bringing the dog home, but eventually learns to deal with it.  Well, except for the part where Max keeps him from getting laid.  In the neighborhood, Max is allowed to run around and we learn that this is a bad thing.  You see, Lance did genetic engineering on him, putting the DNA of animals such as the owl, the chameleon, the panther and the tiger.  Naturally, all of this tampering has made the animal unbalanced and the drugs keeping him sane are wearing off.  This proves true when he is allowed to chase a cat & he manages to climb up a tree (panther DNA) and swallow the cat whole!  Okay, I guess he has snake DNA too!  The kids that see this, of course, tell nobody.  How many lives would you save if you weren't idiots?  As a bonus, the dog breaks into the house of a neighbor and rapes it's female dog!  Besides being freaky, they play 'Puppy Love' over it.  Were you trying to make a rape scene (animal or not) funny?  I really don't get it!  Lance, meanwhile, is getting more incensed with the cops for not helping him enough.  To make matters worse for him, they begin to look into the death of the woman from the first scene.  While that's going on, Max kills a mailman.  Ha ha- it's funny because he died!

Here's the cat video...just for Carl.
As the third act comes along, things don't get any more nice.  Ally's boyfriend is really upset with the dog, after it caused him to nearly have a car accident and because it ate his bird!  To get back at it, he poisons some meat and tries to feed it to the dog- but he's too smart for that.  Lance finally finds the news station and pressures the camerawoman for information about our heroine.  The police finally wise up too and bring in the cavalry.  Unfortunately, this dog can out-run cop cars and leap over a blockade thanks to a badly-input digital effect.  Some dog catchers try to get the dog, but it locks the garage door on them & uses his chameleon powers to kill them Predator-style.  No, really.  Oh yeah, the boyfriend gets killed after the dog sprays his face with acid pee.  Apparently he's part Xenomorph too!  Lance grabs our heroine and her new puppy while the cops are away (why exactly?) and drives to the E-Max facility.  The dog gives them pursuit, however, and causes them to have a cliche, spinning car crash.  All of them walk out barely harmed and Max chases our heroine into the building.  After a long, tense scene it...licks her face.  Unfortunately, Lance shows up with a shotgun, having apparently abandoned any attempt to recapture the beast.  It tackles him, but he also gets a shot off and kills it.  The puppy validates it's existence in the film by accidentally electrocuting Lance.  In the Epilogue (I'm learning), the female dog has puppies, one of which is a dead-ringer for Max.  Nobody notices that, huh? 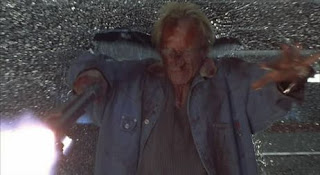 This movie could have been great, but falls flat more often than not.  The plot is a good one, having science gone awry and a killer animal.  However, logic is stretched to an extreme degree to make any of this work.  Can you really take just enough DNA from an animal to give another one a single trait that it has?  Furthermore, can this actually be done without killing the animal?  I mean, i'm no scientist, but I find this pretty implausible.  Older movies such as Ghost of Frankenstein actually addresses ideas like this with more logic! Aside from that, the movie does have some good kills and action in it.  I liked the attention to detail put into some of these, even if I didn't exactly find it all that logical.  The use of a real dog is a nice touch, although it also makes some things awkward.  As bad as Max could be, does anyone really want to see it get shot to death?  If you like these killer animal films, you can do far worse.  If you've seen Day of the Animals or, quite frankly, any William Girdler films, you'll know what I mean.  It could have been a lot better, but it works.  How do you feel about it, Lance Henriksen? 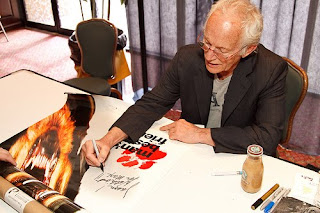 Next up, we get one more bad doggie for August.  This one is so bad that even dares to rip-off The Omen!  Stay tuned...