Klaus Kinski is a man whose talents have worked for many countries.  Just this month, we've seen him in a Spanish film, an Italian film and now it's a British one.  As a bonus, this movie was originally meant to be directed by Tobe Hooper.  According to reports, the film's two stars- Oliver Reed and Kinski- did not like Hooper and did everything they could to get rid of him.  This plan worked and the T.C.M. director was gone after a mere ten days.  In his place was Piers Haggard, the man who brought us The Fiendish Plot of Fu Manchu.  That's right- he directed Peter Sellers' last movie, which was both racist and not funny.  I can see why they were so high on the guy!  The film is based on a book, apparently, and takes place in London.  This does beg the question of why Hooper was initially hired in the first place, but, whatever.  So the film is about two convergent events: a poisonous snake arriving at a kid's house and a hostage situation occurring.  Worst day ever!!!  Given the relatively-dubious quality of the Kinski films so far, can this one do any better or will it just kill my nervous system?  Get out your anti-snake helmet for my review of... 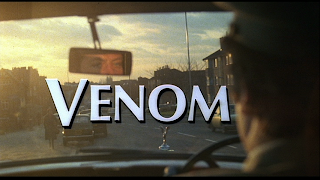 The movie begins with a rich kid being picked up from school by his butler (Reed) and his mother.  This scene runs for a few moments, mostly in an attempt to get the credits in.  This is a very good argument for putting the credits at the end of the movie, guys!  Anyways, the mother is worried because...well, she's a doting mother stereotype.  The kid is at home with the grandfather, who is a fun character.  Naturally, this means that she believes him to be reckless and crazy.  She has to go away on a trip that's for both business and pleasure.  She worries and dotes for a few minutes before finally leaving the movie.  You won't be missed.  During all of that, the butler and the maid do some sort of scheming.  Gee, they look trustworthy!  The woman calls up someone who turns out to be...drum roll please...Klaus Kinski.  The grandpa and son get along great, talking about the old man's past in Africa.  Gee, I wonder if knowledge about animals from Africa will come in handy.  The kid goes out to a pet store and picks up his delivery of a snake.  Unfortunately, the store finds out too late that the Black Mamba meant for a poison-testing lab was sent there instead.  Ruh roh.  Meanwhile, Kinski sets up a meeting with the grandfather...only to bail on him.  Yeah, I don't get that at all. 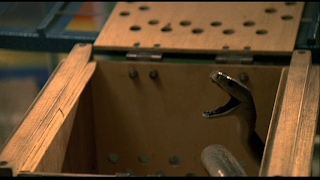 Klaus arrives at the house and the group enacts their master plan.  Unfortunately for them, they draw some police attention.  Well, at least it's only a couple cops.  Oops, Oliver just blasted one with a shotgun.  Now you guys may have some trouble.  To make matters worse, they open the box and the snake bites the maid.  Never mind that the snake clearly has no fangs (see above shot).  It's a bit like the zombie vs. shark battle where the shark has had all of it's teeth pulled.  The wily snake escapes into the vents as the people freak out.  Reed gets mad (big surprise), but Kinski- surprisingly- stays calm and collected.  The whole situation turns into a hostage crisis.  The police surround the area.  While this is happening, the maid is slowly dying from the snake venom.  By the way, if you love ridiculous acting, her performance here is golden!  The woman from the poison-studying group calls up the cops and warns them about the situation, but all is still not clear to them yet.  Speaking of the snake, he's crawling through the air ducts in a scene we would later enjoy in Die Hard. 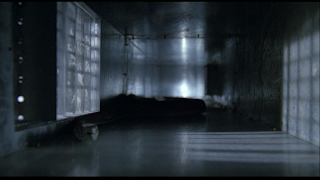 Things get more tense and dramatic as the story continues.  The snake gets loose for a bit and does some P.O.V. style-attacks.  Eventually, it ends up in the basement where it attacks Reed.  Outside, the poison expert negotiates for the girl to be sent out and given the cure...only for it to be a trick and have Kinski bring her inside.  They threaten her with violence and send out a finger of her's to prove how serious they are.  Mind you, this turns out to be one of the dead maid's, but it's still interesting.  Holy Michael Gough sighting!  Gough appears to help the police by showing them a side entrance to the house, while the main cop gears up as a motorcycle cop.  Why?  To protect him from the snake bites, of course.  They go inside and get attacked by the snake.  However, they do manage to kill Reed with a shotgun blast.  Things get really tense as Kinski puts the poison expert out on the balcony for cover while he negotiates.  That all falls apart when the snake attacks him, biting his face!  He gets shot when the woman moves, leading to his bloody corpse falling off the balcony.  They head-shot the snake during all of this too, by the way.  The day is saved...but the mother shows up again.  Oh well- you win some, you lose some. 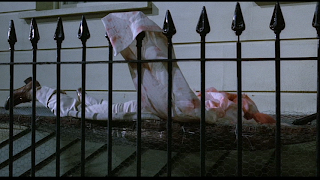 This movie...has a lot of potential, but doesn't quite live up to them.  The plot is a simple one, but it works.  The problem is that they can only do so much, leading to many long pauses and breaks.  The constant cross-cutting between the snake, the police, the criminals and the hostages wears a little thin too.  It's not terrible- just a bit distracting.  There are also a lot of times when the movie feels a bit overly-dramatic too.  For example, three armed men can do nothing when facing down a single snake?  I get what you're going for movie, but it just feels odd.  On the upside, Reed and Kinski both play their parts to perfection.  Mind you, depending on how much of their personal history you believe, these roles are pretty much their actual personalities!  Plus, I'll never complain about a surprise Michael Gough cameo.  If you like these kind of thrillers, this will please you.  If you like scarier stuff, look elsewhere. 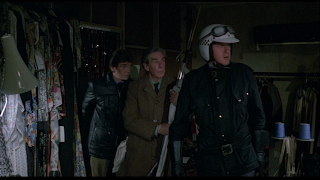 Next up, Forgotten Sequels returns with a story 20+ years in the making.  Will it be worth the wait or just leave you wanting an axe to the face?  Stay tuned...
Posted by Alec Pridgen at 12:33 PM