For those who have followed the page for a while, you would know that I have love/hate relationship with the Amityville Horror series.  I managed to watch the 3rd, 6th and 8th films in the series last year, but boy was it hard.  Incidentally, if you are wondering why I picked those ones: because, that's why!  Anyhow, I skipped the 4th film because it was out-of-print via Netflix.  Checking out my local MovieStop, I found this movie on the shelf and quickly picked it up.  Considering that the last DVD print was made in 2003, I had to get the one copy that they had.  The movie claims to be a separate beast from the first three films, but actually ends up setting the plot ideas used for Parts 5-8.  Never mind the fact that Part 3 ends with the house being blown up!  The movie also credits the book of the same name with the screenplay, but that's mostly a lie.  The books are based on the real legend of what happened at the house- the family murder- and is about the Lutz family being pursued by evil forces.  This movie..not so much.  This is... 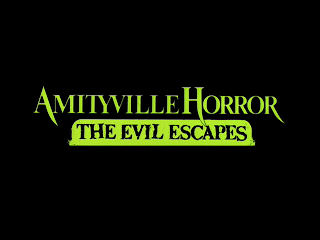 The film begins with a 'clown car' full of priests arriving at the infamous house.  Why do you need this many priests?  Is Electronic Arts trying to release another game that's sacrilegious?  No, they are actually here to exorcise the entire house!  This does not go well, ending when a young priest is taken out by a killer lamp that projects the face of Kibakichi (it's a dead-ringer) and knocks him across the room.  While he is in the hospital, the estate's owner sells all of the ornaments and furniture, including the lamp.  Um, did you guys skip a step here?  You can't go 'we must exorcise the house' and 'let's sell everything' in the span of two days.  It takes longer than that to get rid of termites!  A woman buys the big, ugly lamp for her sister (Patty Duke) in California, but not before she cuts her finger on the thing.  Our narrative jumps to said sister, whose house is invaded by the evil spirit via the 'Evil Dead' Cam and a light wind.  By the way, if you needed proof that this movie was made post-Evil Dead, this is it!  The house is invaded by something else though: family.  Our trouble-ridden family includes a now-single mother, an awkward teen, an ugly boy (sorry, but you are!) and a little girl pulled right out of Poltergeist.  After the death of her husband, the woman takes her family to live there for a bit of financial security.  Start some trouble, Satan! 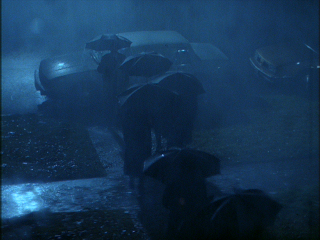 The evil spirit has entered the house via the lamp.  It takes on a variety of powers right out of Poltergeist and 1988's Pulse.  Here's a sample:
* The lamp opens the door to the bird's cage and chases it into a toaster oven.  Still want Quizno's?
* It blocks all incoming calls from getting through to the house.
* The force blows incoming mail behind couches.
* It causes a food processor to turn on, cutting up a young man's hand.
* The power turns on a chainsaw and nearly causes the boy to kill grandma.  Another Evil Dead reference?
* The lamp causes black sludge to come out through the pipes.  Not only that, but it causes a board to break, which blocks in the plumber, and drowns the man in said sludge.
* To cover that offense, it controls the truck outside of the house and makes it drive away. 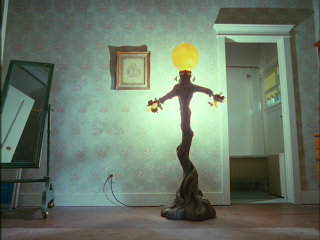 After all of this chaos, the woman dies from the cut on her finger (don't ask), which prompts the now-healthy young priest to try and call her.  This angers the spirit, which calls him back and melts his phone!  How does this work across phone lines and over 2,700 miles?!?  He goes there in person, which is something that angers the demon all the more.  The family finally figures out that something is up when the youngest daughter talks to her dead father and the maid ends up dead.  They finally confront the evil lamp in the attic and bring the priest for back-up.  Unfortunately, the evil appliance has possessed the girl and causes her to fly across the room like Cathy Rigby and stab the priest.  Obvious wires for the win!  They hold the girl down- why is that hard?- while the grandmother tries to stop the lamp.  One flash of light puts her down though.  What is this, Everquest?  Finally, they manage to stop the lamp by tossing out the window, causing it to crash into a bed of rocks.  By the way, how close is your house to the shore again?  It explodes like a Ford Pinto, making everything alright.  Unfortunately, we get a twist ending that would show up again in Fallen- possessed cat. 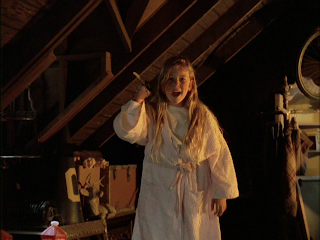 This movie is good to a point, but fails as time goes by.  Much like Amityville 1992: It's About Time, it goes way over-the-top when it comes to the spirit's powers.  They set up that it controls the house by plugging into the breaker.  I can buy that- as a movie idea, not reality- but they can't be content with that.  Consider that Pulse did this same premise a year earlier (1988) and managed to not pull this crap.  It wasn't good, but it played by the rules.  If you want to set-up that the house can control anything in itself, I can sort of buy that.  They don't do that though.  Like Amityville 3-D and 1992, the force can attack in any way that it feels like it should.  On a side note, they don't overdo the bit with the flies, which is a great improvement over 3-D.  Does the movie ever explain how the power controls a chainsaw (it's not plugged into anything) or creates sludge in the pipes?  No.  If you can't be bothered to explain your own plot events, why should I care?  As far as Amityville films go, this is decent.  As far as the standard for any other film series, it sucks. 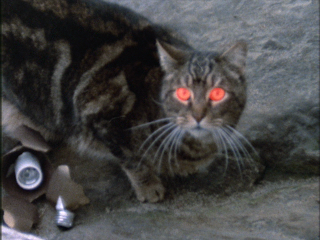 Next up, Blockbuster Trash brings you the sequel to an Uwe Boll anti-classic.  Can it suck as hard as the first movie?  It will find a way.  Stay tuned...
Posted by Alec Pridgen at 10:49 PM