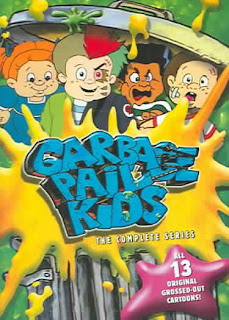 As I said in the teaser, this show is obscure because it never aired in North America!  It aired in many other places and has since been released on DVD though.  Why?  I'll attempt to explain...

The show was ordered by CBS in 1987, but protested against.  I guess all the moms who protested Silent Night, Deadly Night had free time.  The controversy was so great that the show was pulled before it even aired and replaced with another episode of Muppet Babies, expanding that show's time-slot to 90 minutes!

So, after all of these years, is the show good?  No.  It's terrible.  Just watch the introduction and see why.

There is no real over-arcing plot to the show.  It features random cartoon segments that are unrelated, including ironic tributes to people such as 'The Grouchy Neighbor.'  The only connective thread is a group of GPK that have super-powers and battle evil adults.  One of them can turn into water, while another one is half-Frankenstein's monster.  Why?  Who the hell knows or cares?

Avoid this show unless you are extremely and utterly curious.  You will likely be disappointed, unless you think that Ren & Stimpy is too cerebral.  Just trust me here, people.

Up next, a movie serial icon comes to the small screen in animated form.  All I can say is this: Flash...oh OH!  Stay tuned...
Posted by Alec Pridgen at 3:06 PM