Well, since I'm late about this, we get A DOUBLE FEATURE!  I hope that you're happy, because I sure am.


The Critters movies are not forefront in people's minds, although they were quite successful in their own time.  Looking back, not so many people care.  In spite of that, I am going to close out this series.  It's been nearly a year in the making, but let's find out just how we got to being in outer space via Critters 4.  I will say that the films do maintain a minor bit of continuity, although they barely cling to it like a car sliding down a building wall.  The movies are all built around the eponymous monsters wreaking havoc, although their powers and looks vary from film to film.  They always smash things up and eat people though.  Let's not stall any longer and burrow into...
Critters
The film begins in space, which actually sort of fitting.  Not that I think that they planned it at that way, mind you.  A mysterious group of aliens escape from a prison asteroid and head towards planet Earth.  You guys ever feel like hitting up Jupiter instead?  We literally just cleaned up after Nukie!  A pair of alien bounty hunters with wads of gum for heads are sent to retrieve them as the film cuts to Grover's Bend.  A farm family is living just fine out there, although the younger son and daughter fight and the couple's slightly-unintelligent helper is a bit weird.  We learn that the daughter is bringing company to dinner that night in the form of...Billy Zane with hair?  Well, you have to start somewhere!  The dad also has a big bowling tournament that night, in addition to all of the hijinks in town and the sheriff (M. Emmet Walsh) trying to keep order.  You don't care about that, though- you want to see the creatures.  Unfortunately, you don't 'see' a lot of them, although they are around.  After killing the deputy (see- I told you I was innocent of that!), they make it to the farm and kill Zane during a make-out session in the barn.  That will teach you!  The family is trapped after the things wreck the truck and cut the power.  They also have quills that they can shoot out, although the producers forget that randomly throughout the series. 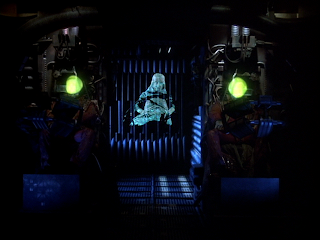 The good news is that the bounty hunters are here to save the day- and they're packing heat!  The reason for their gumball heads is because they can morph their faces, leading to some odd comedy that is a bit overdone here.  It works better in the sequel, at least.  They smash up a lot of the town before even getting to the farm!  The critters themselves prove to be quite formidable, constantly attacking our heroes and taking out the parents with their quills.  The monsters can also merge into larger, deadlier critters.  The problem: you never really see it.  For all its faults, The Deadly Spawn managed to give you a human-sized creature on screen several times.  Fun fact: this movie came three years after that one!  The cavalry finally arrives and begins to...blow up the house.  Is that your idea of helping?  They do manage to kill most of the critters, although they get in their spaceship for back-up.  If you are wondering how they operate the controls, don't.  In the battle, the whole damn house gets blown up!  The next morning, the good aliens hit a button on a remote that causes the house to rebuild itself.  The dumb helper goes along with the aliens, figuring that he can find direction in his life too.  This happy ending is ruined by some sequel bait involving a group of eggs in the barn though.  Hurray.

The second film begins with a bit of retconning.  You see, in the ensuing years after the incident, the family moved out of the farm and to another town.  This was due to the son's claims of 'critters,' which brought a lot of bad notoriety to the town.  Around this time, the son is coming to visit his grandmother...who was not mentioned in the first movie at all.  Retcons for all!  An opportunistic loser takes the eggs from the barn and paints them in time for Easter.  In a bit of lazy movie science, the eggs hatch quickly due to being put near a hot pipe, since the cold of the air kept them unborn.  Yeah, I buy that!  Our young hero does not endear himself very well in town, even getting beaten up by a bully.  Things look up when he meets a girl from his school- not in Critters- and gets a whole romantic subplot set up.  When a couple of dead bodies show up, they go to see the sheriff...who is now played by Barry Corbin.  Did you think that we would not notice that, guys?  Anyhow, he retired...or something and won't help.  Fortunately, the wacky farm-hand and the aliens are here to, you guessed it, blow things up.  We get the face transformation gag again, but the farm-hand pulls out a Playboy in time to stop the alien from taking his face again.  That's...odd, movie. 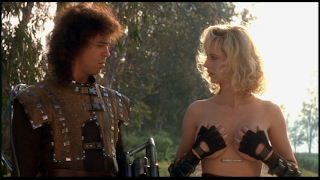 Unfortunately for our heroes, the townsfolk are really hesitant to believe in the creatures.  Even when the new Sheriff's body crashes through the church window, they doubt the authenticity.  They show up to blow the crap out of the diner run by Eddie Deezen (WHY?!?), giving us lots of explosions and gooey stuff.  The monsters flee, but are hiding out in the city.  One of the two bounty hunters is killed off-screen, causing the male-ish one to freak out and lose his face.  All of the survivors are holed up in the church, but, thankfully, help arrives in the form of the old Sheriff, who just sort of decides to fight again.  Our heroes come up with a plan: lure the critters to a building (one filled with meat) and blow it up.  This works, thanks to the random intervention of the face-shifting alien.  Apparently he can turn into a critter too.  That...will never come up again, don't worry.  Unfortunately, enough critters survive to make a giant critter ball and rampage through town!  Our good heroes try to stop the ball with their truck, but don't make a dent in it.  Quick shout-out to the one guy who gets run over/eaten, by the way.  The farm-hand gets in the bounty hunters' ship and crashes it into the ball, killing both!  In the morning, however, he inexplicably shows up alive and decides to stay as the new Sheriff, while the alien takes his face.  Make note of these facts for later.  The End. There is a major contrast between these two movies and it is hard to deal with.  The first film treats this whole thing as a serious effort to make real horror.  The second film embraces all the craziness and is a much more fun movie, even if it is not any smarter.  I laugh a bit at the Chiodo Brothers wanting a credit for creating the Critters Effects when you see so little of them.  As far as the second film goes, that is not the case.  Honestly, the first one is worth a rental, but if you are going to actually want to re-watch any of the films in the series I've covered thus far, it is Critters 2.  It is the film that the first one should have been, re-casting or not.  Why does this always seem to happen?  It is the exact same thing with Ghoulies and Ghoulies II.  If you can't make the fun, effects-filled movie you want, don't make one!  I can appreciate you getting a bigger budget, but just skimp on the bad stuff altogether! 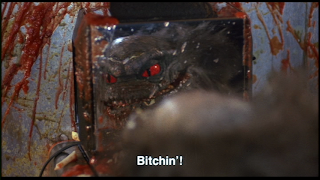 Up next, I tackle the final piece in the Critters puzzle.  Do I get my big finish?  I sure hope so.  Stay tuned...
Posted by Alec Pridgen at 2:36 AM