This title really speaks for itself, doesn't it?  I mean, it's called Slugs.  Not only that, but they insisted on putting 'The Movie' in the title as well.  Why?  In case you accidentally thought you were watching the audio tape of Slugs: The Book.  Seriously, there's a book called that!  All of you Diary of A Young Girl fans can suck it!  Like the book, this movie is about killer slugs.  That's basically it.  Oh and the lead character is named Mike Brady.  This film was made in 1988, so this is not some sort of coincidence like Black Sunday featuring a guy named Homer Simpson.  It's also not made out to be a joke, so I'm not sure what to think.  Anyhow, enjoy my sticky review of... 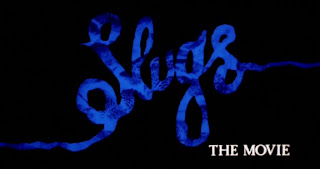 This film has almost no real plot to speak of.  I mean, we get a bunch of random characters that are introduced, but most of them are just there to die.  Let me show you...
* An elderly couple gets killed one of the slugs hides in the man's work gloves and latches onto his finger.  Rather than take off the glove, he cuts his own hand off.  Unfortunately, he still manages to blow up the house and kill his wife.  Damn!
* A friend of the wife accidentally cooks a slug in her salad after it crawls into her lettuce.  Eating this, causes her husband to get parasites and his eyes explode in a restaurant!
* A horny couple is killed when a swarm of slugs cover their floor while they are having sex.  This would take hours, which means that they put Sting to shame!
* The city's sanitation commissioner ignores Brady's warnings about the threat and is killed (off-screen) by some slugs that come up through his toilet. 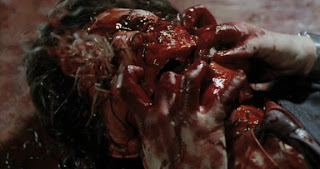 That's the basic set-up.  Slugs wander around in ancillary scenes, Brady tries to figure out what is going on and someone is killed.  It is a pretty simple formula, with a couple of odd quirks to it.  For example, a young girl is chased by a potential date-rapist and falls into a sewer.  The slugs kill her, but the attacker is spared.  What kind of '80s horror film moral is that, guys?!?  There's also a scene where the sewer worker who helps Brady stop the slugs- if I tell you why, you'll think I'm joking- tells his wife to wait up for him.  Why?  Because when he gets back, he wants to 'get naked and do something freaky.'  Eww.  I just hope that this movie never follows up on this scene.  Oh good, they kill him off in the big finale.  Thanks, movie. 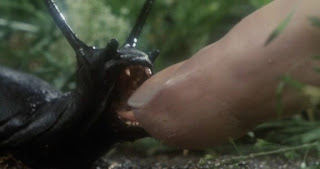 This movie is stupid, but fun.  I mean, it's about killer slugs.  There is one scene where they explain that the things grew bigger and carnivorous due to toxic waste being dumped in the water reservoir.  That doesn't work.  Putting toxic waste into the water either makes Teenage Mutant Ninja Turtles or that Alien-style monster from The Being!  Never mind the fact that ones they actually show are not really any bigger than a normal slug.  To the movie's credit, I've never seen a real slug attack and kill a hamster though.  The whole thing is just ridiculous, from the one-off characters to the overly-gore and long killing scenes.  They are pure '80s trash at it's stupidest and finest.  The whole thing is worth a rental for fans of crap like this.  Anyone who rents a movie called Slugs: The Movie knows what they are getting. 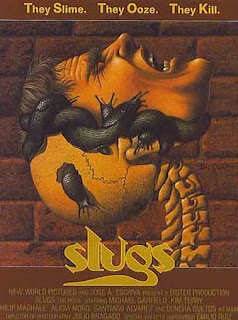 Up next, I kick off George A. Romero Week with his most recent non-zombie film.  Be honest- you've never heard of it.  Stay tuned...
Posted by Alec Pridgen at 11:53 PM