As a director and producer, Roger Corman is a bit underrated in many ways.  Sure, a lot of his movies are not great and merely adequate.  Given the environment he worked in, can we really blame him for making cheap, simple productions?  Sure, The Terror is a really bad, Public Domain film, but you do have to admire his creativity.  You have a set and three more days of shooting with your star- make a movie!  In the late '80s and '90s, there was a curious trend to remake all of his movies.  The weirdest part, however, is that people have tried to pretend that this did not happen.  Almost none of these movies- including 1989's The Masque of Red Death and 1995's The Wasp Woman- have DVD releases of any kinds.  The closest they have is on VHS, which is where I got this movie.  Made for Showtime as part of the Roger Corman Presents series, this movie stars Anthony Michael Hall and a whole slew of future comedy stars.  To further prove my 'shame' theory, this movie was released on VHS as The Death Artist.  Get your clay out as I give you my review of... 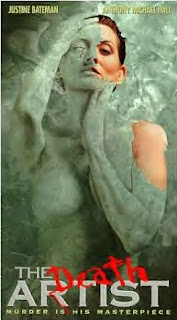 This is a nearly shot-for-shot remake of the original film, so I will spare you a regular plot synopsis.  Instead, I'll highlight some key aspects of the film and the like.

* To his credit, Hall gets the lowly guy routine down pretty well.  He overdoes it a bit in the end though.
* David Cross has a small role as a man fawning after the lead poet in the club.  It's nice to see him only starting to go bald here.
* The owner is played by Sam Lloyd, who most people will know as Ted, the lawyer from Scrubs.  Here he plays a stern, tough-talking boss.  See- he does have range!
* Mad TV's Michael McDonald has a cameo as a performance artist who spastically dances on stage.  This was his big break before being steamrolled by Austin Powers in the first film.
* There is more gore in regards to the cat scene this time around, but it's not excessive.
* Random cameo by Paul Bartel, although he is not playing Mr. Bland here.  Too bad.
* Will Ferrel- seriously - has a cameo role as a stoner who loves Walter's art.  This is just before his big break out on SNL.
* They change the order of some kills, having the headless man murder take place before that of the lady model's.  Why?  Who knows?
* The ending is mostly intact, although the trailer- which plays before the movie- spoils it.  Just to warn you if you don't actually know it.  They cut the part with the ghosts though, choosing instead to just rip-off the ending of Lon Chaney Sr.'s The Phantom of the Opera.
* They do add a 'what happened later' tag on the ending, which is pretty decent.

This movie is decent, but has the same problems that I had with the 1990 version of Night of the Living Dead.  On one hand, they don't change a lot, which is a good thing.  On the other hand, it sometimes feels like they just wanted to do the film again, but in color.  You guys could just save time and, you know, colorize it!  The acting is solid, although the script does not age too well at times.  Many of the ancillary characters are very one-dimensional (especially the two jealous artists).  If you like the original film, this will do nothing to really replace it.  If you don't, this will not change your mind about the story either.  It's decent, but nothing special.

*
Up next, a recent remake of another Corman film.  This one is Public Domain too, so people have free-range to mess with it.  You've been warned!  Stay tuned...
Posted by Alec Pridgen at 11:50 PM