Lock Me Up: The Asylum's Sherlock Holmes

Do I even need to tell you that this is a bad movie?  Honestly, you already know.  What you may not know, however, is just how bad it is and just how obscenely-stupid it is.  If you have ever read a single Holmes story, you will be shocked and horrified at every turn.  Hell, if you are like me and know the character just based on films and stories told about the books, you will know just how bizarre this thing is.  On a certain level, it is impressive that something so absurd was created.  You just want to revel in the whole experience.  Then again, this is The Asylum, so they make even that hard!  For example, my disc came on Day 1 from Netflix (it came on 1/26 exactly) and skipped for a ten minute segment.  *Sigh*  This happened with my copy of Mega Shark vs. Giant Octopus a while back, proving that they make discs with the same care as they do films!  Let's get down to the elementary facts in my review of... 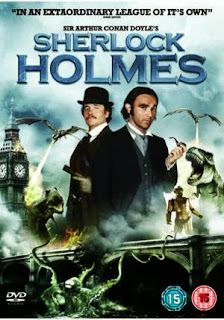 The film begins by introducing to its odd framing device.  Basically, it's 1944 and Dr. Watson is on his deathbed.  He shares one last journal (read: book) with...some lady.  If they don't bother to explain this, I won't either!  Our first bit in the present, which is the past....more so than the other past of 1944...is of a group of sailors on a boat.  No, I'm not going to do a Lonely Island joke- ever!  Why do we see them?  Two words: giant squid attack.  Before you can stop to think about that, we jump back to London, only to learn that everyone is cast wrong.  Holmes is a small man who is about a foot shorter than Watson, who does not really have the build for it.  To make matters worse, Holmes never wears his trademark hat or jacket.  Hell, he doesn't even wear the right color!  Way to base your whole movie on the trailer to a Guy Ritchie film, guys.  Our first bit with Holmes has him showing off by pulling Watson away from an autopsy- which was totally common in 1888- by explaining everything.  Of course, given this movie's quality, the whole thing is a cheat.  He explains the man's profession and death by examining body parts he could not see and, on top of that, he was on the other side of the room.  Way to use your bionic eyes, Holmes!  We are also treated a long, drawn-out scene of Watson climbing down a cliff to check out the boat wreckage.  It goes nowhere, so, for everyone, I say 'thank you for the padding.'  Things look up as a man propositions a woman in- you guessed it- White Chapel, only to be cock-blocked by...a dinosaur.  Of course, this looks like shit for two reasons.  One- the CG is done by The Asylum and two- this is a T-Rex, but done on the scale of a Raptor.  What the hell, guys?  Could you just not make up your minds? 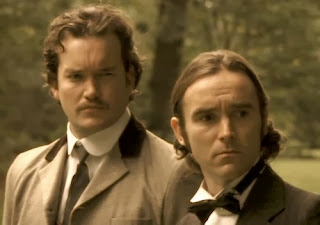 Monster hysteria grips London, despite there only being one witness to the dinosaur attack and no survivors of the squid attack, how is it news?  A random scene involves a man consulting Dr. Watson for more drugs to deal with his pain.  They tease a romantic subplot with Watson and the woman, but that goes nowhere.  Holmes and Watson go for a walk to discuss the recent events, only to come across a giant dinosaur footprint.  After this, they are startled by...the sound of a dinosaur and flee. That's right- they don't show it.  Hand-held footage of two idiots dressed like literary characters and running from nothing- check.  This ends in our heroes simply getting away without a real resolution, but discovering that a water pump has gone missing from a building.  Inspector Lestrade shows up and basically parrots what we already know.  Don't worry- his appearance in the film does have some pay-off eventually.  By some stretch of logic, Holmes and Watson investigate a man who appears to be a blacksmith.  We also get the requisite 'Holmes wears a disguise and fools Watson' bit.  Wow, you can read the stories too!  Unfortunately for the smith, the dinosaur shows up and kills him.  Never mind that Lestrade is about three rooms away, the floors are metal and the building is not that big.  Who was expecting logic at this point?  DVD glitch, take me away! 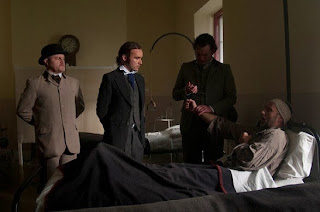 A ten minute segment was un-watchable on my disc leads me to suddenly see Holmes and Watson captured by a mysterious man in a metal suit and the woman.  As it turns out, the sick man from before was actually Sherlock Holmes' brother Mycroft, although he is called Thorpe here.  Why, exactly?  He is out of his wheelchair because he has found a way to wire his damaged neurons and synapses into...a metal suit of armor.  Yes, they combined their rip-off of a Robert Downey Jr. film with another Downey film- Iron Man!  But wait, it gets better!  Myc-thorpe has made a bunch of robots, including the squid and the dinosaur- all without anyone noticing.  The blacksmith was working with him, but got killed for trying to turn on him.  The woman is a robot, because...well, why not?  The reason for Thorpe-cro's illness- being shot by Lestrade during a bust.  That's right- he used to be a cop!  With his foes captured, he has a tied up Lestrade in the next robot- a giant, flying dragon- that he will use to destroy London and then blame Lestrade for it.  Yeah, that makes sense in so many ways!  As a bonus, his lady robot is wired to explode after walking over to Buckingham Palace- again, why not?!?  Holmes chases his evil brother is a machine-gun mounted flying machine that is kept in running condition and takes down his brother, while Watson stops the lady after she kills all four guards at Buckingham Palace.  After telling his tale, Watson instantly dies.  Can I join you now? 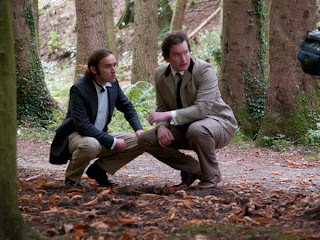 Yeah, this movie is really bad.  At times, it is dull and listless.  The dreary brown and light green of the fields does nothing to draw your focus.  At other times, it is oddly-dramatic and compelling, even if it is at the cost of logic.  A dinosaur is always eye-catching, even if it is in CG that internet critics can pull off!  This whole thing is pure bullshit though.  The Asylum has to always make a movie about stupid CG monsters- even if they don't show them- and 'mockbusters,' so that's a given.  The idea of using it with this license is just supremely-stupid though!  Even if you get past that...somehow, the actual bits with Holmes and Watson are just not that interesting.  All the interesting has been sucked out of Holmes (don't visualize that, please) and Watson is...even duller than Watson usually is.  The only funny Watson is from John Cleese's Holmes movie and that guy was an idiot with bionic ears!  Nothing about this movie is genuine, good or all that interesting.  If you want something mind-numbingly stupid to insult, this is good for you.  On the plus side, it was better than Monster.  Of course, watching Blood Freak whilst having my ears poked with a hot iron is better than watching Monster! 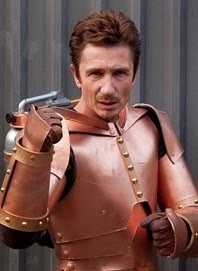