After one full year and 559 posts, what else can I cover?  A lot, actually, but that's not the point.  To celebrate this once-a-year event, I need a film that symbolizes everything that Mondo Bizarro is about.  I need a weird movie- one whose plot is bizarre.  I need a funny movie- one whose production values are equal to that of a school play.  I need an obscure movie- something that most people would not even bother trying to track down.  Then it hit me: Time Barbarians!  This obscure little film from 1992 stars a former American Gladiator as a warrior who seeks vengeance wherever it takes him- even to the future!  Do I even need to say any more?  I mean, the movie is practically a rip-off of Beastmaster 2- a movie that was pretty bad to begin with.  Break out your Deloreans for my review of... 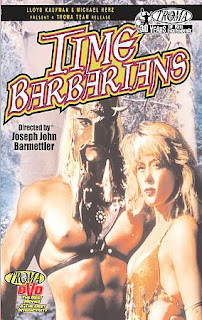 The film begins with pretty much zero explanation.  We have some woods, a muscular guy and a different muscular guy in a mask.  The latter is supposed to be crazy- as evidenced by his constant laughing.  Well, it's either that or he's the long-lost son of the crazy boat captain from Frankenstein Island.  The two of them fight and boy is it...average at best.  They sword fight like men who just learned it for the movie and toss it some halfhearted judo moves to 'spice things up.'  Guys, when your fight choreography is something me and my friends could pull off for our failed movie (Highlander: Heritage), you should feel bad.  The good, bulky guy wins and takes the man's mask.  While walking back, he sees a pretty woman in a two-piece lady barbarian outfit and decides to stalk her.  After about five minutes of this, they fight and he knocks her down...only to take off his mask and reveal that it was his wife.  That's weirder foreplay than the couple who fake UFC-fought as foreplay in 2001 Maniacs.  I have to stop and mention the use of dry ice here which is rampant.  The shit is all over these woods for some reason & are actually seen more often than lens flares in the recent Star Trek films!  Our hero is the King of a small tribe of villager who seem to number about twenty people strong.  Geez, even I have more followers than that!  All is not well, however, as an evil villain named Mandrak lurks in the shadows.  When our hero and his friend go off to hunt, he attacks a group of woman at the river- two of which are randomly topless.  They kill all of them save for the Queen, who gets captured. 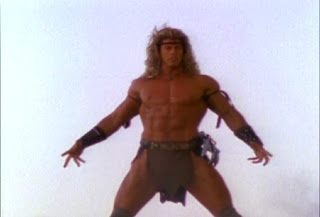 Right before the end of the fight, our hero feels a shard pain with that of his wife.  Why?  Good question.  He says that he has to help her and runs back home.  While he does this, our heroine is raped (they show nothing) and killed by the villain after she spits on him.  Yes, taunt the man with a knife to your throat, honey!  He leaves and our hero arrives the next morning.  Despite being wounded during the day, the other woman lives long enough to tell him what happened and die instantly.  She also gives them the cut-off hand of the villain, which proves useful later.  At the Queen's funeral, he vows to never rest until he kills Mandrak.  After a nice rest, he goes out the next morning to see the only wizard in the county.  He has to see her, you see, because the wife lost the magical amulet that apparently protects its wearer and their people.  In case you were wondering, she did not stop to put it on for the fight.  While they are out, a group of people attack him and his companion.  This is revenge for that pointless sword fight in the beginning.  Outnumbered, the man's companion is killed and he is captured.  That night, the wizard appears before our tied up hero and she is pissed.  She explains that she held the amulet for centuries- despite a story earlier about it being in his family since his grandfather- and that she will curse his tribe if he does not return it.  She sets him free after her speech and gives him a sword that allows him to travel forward in time to catch our villain.  Well, it worked in Darkest Knight 3! 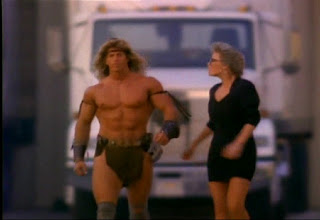 In the present day...of 1992, a lady reporter (played by the same actress who played the Queen) is attacked during the taping of a story about rampant gang violence.  Thanks for the subtle irony, movie!  Our hero pops out of...well, nothing and saves the day.  All of this is caught on tape by the lady's cameraman who pines after the lady.  Yeah, good luck with that, now that Malibu is in town.  Faster than you can say 'steroids,' he beds the woman due to her similarity to his dead Queen.  His heroics make the news and alert his two time-strewn enemies to his presence.  Since these guys are complete wusses, their first act is to buy guns from a man who foolishly sells loaded weapons to people he does not know.  Guess what happens to him?  The villains attack the station owner and shoot him in the head, although he lives long enough to warn the cameraman who shows up too late to help...again.  They show up at her apartment and get their asses kicked until they shoot the hero in the shoulder.  Don't worry- he gets better.  Before they can kill him, he pulls out his film-edit/magical sword, but they kidnap the woman.  He leaves his henchman behind, however, who feels when he learns that our muscular hero can block bullets with a broadsword!  They figure out where the bad guy is due to some matchsticks in his pocket- sigh.  At his base, the villain shoots at our hero, who does  the same trick again.  After a short fight, the man is killed and our hero returns to his past.  The End. 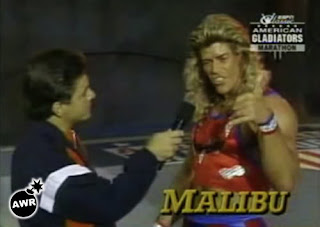 Yeah, this movie is not good.  It's a low-budget action movie with bad acting, bad writing and a silly premise.  On top of that, the whole time-travel aspect really only takes place in the third act.  At least Beastmaster 2 got to the point a little bit quicker!  Our star- Deron McBee- never broke out of the action movie mold he was placed in.  The reason for this is obvious when you watch the movie.  On the plus side, he did get roles in both Anna-Nicole Smith's Skyscraper and Mortal Kombat: Annihilation.  Our villains, on the other hand, are no match for the hero.  Hell, they barely manage to take out the barbarian women!  The whole thing is very anti-climactic and could have served a dozen or so people to serve as fodder.  Our villain barely has enough henchmen to help him move into a small apartment, let alone rule a kingdom.  This movie is stupid and worthy of its obscurity.  That said- if you like stupid films, this is pretty fun to laugh at. 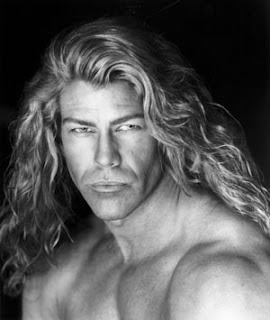 Up next, an obscure horror film about a creepy hotel, a German festival and Barbara Bach.  It's...something.  Stay tuned...
Posted by Alec Pridgen at 3:02 PM