Stuart Gordon is not the biggest name in horror, but he deserves a much higher ranking than he has.  The man brought us the Re-Animator films, From Beyond, The Black Cat from Showtime's Masters of Horror, not to mention the highly-underrated Stuck from 2007.  His work with veteran character actor has defined him in the same way that Dario Argento's work with his daughter has defined him- for better or for worse.  Today's film is a movie made for everyone's favorite direct-to-video source for low-budget horror: Full Moon.  For some reason, this DVD is very hard to come by, despite the film coming out in 1995.  I can buy a box set of every Demonic Toys crossover film, but this is hard to find?  This movie is interesting, because the Gordon/Combs films are usually notable for their dark humor, but this film is played 100% straight.  Does a change of formula work?  Find out my review of... 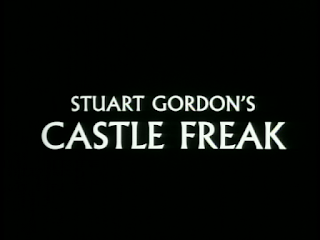 The film begins with an old woman walking to the dungeon area of her castle and whipping an unseen creature.  Damn, that's bad...unless that's Uwe Boll.  If so, put your hips into it, woman!  Unfortunately for her, she goes to her bedroom and dies of heart failure.  After a long title sequence of white text on black screen- no budget for title work, huh guys?- we get introduced to our heroes: a family.  The father is Combs and his wife is played by Barbara Crampton, another Gordon alumni.  The family is not happy due to a rough tragedy that took place less than a year earlier.  In a nutshell, Combs was driving the car drunk and got in an accident that killed their son and blinded their daughter.  By the way, I would have thought that you would have been above the 'blind girl in a horror film' cliche, Stuart.  Anyhow, the dad just wants to take an account of what the castle has in it in order to be able to sell it.  While out checking the place with his daughter, the girl wanders off near the dungeon while following the cat from earlier.  She heads back when the dad calls her, but the feline becomes freak food.  What?  It's what they call him!  Seriously though, the monster frees himself by biting off one of his thumbs and pulling the chains loose.  That's commitment, people! 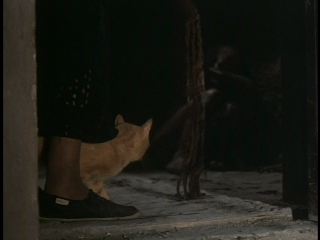 The daughter insists that there is someone else in the castle, but nobody believes.  Not believing the youngest cast member about an obvious threat- add that to the cliche count.  The freak wanders around and smashes up a mirror, a result that does not interest the police.  After another night of rejection and being told that his wife is going to punish him 'because God didn't,' Combs goes to a bar and gets drunk.  Being the smart guy that he is, he takes her to the castle, but decides to break it off.  Unfortunately, the loose freak captures her.  The next day, the police question Combs about her disappearance & want to investigate the castle, something that angers our hero.  Meanwhile, the monsters puts his Radu-like paws all over the woman, before she tries to break free by stabbing him.  Unfortunately, this does not work and the monster bites her nipples off.  Oh and he kills her too.  The lady who works at the castle stumbles across this and gets a face full of chain for her troubles.  When the police find this scene, it naturally looks bad for Combs.  This is where the movie's lone joke comes in as the inspector tells Combs to consult his lawyer, who proceeds to choke him.  Why?  The woman was his sister.  For a Gordon joke, it's actually quite light. 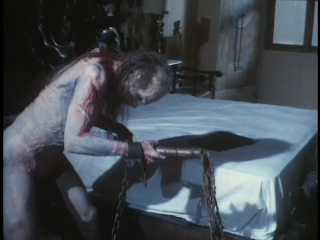 The movie gets really weird in its wrap-up, but stays just as bleak.  We eventually learn that the so-called freak is actually the long-tortured son of the former-owner.  You see, her husband left her after she had the kid, so she takes it all out on him.  Forty-plus years of torture and malnourishment turns you into a ugly monster with no privates apparently.  He's supposed to have them, mind you, but they never put them on the suit...not that I wanted to see that.  Combs figures this out, but is too busy being beaten up by the police officer to help.  The man takes it badly because the prostitute had his child.  The monster finally makes his move on the daughter, waiting until she takes her shirt off- classy, movie.  He brings her down to the dungeon, but the mom rescues her.  A nice bit of running and hiding takes place before our heroines break the cardinal rule of fleeing a killer- they go upstairs.  In fact, they run to the roof during a rainstorm.  Really, ladies?!?  Combs makes his way to the castle in record time and actually kicks the monster's ass.  It turns bad when he starts to get whipped, leaving him no option but to jump off the roof and take the monster with him.  Um, why not just push him?  As the film ends, the girls are alone, the cop is going to raise the kid and all is not well.  Hurray? 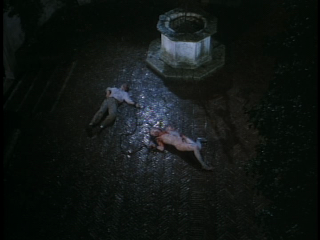 This movie is not bad, but is definitely what I expected from a Stuart Gordon film.  If anything, this more resembles a Ted Nicolau film that is just done more competently.  On one hand, I can admire Gordon's attempt to branch out and do straight horror.  On the other hand, this movie is extremely bleak and downbeat.  He wanted to play the threats as real, not realizing that the whole plot is a bit on the far-fetched side.  That's ignoring the fact that they have Combs playing someone of Italian descent!  The make-up work is well-done, although they do make smart use of a blanket to cover the creature.  The blood work is on par with most Gordon films and Combs does a commendable job of playing a deep, dark character.  He shows that he can play a character unlike Herbert West, although he is damn good at that role!  If you like your horror dark and gritty, give this one a look.  If you prefer classic Gordon, check out the Re-Animator films again. 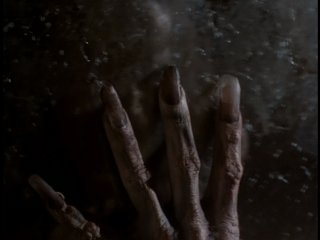 Next up, a long-lost Amityville Horror film.  When there are 8 films and this one is hard to find, what does that say?  Stay tuned...
Posted by Alec Pridgen at 11:52 PM