The place- Bulgaria.  The time- 1989.  The scenario- make a movie about kids trapped on a runaway train by Satanists (don't ask).  The goal- somehow pretend that this is related to a movie about a possessed woman and a crazy one haunted by her dead husband.  Unlike the last film, little effort has been done to recover the film from the spectre of being a fake sequel to a film that wasn't all that good to begin with.  The official DVD does not have the original title- Amok Train- although the sleeve and all promotional work do.  Although, to be fair, the original Beyond the Door actually begins with an alternate title- The Devil Within Her- and only displays its real title at the end.  It's sort of like that new trend in comic book writing of putting the story's title on the very last page...only dumb and confusing.  It's not like this title saves the surprise, since it says more about the plot than the real title.  Back to this bad movie though- it stars Bo Svenson...not that you can tell due to his silly goatee and odd performance.  This is really bad, so why delay it any further?  This is... 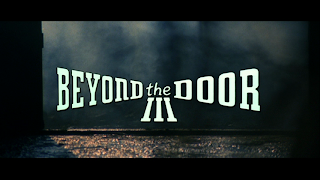 The film begins with a group of students being taken on a trip by their teacher (Svenson).  Oh and they also credit a woman as 'The Gipsy,' which is sad.  I've lost all hope for a good movie before the movie really began!  Right away, logic is gone too as Bo appears to be a community college professor who is taking his class on a trip to a village in the middle of Bulgaria.  What kind of group signs on for this?  What kind of students would take the trip?  Every one of these students is American-looking, so it's not a Bulgarian class going out to the woods.  Just pretend that part makes sense and move on.  They go to a village via train ride and discuss the Passion Play- light conversation.  Bo explains that the Passion Play predates Christianity or some bullshit.  The group makes fun of one girl for being a virgin, causing Bo to scold them.  He gives her a little speech about virgins are honored by certain societies, which is neither creepy or foreshadowing.  They arrive in a village full of creepy men and ugly women and are told to go to bed, despite it looking like mid-afternoon at best.  While they sleep, the villagers light their huts on fire and lock the doors.  All of our heroes flee, save for one who is possessed/hypnotized and just stays there.  Um, okay. 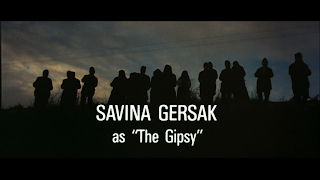 All of our heroes flee from the village and jump onto a passing train, all but our heroine.  The lead guy jumps off to keep her company...or something and injures his ankle in the process.  Boy, was that dumb!  The group tries to get some help, but the train won't stop until a few days from now.  While they are waiting, a mysterious person wanders around in a sub-plot with little pay-off.  Out on the woods, our hero is being dragged along by the girl- role reversal, I guess- as weird people follow them for no clear reason.  Meanwhile, the group is stuck on the train because...um, why are they stuck again?  As the original title would imply, the train is 'amok' and is apparently being controlled by some evil force.  Could it be- oh, I don't know- SATAN!  For whatever reason, the thing will not stop and is not being run by anyone, as evil magic on the train killed the conductor and engineer on the earlier night.  Our heroes are apparently too scared to get off of the train at the speed it's going, so their solution is to not try and do anything.  We get some scenes of the train crashing through the woods, which make the miniature shots from Inglorious Bastards look like Star Wars by comparison.  Give me some pay-off, movie! 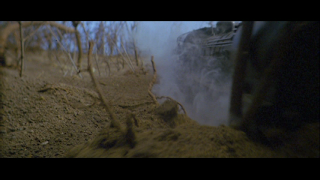 Eventually, our two heroes manage to get on the train, but that's because the force wants them to.  You see, they want our heroine for an evil sacrifice to Satan...not that you did not already guess that.  As the ride continues, our heroes get picked off by the evil force.  One of them is possessed to freeze while hanging on the outside of the train and gets impaled by the railway marker when they pass it.  Another one gets mauled by the tracks itself while trying to save the girl from falling.  You don't need the lower half of your body, do you?  Eventually, the bad guys stop the train and take our heroine for the sacrifice.  However, they failed to realize that the spirit of a Christian Saint appeared before the young woman and had sex with her.  No, I'm not making that up.  This causes the weird creature- looking like a small version of the demon from Conan the Destroyer- to explode & the cultists to flee.  Our heroine calmly leaves and goes to the airport.  We see this via a tracking shot through a crowd of people who all stop to stare at the camera.  Seriously, guys?!?  The ghost of the Saint appears to our heroine and then she gets on the plane.  During the night, the monster appears again and attacks our heroine through the window...only to be a dream.  You've going to end on a Big-Lipped Alligator Moment, guys? 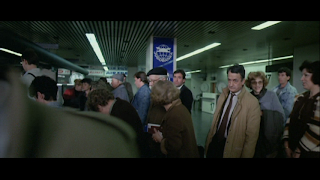 This movie is not good for a lot of reasons.  The whole premise is just odd and makes very little sense.  The bad guys bring a group of people out to the woods when they only need one?  When the target escapes, they take control of a train...that she's not on.  Even if she was, what was the point of trying to make it crash through everything?  The acting and writing are not good here & neither are the production values for that matter.  Why cast Bo Svenson in such a role?  He's not low-key enough to be sinister or melodramatic enough to be crazy.  Bo has all the range of a piece of string, guys!  You can do much better for your choice of movies and your time.  Let's move on. 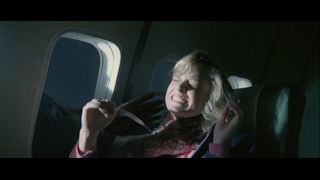 Up next, Rare Flix returns with a made-for-cable remake of Roger Corman's dark comedy classic.  Is it good?  Does it have a multitude of comedians in early, cameo roles?  Stay tuned...
Posted by Alec Pridgen at 1:33 PM