Let's get this out of the way: I have a good reason for not doing Maniac Cop 2.  Well, I'll tell you.  You see, that film has Bruce Campbell as one of the leads- carrying over his role from the first film- but kills him off about thirty minutes in.  Why?  There is no good reason.  Why would I give this film a chance then?  Because it has voodoo!  It also stars sub-par actor turned arch-conservative Robert Davi and Robert Z'Dar...not like he had anything better to do.  If your career includes Soultaker, Samurai Cop and three Maniac Cop films, you have no better options!  Another carryover is Larry Cohen, who again wrote the screenplay.  What can I say- he's a quirky guy!  Series director William Lustig is also on board to finish out the series...until he just walked off the set one day.  Considering his last real film work was directing Uncle Sam in 1997, I'm going to go ahead and say that he made a bad call.  Speaking of bad calls, shine up your billy club for my review of... 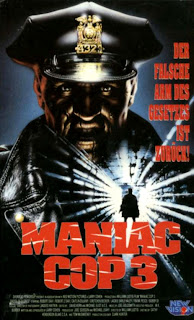 The film begins with the titular character walking down the street and revealing the knife that is hidden in his billy club.  As my friend- and unofficial co-reviewer for the film- said at the time 'it's not exactly a hidden weapon if you have it out all the time!'  He kills a random guy and gets off his head, leading to the introduction of Davi's character.  He takes the whole 'headless corpse' thing pretty well, although one rookie does vomit at the site.  Back at the precinct, he bonds with a lady cop over at the shooting gallery.  This is Robert Davi, of course, so this scene is bereft of passion and chemistry.  We are treated to the site of a weird voodoo man showing how he brought back the undead cop to life.  Thanks, but I don't really care.  A bit later, a crazy man robs a convenience store and it's...Jackie Earl Haley!  Holy crap, this movie just got good!  Haley plays a crazed, bearded man who is robbing the store to get the drugs.  A crazy, unbalanced guy- man, Haley has range!  One highlight involves a man flying upwards into the air after Haley fires a shotgun blast at the ground.  Good-bye, physics. 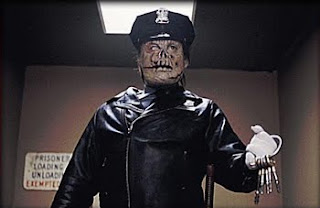 The lady cop from before shows up and comes up with the brilliant plan of climbing onto the roof, dropping through a glass skylight and...failing to do anything before the bad guy sees her.  Yeah, she gets shot, but not before wounding Haley and killing the attendant, who was apparently in on the thing.  Our hero is struck by this personal blow to...this woman he talked to in that one scene and hit on.  He gets over it pretty quickly, though and starts hitting on the lady doctor at the hospital where the woman is staying.  For some reason, the villainous cop has taken a shine to her after hearing about how she was gunned down in the line of duty and wants himself a lady.  We're taking plot points from Frankenstein Created Woman now, huh?  By the way, random cameo from Ted Raimi as a news reporter covering the story.  He shows his devotion to her by killing a random car jacker in sensational fashion.  He tosses the guy into the air and shoots him like skeet.  That's... sure something.  He also kills some random people in the hospital, including the jerk doctor who gives up on helping the lady doctor.  He kills him by over-using the defibrillator pads on him- ha ha ha irony. 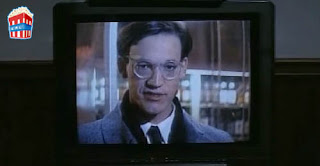 Our hero does not take the news about them giving up on helping the lady cop.  That does not stop him from starting a romance with the doctor still, nor does it really cause him to raise his voice all that much.  Incidentally, the robber is kept in the same hospital.  Yeah, that's a bad idea.  Speaking of bad ideas, Robert Forster shows up for one scene as the replacement doctor, but is killed mere minutes later by the undead cop via exposure to an x-ray machine...for about five minutes.  The cop also sets Haley free and arms him, setting up a pointless action scene.  Sadly, the man is killed while hiding in a toilet stall.  Great- now I'm just stuck with Davi.  Anyhow, our hero and the lady follow the cop after he steals the lady cop's body & heads into the tunnels under the hospital.  Apparently, they connect all the way to an abandoned church now occupied by the voodoo man.  The ritual to resurrect the woman ends in defeat, so the priest gets a stomach full of lead.  This leads to a big, fiery climax involving the titular cop being lit on fire!  As our heroes drive away, however, he shows up again & chases them...while still on fire!  He does the entire chase scene while on fire, in fact!  It ends after he gets his flaming arm cut off and he crashes into a parked van.  The End. 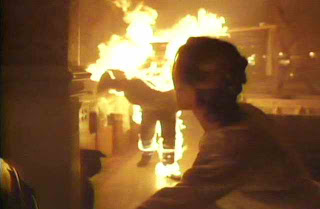 This movie is...well, not that good.  The story is stupid, the acting is not that great and even the maniac cop is barely shown in full-screen.  Clearly, the budget was lower here as he is often shown in silhouette or in shadows.  How can you make a film about a mutilated Robert Z'Dar and not show me the goods?!?  Even so, this film has a pulpy air to it that makes it hard to stay mad at.  It's like that weird-looking puppy that breaks everything- part of you just has to love it!  Haley is great fun in the role and Z'Dar does what little the script asks of him just fine.  It's fitting that we get a Ted Raimi cameo, since the first film has Sam Raimi in those duties.  In fact, that actually is a good symbol of this movie.  We start out with Sam and Bruce Campbell, lose both of them and end up with just Ted.  Sorry, buddy- you're still the best victim in Midnight Meat Train. 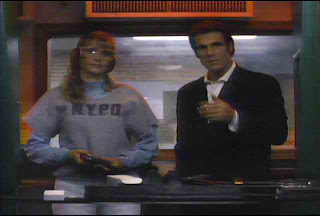 Up next, I close out another Cop series with the third film in the Cyborg Cop series.  More robots!  More kung-fu action!  More fanny pack action!  Stay tuned...
Posted by Alec Pridgen at 11:34 PM