Indulge me for a moment as I state the obvious: Uwe Boll is a terrible director.  His body of work speaks for itself, really.  When one of your films can be summed up by an internet reviewer in these four words- Dave Foley- full frontal- you are not someone to be admired.  Hell, I've sat through In the Name of the King- "Nearly three hours- really?!?"- and House of the Dead- "Clint Howard = best actor"- for this site.  I mention all this to set-up the fact that Mr. Boll did not direct this movie.  When even Uwe refuses to dignify this movie with his 'talent,' what does that say?  Mind you, he is still the producer, although that could just stand for 'the guy who paid $50 for this license six years ago' for all I know.  You want more proof that you should not expect much?  How about the fact that this film was made in 2008 and only came out this year?  Yeah, that should do it.  This is... 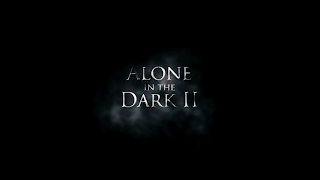 The film begins with a man (Postal's Zack Ward) doing drugs in the Central Park bathroom, only to get interrupted by a bunch of armed people in coats.  Man, who hasn't been there?!?  These folks, it seems, are being chased by the 'Evil Dead' cam.  Man, people love to rip that off, don't they?  They know it's just a man holding a camera mounted to a board, right?  This monster comes in the form of a bunch of CG wisps of smoke- apparently it's the love-child of Lost's Smog Monster.  To combat this monster, our heroes are equipped with...automatic weapons.  Is there a logic to this or did Uwe just say 'more guns!  more guns!'  They all get killed as the title card appears in it barely-visible form.  A bit later, we see the lone survivor was the man in the bathroom stall and he is looking for some help.  Dressed up in his best inFamous cos-play outfit, he hires a paranormal investigator (The Fifth Commandment's Rick Yune) to help him out.  They return to the scene of the crime (good re-use of the set, Uwe) and retrieve a mysterious knife that is apparently the key to everything.  Before much explanation is given, we see that the drug-user was infected with the black ooze from The X-Files and stabs our new hero with the knife.  Another group of people show up and finish off the dying Ward, while deciding to take Yune with them.  More heroes?  Really? 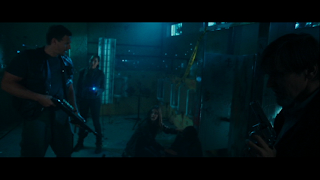 Yes, really.  These people are the real heroes of the movie and pretty much just drag our hapless Asian man along for the ride.  The villain of this picture, you see, is a witch.  Gee, I guess Boll saw Argento's The Third Mother and said 'I can do that!'  They explain that she is evil and all that jazz.  Apparently, being infected by the knife's magical power via stabbing makes you relive the witch's final moments.  Oh yeah, don't look at the mirror in your dream or the witch will know where you are.  Instead of explaining this, I want to focus on the group of heroes.  It's a who's who of people who can't do any better.  You've got Ralph Moeller (Boll alumni and star TV's Conan), Bill Moseley, Danny Trejo (future star of Machete) & Sean Connery's son Jason.  Fun fact: Jason's biggest credit was playing Robin Hood on television...25 years ago!  The first dumb thing our heroes do is leave the wounded Yune alone with the gun while Moeller goes out for a smoke break.  His escape attempt does not go to well and he decides to stay after everything is explained to him.  Unfortunately, he looks in the mirror and alerts the witch. This sets up a ludicrous action/suspense scene that pads the run time by about ten minutes.  A group of them stay in a cage, while the witch kills Trejo, Moseley and a few others.  The high point: the woman trying to gun down the witch with a mounted machine gun! 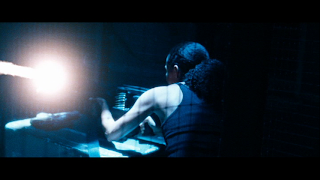 After this attempt ends so badly, our heroes finally recruit witch-killer and veterinarian Lance Henriksen.  Keep an eye out for how quickly the death of her father (Moseley) is lost on our heroine.  Anyhow, she tries to contact the witch to deal with her personally...for some reason, which gives us a pointless effects shot.  It also sets up the idea of having to kill the witch with bullets dipped in some sort of magical goo.  We get another long sequence where Yune and Henriksen have to decode some mystery of how to locate the witch (see my Third Mother comparison earlier).  Eventually, they figure out that her burial ground is in...Central Park.  In case you didn't get it, this is supposed to be like the next-gen console game & not the last movie...or the other games.  They wander around, find the way in and battle the witch.  Sadly, Moeller bites the dust in an off-camera exchange.  The fight is mostly chasing, but does end in the watch being killed back in the park.  The point of them going in the cavern was what again?  Back at Henriksen's place, it's revealed that the young woman was possessed by the witch and shoots Henriksen twice, but does not kill him.  After a fake-out, our hero drowns the girl in a bucket of water, which destroys the witch.  Of course, we also get the sequel bait ending with the blade flashing.  Who cares? 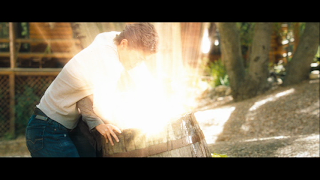 This movie is bad for a lot of reasons.  For starters, why the hell is it called Alone in the Dark II.  It's not related to the first film and has no recurring cast members.  I get that they wanted to market it around the game- good job, since your movie came out two years later- but why this title?  How about Alone in the Dark: Season of the Witch or Alone in the Dark II: This Time It's Not Alone in the Dark 1?!?  The acting ranges from dull and wooden to hammy and over-the-top.  Basically, if they are talking, they have no personality.  If they are firing a gun, they think that they are Rambo.  The special effects are not bad, but they are also clearly CG effects.  Is it any wonder why this movie was put on the shelf for two years?  Thanks for pulling it from the vault to torture me, guys.  I could have spent 90 minutes doing something constructive.  I mean, I wouldn't have, but that's not the point! 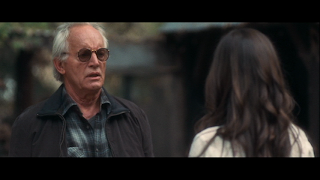 Next up, I close February out with a film about killer annelids.  How often do I get to say that?  Stay tuned...
Posted by Alec Pridgen at 11:41 AM