Let's address some serious confusion: Cyborg Cop 2 is actually an unrelated film starring two new cops who have to battle a cyborg menace.  That movie is mostly known by the title Terminal Impact.  This film, however, features the return of David Bradley to his role as the man who defeats killer cyborgs.  However, this film is also known as Cyborg Cop III in some circuits.  In the closest to an official DVD release the film has, Terminal Impact is billed in parenthesis as Cyborg Cop III and Cyborg Soldier is known as Cyborg Cop II.  Confused yet?  Good.  After much consideration (about two minutes), I'm going to stick with II for this film, as it is at least the same lead actor and character.  This is... 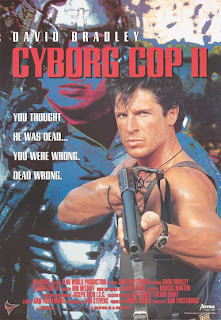 The film begins with a long, dumb action sequence over the opening credits- big surprise.  It is also billed as Cyborg Cop III, which is confusing because...yeah, I already did that part.  A bunch of men drive around in a truck and lazily shoot a bunch of other people.  So, you know, any given Tuesday in Texas.  All of this builds to a showdown between a man who looks like an evil Kurt Angle and a drug dealer who hides behind a sheet of glass.  By the way, pointless breast shot to up the Rating to R.  Fortunately, a bunch of cops from the DEA show up.  Hey, how did Bradley get back in the DEA after quitting in disgrace again?  You won't tell me, huh?  Okay then.  Bradley and his token black partner show up to take down the bad guys.  Wait- token black guy surrounded by gunmen?  Quick- put on a vest!  This proves too late, however, as he is shot to death by the villain.  This leads to even more shooting and a silly showdown between Bradley and the villain.  Naturally, our hero wins and the bad guy ends up in jail.  However, a government program recruits him- alongside other Death Row inmates- to become cyborgs.  We get a flimsy explanation for why the government is doing this, considering that it was done last time by a crazy arms dealer!  The cyborgs also get ball caps that double as circuitry.  Lazy prop design- check. 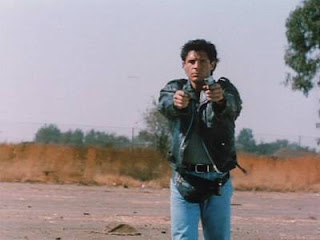 When the man he put behind bar vanishes, Bradley gets right to work...ignoring his superiors.  Why did you rehire him again, guys?  He finds that the secret government agency is keeping tabs on him, which is something he does not like.  He proceeds to harass and attack the guys, clearly copying his own behavior from Cyborg Cop 1.  You do realize that these are government employees and not lackeys for a gun runner, right?  He also breaks into a government building and steals some files about the group.  Of course, this proves to be the right thing to do as the now-cyborg killer throws off the shackles of his creators within minutes of being given life.  With a group of armed cyborgs, he begins to kill anyone that gets in his way.  He crosses paths with Bradley at a gas station where they do battle.  It's all completely silly and ends in a giant explosion.  Watch for Bradley's dive away from a big fireball and see if you can spot his suddenly-wet hair for one shot.  Can you spot the fire-retardant gel?  The battle ends inconclusively and the cyborg gets fixed up.  Thanks- that served...nothing. 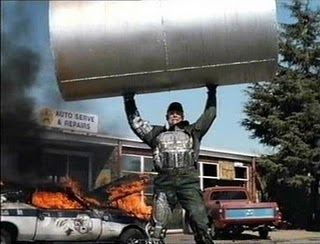 The bad guys recruit a bunch of new cyborgs since, apparently, the organization decided to make 100 cyborg soldiers in the first, trial batch.  Meanwhile, Bradley finally meets up with the head of the government organization who is, of course, a hot woman.  They flirt, she blows him off and they flirt some more.  Between recruitment, the cyborgs find time to kill Bradley's crotchety Sheriff buddy, who is the fill-in for Norris' pal in Lone Wolf McQuade.    On top of that, they kidnap Bradley's kid.  Actually, if you recall, this is actually the kid that his brother/partner adopted before his death in the first film.  Apparently, he just kept the kid, but dumped the lady from that movie.  This leads up to a big battle where Bradley and the government lady break into the cyborg facility & blowing up the guys.  It's all ridiculous, but great fun if you like to see dime store mannequins be blown up.  Seriously, you get about six shots of the stand-ins being exploded- good fun!  The lead cyborg holds the kid hostage until Bradley would fight him.  It ends with the kid grabbing the cyborg with a giant magnet- wouldn't they get rid of those- and dropping him into a pit of fire.  The day is saved...thanks to the kid.  The End. 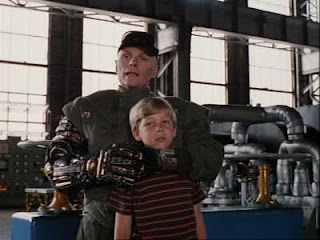 Honestly, this movie is good fun, but it is also terrible.  I won't lie to you and tell that this is a good movie- it's not.  That said, Bradley is the weird combination of both wooden and over-the-top.  Picture a dull actor playing Andrew "Dice" Clay and you get the picture.  The acting is all bad and the writing is just silly.  On top of that, the cyborgs are men in green jumpsuits and metal arm-coverings.  When you see them for the first time, they also have Optimus Prime-style chest plates.  Silly- very much so.  If you like stupid movies, you can do far worse than this movie.  If you like good movie...why are you even reading this?  Go watch The 400 Blows and move on. 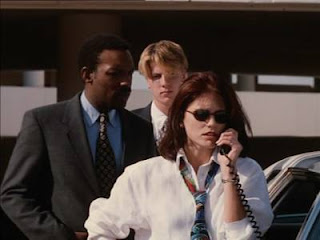 Next up, an 80s adaptation of a French comic strip starring the chick from the Whitesnake videos.  This...will be something.  Stay tuned...
Posted by Alec Pridgen at 11:42 PM