What happens when a good idea comes back to hurt you?  A little while ago, I came up with a series idea between myself and Carl at I Like Horror Movies.  Being the nice guy he is (and with about four times by reader count), he agreed.  To his end, he has reviewed The Capture of Bigfoot, a movie reviled by Lloyd Kauffman himself!  Now it's my turn and he gave me an obscure, French zombie film that reports to be a sequel to less-obscure French zombie film.  I take back the 'nice guy' comment now.  Thankfully, the film is on Instant Viewing, so I only had to defile my X-Box 360 with this film instead of the U.S. Postal Service.  So what is the plot?  Toxic waste brings ladies back to life as zombies.  That's about it.  There's plenty more to talk about though, so let's get to it.  Drink your milk as we check out the... 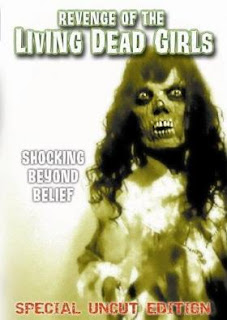 The film begins with a young woman being picked up by a truck, only to hurt her ankle walking approximately two feet.  This is clearly a Feminist tale.  He drives her a bit down the road while a man on a motorcycle follows them.  He takes her into a barn to rest while he goes to call an ambulance, but he fails to notice the man on the bike pouring a chemical into the truck (which contains liquid of some sort) compartment.  We jump-cut to a woman eating breakfast in her underwear as her mother talks about her upcoming wedding.  She takes a drink of milk and dies.  A bit later, two young women at a bar take a drink of milk and die.  Well, you are drinking milk at a bar- you expected it to not kill you?  All of this relates to a chemical company that was illegally-disposing of their chemicals.  The guy on the bike was an agent of theirs, but he feels bad about the deaths.  He's blown off by his female boss, but trouble is still afoot.  There's another container of chemicals that he hid...in a cemetery.  This causes the three women to rise from you graves as zombies in silly masks.  Oh yeah, the one lady had a 'wedding sub-plot' as a pretense to have her kill people in a wedding dress.  Nice. 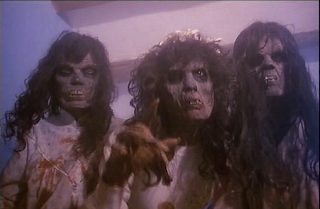 The plot goes off in a few odd directions for a bit.  One involves one of the company workers meeting with their German rep and her finding about his embezzlement.  This plot goes somewhere later, but it's not good.  A second sub-plot involves a scientist investigating the chemical spill, being called in by the cops.  One- that's a conflict of interest.  Two- the dumb-ass touches the running chemical with his hands.  What college did you go to?  I think that even the guys from How High would know not to do that!  His sub-plot is only here to pad out the run-time and set up a scene later involving his pregnant wife.  You know that this won't be pretty.  Another person from the plant investigates the spill, only to be killed by the zombie trio.  The scientist sees the attack, but doesn't report it.  Good call.  In yet another sub-plot, the woman from earlier hires a prostitute to have 'fake sex' with a man to get blackmail against him.  This goes nowhere, but does give us some pointless nudity.  Thanks- I guess. 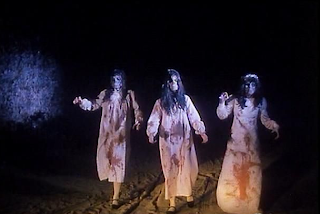 With so many sub-plots going on, it's hard to follow anything.  All you need to know is that the zombies come out to kill whoever they don't like and/or they blame for their deaths.  How do they know?  That's a good question.  This is evident when they attack a guy who hires a prostitute to have sex with him in the cemetery.  Wait- no, it's not!  To close up the scientist sub-plot, he meets up with his pregnant wife, leading to a gory bit of non-sequitur.  Okay then.  The guy and the woman from the company make a mutual agreement to hide the evidence and share the take.  They seal this with a pointless sex scene.  Yeah, I didn't see that coming.  Afterward, the guy goes for a swim and gets attacked by the zombies.  Yes, zombies in a pool.  They go after the woman next, but take a different form of attack.  They decide to disrobe- their bodies are normal BTW- and molest her.  This is pretty gross, but eventually ends in her being stabbed in her 'no-no place' with a sword and killed.  Between this movie and Patrick Still Lives, I've had enough of that scene, thank you!  The police catch on to the idea that something is afoot and burn the coffins, abruptly ending the film.  No, really. 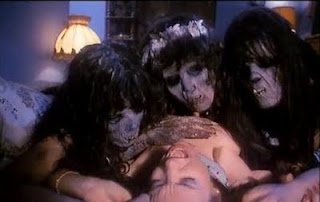 Ce film suce!  The plot of this movie has potential, but they kill it.  A gang of zombie ladies- I'm game.  Unfortunately, the movie is muddled down with 600 sub-plots, bad acting (even taking into account the fact that the streaming version is dubbed) and bad effects.  The masks are neat at first and would work for a one-off reveal.  You see more of them than you do some of the main characters though.  In addition, the movie kills the mask effect by having the zombies disrobe.  Mind you, this is a stupid idea no matter how the masks look.  However, they have the bodies look completely normal, so how does this zombifiying work?  Did I want to see naked zombies?  Hell no!  I shouldn't have to make a choice like that, movie!!!  The funny thing is that this movie has the opposite problem as Living Dead Girl had for me.  That movie was well-shot and well-written, but dull.  This movie is not well-shot or well-written, but too salacious for its own good.  I guess there's no middle ground, huh?  Take us away, troll-haired hooker...

Up next, Instant Fun Week II brings us a film about aliens, fighting and vinyl outfits.  Naturally, Charles Band is involved.  Stay tuned...

This film review is brought to you as part of Project Terrible: ILHM vs. Mondo Bizarro
Posted by Alec Pridgen at 11:45 PM