Vikings vs. Aliens!  With all the talk of Cowboys fighting groups,- whether it's in a bomb like The Warrior's Way or a possible hit like Cowboys vs. Aliens- I think it's fair to give someone else a chance in a movie that barely got any attention.  This 2008 film was released Direct-to-DVD and just sort of hung around for a long time.  Even now, how many of you have actually seen this movie?  How many of you have passed it on the shelf in a Blockbuster or other regional video rental store?  I know that I'm certainly guilty of it...or I was.  I finally saw this movie and decided to pass the knowledge on to you.  The plot involves an alien man crashing down in Norway, but he's not alone.  Can he face down a crisis that has arisen from his own past and make a new life?  Will he succeed where his people have failed?  Just to note- this is a fairly-new film, so beware of the almighty SPOILERS!  Shine your steel, because we're going to meet the... 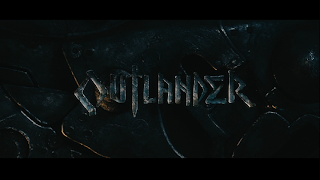 The movie begins with a ship flying through space and crashing down to Earth.  It's here that we learn that the Special Effects are actually pretty good here.  Could this movie actually turn out to be kind of good?  The man (Jim Caviezel) swims out of his craft and retrieves some items.  It's here that he first removes his Stargate-style armor.  Sadly, we never get to see it again.  He sets up a beacon that will signal his home planet's fleet, but it will take a few Earth days.  He also uses a device that zaps him full of the information about the world he's in and allows him to speak Nordic.  Oddly, Nordic sounds a lot like English!  The place: Norway.  The time: 700 A.D.  Well, of course it's A.D.!  Nothing happened in Norway in 700 B.C.!  While wandering around, our hero stumbles across a village full of dead bodies.  Great- he got lost and wandered into North Vietnam!  Actually, this is foreshadowing of what is to come and a major plot point for later.  He's captured and loses his fancy ray-gun, something else that we never see again.  He's taken captive and brought to a village of Vikings led by...John Hurt.  That's odd casting, right?  He has a red-headed daughter who is set to be wed off to a man that she doesn't love.  Thankfully, 'Jesus' is in town to make you swoon. 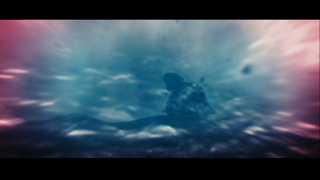 The Vikings are skeptical of the man's story, especially since all of his proof is at the bottom of a lake.  When a darkly-lit, CG monster attacks, they're a little more believing.  They let him go with them on a hunting expedition where they go into a cave and...kill a bear.  The village celebrates and our hero is wary of spoiling their good time.  Unfortunately, another threat lingers about on the outskirts.  You see, that village from before was under the care of a different Viking Chief (Ron Perlman) and he blames the others for it.  He attacks, leading to a decent battle where he is routed.  Him and his men wait out in the woods and plot their counter-counter attack when a mysterious beast picks them off one-by-one.  They flee into the other village, who initially just shoots at them.  It's here that the monster first makes his real presence known.  He's basically a mix of Godzilla and the monster from The Host, with a body that glows blood red.  It's freaky, to say the least.  The men agree with Caviezel to make a trap for the monster.  It's a tough thing, but they manage to get it trapped in a pit full of fire-water and light the sucker up!  Unfortunately, he's pretty fire-resistant- damn racial bonuses- and keeps killing.  On top of that, he/she has spawned a brood which attacks from the other side.  In the chaos, both Perlman (see Deep Blue Sea Moments) and Hurt are killed.  We're all boned, huh? 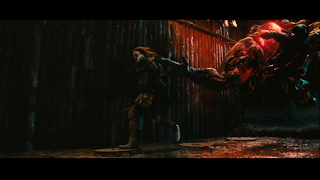 The villagers agree to move to a new home, since their weapons cannot kill the beast.  Caviezel, however, and gets a small force to stay behind.  He retrieves metal from his ship's debris and gets it made into some new weaponry.  Screw you, causality!  In a sad moment, he explains the origin of both himself and the beast to the Chief's Daughter.  Yes, an hour and twenty-minutes in is a good time to explain who the character is!  Basically, his race went around killing everyone and everything who had stuff that they wanted.  They nuked a bunch of these monster things, but not all.  One of them got on Caviezel's ship and killed many, leading to the crash.  In the present, Caviezel leads a small team to the monster's cave after the lead one captured the Chief's Daughter.  They go into the cave and face some stiff resistance, leading to most of the ancillary characters they brought along being killed.  So long,...um, Steve, was it?  It's a bloody struggle, but the little monsters are killed and the eggs are smashed.  However, 'momma/papa' is still there and he's pissed!  He kills the second-in-command guy and nearly takes out Caviezel before the Chief's Daughter comes to his aid.  In a dramatic scene, Caviezel stabs the thing as it holds onto him, causing it to fall.  He leaves the village and goes back to his signal device, being followed by the Daughter.  As his rescue ship comes, he smashes the console and they just leave.  Oddly-incurious lot, huh?  He buries the dead and leads the village to peace and prosperity.  The End. 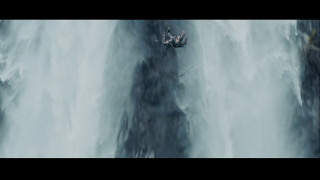 Norse mythology be damned!  The plot of this movie is certainly quirky, but I kind of like it.  It doesn't force itself on you too much, letting it flow naturally.  Unfortunately, the pacing is a little off.  The middle part of the film is a bit too long, focusing too much on Caviezel fitting in with the tribe.  That and a whole sub-plot about him liking this kid don't need to be here.  At 110 minutes, the movie could use a trim in a few places.  Even so, I liked it.  The Special Effects are good and the action is nice.  It's a good mix of bloody and subtle that works for me.  The acting is pretty good here too, as Caviezel plays his role with a subdued sense of fear and bravery.  Hurt is good here too and Perlman offers his usual sense of bravado to the film.  If you can accept the premise and setting, you can have a good time with this movie.  The monster alone is worth more attention than the film gets.  Even if you aren't a big fan of genre-bending movies, give this one a look. 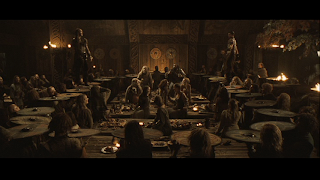 Up next, a movie that proves that role-playing games truly are dangerous.  That's right- they drive people to make shit movies like this.  Stay tuned...