Who doesn't love random serial killers?  A film was made quite a few years back called Joy Ride.  It featured a pair of guys (Steve Zahn and Paul Walker) who mess with a truck driver, only for him to be a vindictive bastard.  He harasses them and even goes after a girl they know (Leelee Sobieski) to boot.  The film was not really a big hit, but, again, the rich video market demands that anything that didn't totally bomb get a Direct-to-DVD sequel.  Sorry, Pluto Nash!  In this film, we have no stars- not even the truck driver voice-actor- and a film that alleges to be a sequel.  The premise- the killer is back to harass another trio of people who 'wrong him' in some way.  On the plus side, they aren't making shit up like White Noise 2 or Stir of Echoes 2.  Can this film rise above the stigma of its genre and deliver a surprise success?  Yeah, not really.  There is a lot to talk about though, so let's strap on in for a... 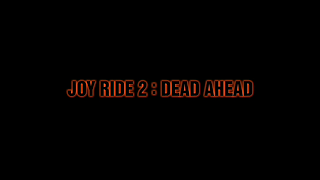 The film starts with a hooker coercing her way into a trucker's 'situation.'  She works her way into the cab of his truck, where he proceeds to be a complete jerk to her.  Incidentally, we never see the trucker's face here.  This is maintained throughout the film in an attempt to ape that of the original's ambiguous killer.  Here- it feels like they're just taunting you, since his face is always just out of view.  Anyways, the guy kills the young woman by tricking her into sticking her out out the window, sliding it up and running her face into a pole.  That's a lot of work when you could just shoot her or something.  As you'll see later, logic is not something usually attached to the kills you see here.  After the credits, we meet three out of the four heroes of the film.  Two of them are an engaged couple who are on a trip, while the third is the girl's best friend from college.  They're driving to Las Vegas to have the Bachelor/Bachelorette parties.  They stop at a Gas Station where the third girl meets up with an internet fling, who she invited to go with them.  In most films, this would be a set-up for the character to be the killer.  In here, it's just a plot thread that gets driven into the ground.  En route, the quartet's car breaks down and they have to walk.  Since the lead guy is Nick Zano, he has to have his shirt off.  Just get that requirement out of the way now, movie.  They stumble across a house and figure that it's safe to borrow the car parked there.  Yeah, bad idea.  As you probably guessed, the car belonged to the trucker.  He hasn't been in the house in months, but is still really, really obsessed with keeping the possessions there- interesting. 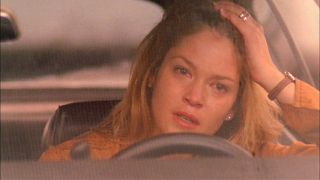 They actually pass him a bit later on the road, which creates an intriguing plot hole.  They take the main road back, but don't pass the guy on the way.  However, he arrives home what's supposed to be hours later and catches up to them the next morning.  It's not impossible, but it's a bit implausible.  He threatens them and kidnaps Zano.  Yeah, the biggest 'star' in the film gets kidnapped and barely plays a role here- nice.  Make sure to note that the trucker managed to follow the guy, blitz attack him, drag him out the back of the diner, get him in the truck and drive a bit away in the span of three minutes.  This guy is the freaking Flash!  He tells them that they have to do what he says or else he'll kill the guy.  His first request: he wants the best friend girl's middle finger, since she flipped him off earlier and 'gave him the bird.'  That's the stupidest serial killer logic that I've ever heard!  Desperate, our heroes go to a Morgue and cut the finger off of a corpse.  They go to the drop location, but the best friend girl and her internet pal try to sneak up on the trucker.  Over the phone, he asks her to walk in front of the truck and do a strip tease.  She does so before confronting the trucker and...it not being him.  She rushes back to the car, only to find Zano's severed finger.  He calls her on her deceit and says that he delivered on his promise to 'bring him back,' since he gave part of him back.  One- that's stupid.  Two- how the hell did he sneak up on them in a big rig, unlock her car, stick the finger in the glove compartment, run back to his truck and drive away again in less than three minutes?  You couldn't get that kind of speed with Acme Rocket Skates! 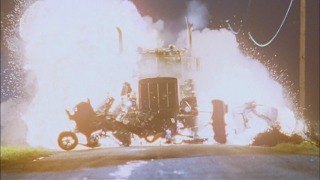 Things get even worse as the trucker next asks them to pick up some drugs for him a trucker location.  Oh yeah, he wants the internet pal to do so while dressed as transsexual hooker!  Good grief, movie!!  He says 'no' to the girls, so they pull out a Checkov's Gun in the form of a scalpel taken from the Morgue and threaten to kill him if he doesn't.  Who's the psycho killer here again?!?  He goes along with the plan under coercion and ends up being captured by the trucker.  Our heroines chase him, but end up being chased themselves- don't ask me how that happened.  The guy ends up crashing into the wreck of his car (see above) killing the best friend girl.  He goes back to his house with Zano and internet pal to torture them as part of some silly game.  Don't ask me to explain this either.  He kills internet pal with a piece of rebar through the head.  Ow. Our heroine manages to get a motorcycle and drive back, apparently just knowing where the guy went.  Thank you, lazy screenwriting.  All of this ends in a fight with our heroine driving the truck and the guy on the hood.  The truck goes over a cliff- which is about thirty feet from his house- and explodes.  In the Epilogue, we see the trucker still alive and picking up a new victim.  Um, how?  The End. 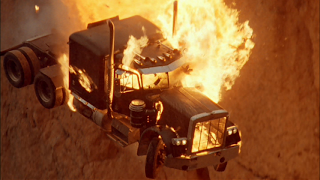 Don't hitchhike, kids!  The plot of this movie is dumb, attempting to awkwardly-rehash the original.  The problem- the original is not that good.  Even so, there is actual chemistry between Zahn and Walker- not in any gay sort of way, mind you.  In this movie, we get bossy girl, indecisive girl and poser guy.  Never mind that they turn on him when they realize the truth about him- his piercings are clip-ons and his tattoos are fake.  Hell, our Final Girl doesn't even seem to realize that he is dead.  Honey, he's dead because you sent him out there and got him captured- bitch.  This movie has the same problem that Smokin' Aces 2 had for me.  The plot and events just don't sync up in any logical way.  Things happen inorganically and simply because the writer(s) want(s) them to.  This serial killing truck driver is a mix of Sherlock Holmes, Jigsaw and The Zodiac Killer.  Not only that, but he has super-speed (see earlier) and super-strength.  How do I know the last one?  Because he garrotes a guy so hard that it cuts off the lower part of his jaw!  Is that even possible?  This film is full of plot holes and just feels lazy.  More importantly, it delves into the whole 'Torture Porn' thing and just generally made me feel uncomfortable.  I can deal with shitty movies- and I do- but I still don't like that shit.  Obviously, you may disagree. 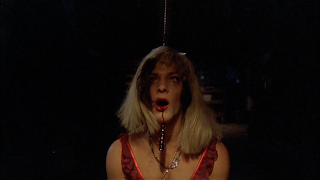 Next up, I take a look at one of the two Direct-to-DVD sequels to Wrong Turn.  Those cannibals sure do keep busy!  Stay tuned...