Aliens, robots and Deep Space Nine actors, oh my!  Charles Band had his hand in many cinematic honey pots back in the '80s and '90s.  He helped produce action films, sci-fi films and horror films.  Obviously, this is a sci-fi film, but it does have a bit of action in it and some monsters, giving it a bit of a horror element.  The real scary part: our hero's outfit!  More on that later though.  What is the film about?  It's about alien pit-fighting in the future and one man who wants to prove that humans can join in on the death-dealing.  A lofty goal, for sure.  If you like silly-looking sets, stilted acting and rubber monsters, you're in luck.  Make sure to keep an eye out for a number of sci-fi actors making appearances here too.  Will the film live up to its premise though?  Get your spear and net out because we're going into the... 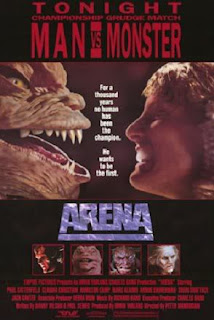 The movie begins with some narration talking about how aliens fight each other for sport in the Arena.  It also notes how there has never been a human champion in the last 1,000 years.  Make note of that fact for later.  We cut to, well, the Arena.  We're getting ready to see a robot-looking alien fight a cyborg, werewolf-thing.  Basically, it's like watching the Hubble fight Project Metalbeast.  It goes as well as you might think.  The point of this is to set-up our villain Rogor (played by Deep Space Nine actor Marc Alaimo) and his henchman Weezil (played by Deep Space Nine actor Armin Shimerman).  Yes, the conniving, weasel of a character is played by the same guy that played Quark.  Was DS-9 a case of type-casting or coincidence?  They cheat to allow their guy to win, while the movie focuses on a bar run by an alien man named Shorty (played by Deep Space Nine actor Hamilton Camp) and waited on by our hero Steve Armstrong (Paul Satterfield who wasn't on Deep Space Nine).  In addition to that, we have the lead promoter for the robot guy (played by Babylon 5 actor Claudia Christian).  All these genre actors are distracting me from the plot!  Basically, our hero beats up an alien in a fight and gets fired, but finds new hope... 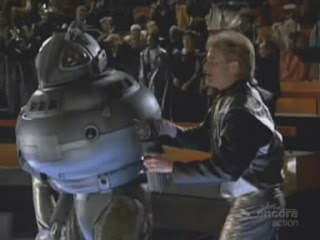 He's taken to Shorty's house and the guy tries to convince him to become a fighter.  Yes, because he did it one time in a different location, he's set!  Our hero resists the offer, however, and merely asks for enough money to get back to Earth.  He is taken down to the basement area of the station where he's attacked by some random guys.  As it turns out, they work for Claudia and were there to test him.  He still turns down the offer, upsetting the woman.  Him and Shorty go out gambling and manage to win some money, although the place is also occupied by Weezil.  The place is raided by the cops and our heroes get taken by Weezil to see Rogor.  He forces our hero to raise the money that Shorty got via cheating.  How does he do it?  He signs up to fight for Claudia.  Wow, that plot thread resolved itself in a very roundabout way!  The duo leave Rogor's office, which is later graced by the presence of a guy named Skull, named after his cybernetic enhancements on the titular object.  He offers to help Rogor cheat using a device, but the man turns it down.  This is a Checkov's Gun, so keep an eye out for this later.  Our hero battles his first enemy, which turns out to be a giant, worm-looking alien...that barely moves.  Hello, budget limitations! 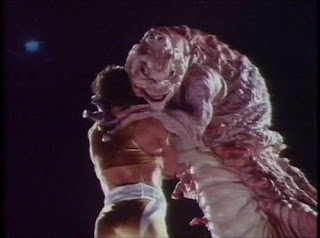 Our hero manages to win the fight, in spite of wearing an outfit that looks like a yellow version of Milla Jovovich's from The Fifth Element.  He succeeds when he stops standing still and getting punched- shocker!  This leads to a montage of his victories and headlines about them.  He's touted as the first human champion in 50 years.  Wait- 50?!?  Yes, the last guy was 50 years ago, but he never became the actual champion, allowing this film a silly loophole.  All of this leads up to the big fight between our hero and the champion- the cyborg-werewolf from earlier.  To gain an edge, Rogor uses a woman who's had our hero's eye for the last 2 Acts to seduce him and drug him.  He survives the poisoning, however, and is able to fight, albeit just barely.  This leads him to use Plan B- the device of Skull's from earlier.  Basically, the fights use a device to lower the strength of aliens to make the fights fair.  Skull's device turns that off.  This leads to a beat-down, until Weezil takes out the man Space Mutiny-style.  Our hero manages to win the fight, leading to him achieving happiness.  The End. 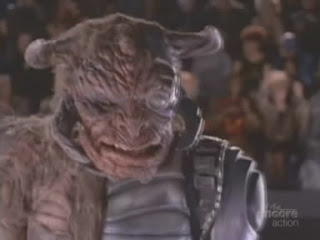 Let's kick some alien ass!  The plot of this movie is simple and effective.  Is it ground-breaking?  No.  It's aliens fighting, aliens scheming and one human schmuck stuck in the middle.  The lead actor cannot carry the film, leaving the heavy-lifting to the Supporting Cast.  To the film's credit, they manage to do this pretty well.  The film will never be mistaken for Star Wars or any of the series' that the actors went on to do.  However, it's a fun Direct-to-Video release.  There are plenty of laughs to be had here too.  My favorite thing to do was to watch Shorty and how the effect of him having four arms was done.  Most of the time, they were just prop arms attached to a harness, swaying as he walked.  When they had to be real, he was behind counters or next to tables.  Yeah, you're fooling nobody!  All of the other effects are actually pretty good.  To be fair, I am and have always been a fan of practical effects/suits, so I'm a bit biased.  If you like pulp films, check this one out.  It's silly, but fun. 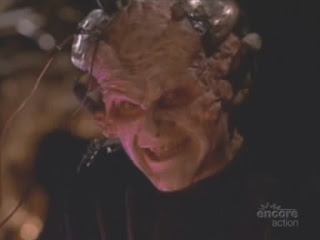 Up next, a film by Charles Band that is actually 8 films by a bunch of other people.  Oh yeah, 'Satan' shows up to torture a nerd too.  Stay tuned...