Al Adamson- master of the awkward film-splicing!  This genre director is famous for a lot of really shitty movies & this is one of them.  The movie is a mix of space footage, vampire footage and a caveman movie from The Philippines.  No, really.  As far as I can figure, Adamson mixed the Foreign film with a bit of exposition scenes, but couldn't sell it.  Like a lot of his other films then, he added a new opening explaining that it all related to a vampire plague on Earth, spruced up the title and here we are.  Like most Al Adamson films, this one features John Carradine.  Was your freaking theater company worth all this crap, John?!?  The film's plot is a mess.  In fact, I barely feel like I can call it a plot.  It's like emptying your refrigerator out into a bowl, mixing it and saying that it's dinner.  This is one of those train wrecks that you kind of have to see.  Be prepared for the shocking sight of the... 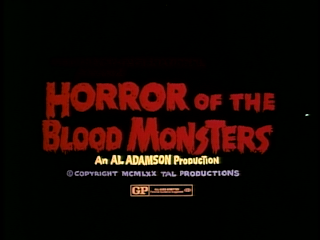 In an introductory scene, we are explained to that a vampire outbreak has occurred on the Earth.  All of this is done via narration, mind you.  As if I didn't know that this film was heavily-edited, the lack of dialog tells me right away!  A bunch of vampires attack people, but I don't know who any of them are.  The narrator explains that the source of the plague came from outer space, leading to the older footage... 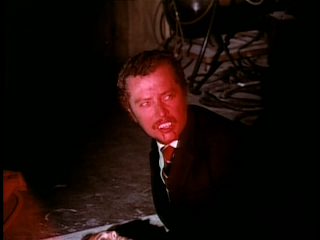 We get a long sequence of people preparing to go into space.  This long, tedious scene is brightened up by a bit of random and nonsensical editing.  We cut from shots of the crew in Mission Control from behind to close-up shots of different actors standing in front of a black drape.  In most of the shots, the drape is obvious and the shots linger!  The crew eventually launch their ship via stock footage, but Control loses contact with them due to some drawn-in effect.  Thankfully, the ship has a set of cameras inside it that show them what they did.  That's...silly.  In addition, they also have cameras outside the ship that filmed the event too.  Why would you have that?  Anyhow, they reach a planet. Unfortunately, that planet is overrun with Chroma-Spectral Radiation.  Yes, they just made that up.  Basically, the planet changes color at whim, at least adding something interesting to this mess.  If you're wondering why this plot point exists, you'll find out in time.  While our heroes wander around the plot- save for Carradine, who stays on the ship- we see a tribe of cavemen running around.  Oddly, they never meet up with or interact with our heroes.  It's like they were in two different countries at two different times or something!  They actually do interesting stuff like fight humanoid lobsters...with shells on their backs.  Which guy in the Costume Department got drunk this time?!? 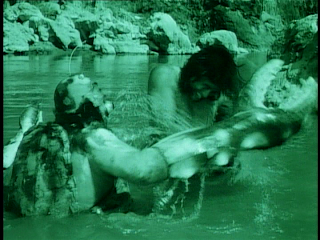 These guy continue to actually do stuff that's interesting, even if they're awkwardly-dubbed.  Our actual heroes need some generic science goo to power their ship again & the cave-woman that they rescued knows about such a thing.  Her fellow cavemen go into, well, a cave, and fight some bat creatures.  They take the stuff and leave.  Following that, our heroes walk in separately...and just leave ten seconds later.  That was...anti-climactic. 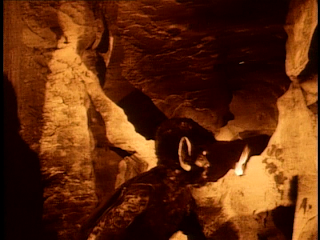 Our heroes wander around some more and pretend like they actually have some bearing on this plot-souffle.  At one point, one of them wanders around the Arizona Desert...I mean, the mysterious planet, but stops when he sees a wondrous sight- dinosaurs!  It's amazing how he sees them, considering that they're from One-Million B.C.- a film released thirty-years earlier!  The two don't interact and he just kind of leaves.  Odd. 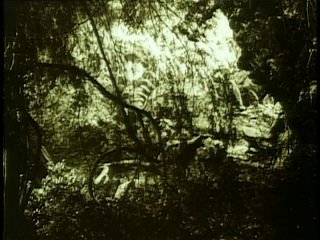 I would be remiss if I didn't mention a random scene in which the two people in Mission Control go off and have sex.  Yes, there is only two of them.  Instead of normal sex, they lay in bed while lights flash.  If you wanted to see the precursor to 'helmets on the head' sex from Demolition Man, this is it.  Does it serve any purpose?  No. 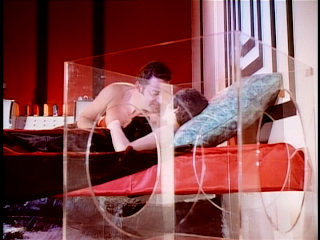 Speaking of no purpose, we get more dinosaurs.  Al Adamson decided to take footage from two different dinosaur films here!  Why?  Because he could, I guess. 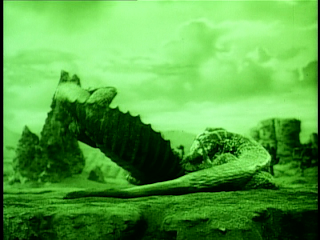 The film has to wrap up, but it also needs to randomly mess with the plot.  First, we get the lead guy on the planet get randomly-killed by one of the fill-in cavemen.  That sure accomplished a lot.  Next we get a bit where the other guy professes his love for the cave-woman, but says he has to leave anyways.  As he goes to do so, he dies from radiation poisoning.  Um, okay.  The others make it on board as Carradine explains the reason why.  Don't worry, this plot point has no bearing on the remaining time here. 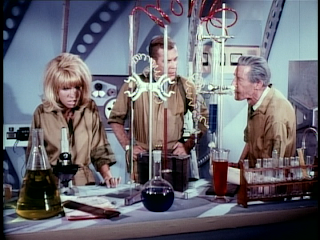 To wrap up the cavemen's plot, they have a big battle right out of their own movie.  There's not even a hint of anything to tie this to the 'astronauts' story- it just happens.  It's actually decent too, even if it's all colored yellow or green.  Our heroes prepare to leave in possibly the most blatant model shot ever and...that's it.  No wrap up for the vampires.   Nothing.  The End. 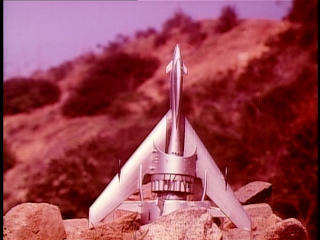 Ano the hell is going sa dito!  The plot of this movie is, like I said, not really a plot.  It's a pretense so flimsy that it would probably be used as a levy in New Orleans!  There's no coherency, except for when it is awkwardly-crammed in.  For example, we see cavemen running around and, suddenly, we see different ones chasing the woman.  She's not in the Filipino footage, but they do try to edit around that.  Want to know why the planet is constantly changing color?  Because Tanga- the film from The Philippines- was shot in black-and-white!  An entire plot point was just made up to allow Adamson to use this footage, as well as the stuff from One-Million B.C. and Unknown Island.  You can't make this shit up!  I'd love to see someone try to use this idea in the modern day.  Oh right- they already did that in Shakedown (2002).  Check that movie out, by the way, as it is hysterical!  As far as this film goes, it is funny at times.  It's funny to watch Carradine continue to act in this movie, despite not leaving the ship.  It's funny to watch the mixing of footage from different decades and countries.  If someone were to go into this film without all this knowledge, however, they might think that it's just a giant mess!  Well, it is.  It's worth a laugh for all you exploitation fans or fans of schlock.  Just don't expect any blood monsters...or coherency. 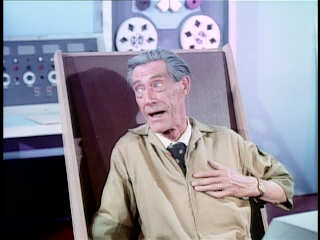 Next up, a film about spiiiiderrrrrsssss.  You're going to rip-off Willard again, aren't you?  Stay tuned...
Posted by Alec Pridgen at 11:31 PM