How is this supposed to sound scary?  I'm sorry- but what is going on here?  Have we used up all of the interesting monsters and or professions?  Hell, we had two movies about a killer Dentist!  This...this is just silly.  It gets better though.  The movie stars Lance Henriksen, since I guess they could scrape up $5 to pay for his bus fare.  I wouldn't be so harsh towards you, Lance if you didn't do the following films: Pirates of Treasure Island (The Asylum), Alone in the Dark II and Mimic III.  Incidentally, when you do two Sasquatch films in one year (Sasquatch Mountain and Abominable), this is a sign of things that should be changed!  Do you even want to know the plot of this movie?  I didn't think so.  Let's just get our thimbles on as we go to visit... 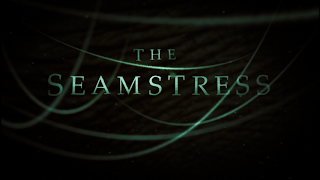 The film begins with some long, confusing narration.  We're off to a great start already, aren't we?  Next we get a middle-aged guy randomly being killed in the woods without next to now context.  This leads to a long section where a young woman is driving a car around and narrating her back-story.  Her father is a reporter who had a rocky relationship over the years.  He's become obsessed with looking into the story about a seamstress that was mysteriously killed years ago.  Yeah, this film is basically a goulash made out of various J-Horror and K-Horror tropes, with a little bit of cliche Slasher Film for spice.  She goes to talk to a man about the incident, but she's talked down by the angry guy.  I thought that he would be happy to get accused of murder!  She goes to talk to her friends about the incident and we see hints of a past relationship that caused some issues.  In addition, there is the fact that I don't give a shit.  They all agree to go to a nearby island that may be the center of the whole thing.  Boat trip! 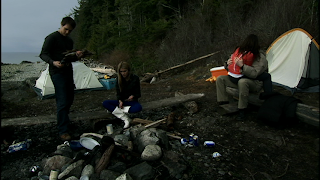 You'll thrill at the excitement of...people sitting around on a beach.  Nobody will be seated for the Pointless Banter Around the Camp Scene!  The only interesting thing is that one of the couples announces that they're now engaged and they proceed to run off into the woods to have sex.  Good luck with the investigation, people who aren't 'doing it!'  Our heroine wanders around for a bit and passes by one of the other guys as he's apparently 'doing it' to himself by a tree.  Thanks, movie.  He explains that he was doing it for 'pacing' as he has plans to make it with the film's third female.  Speaking of which, the couple interrupt their 'whoopie' when the guy 'has to go.'  As if to up the 'yuck factor,' he takes one of his fiancee's socks in lieu of, well, you figure it out.  Speaking of random and unnecessary, we get footage of Lance Henriksen as the nearby town's Sheriff.  He eventually goes to the guy we saw earlier and beats him up...off-camera.  Speaking of off-camera, the newly-engaged guy is found dead, naked and tied to a tree with barbed wire.  At what point did he take all of his clothes off again?  On the plus side, something happened...even if we didn't get to see it. 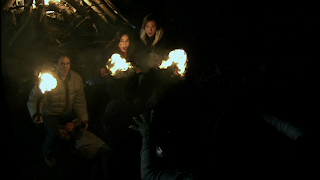 The killer in the woods continues as he takes out the girl who isn't engaged or the Final Girl.  She's tied up in a tree and falls into a fire, which subsequently explodes out.  Stop drinking gasoline- it doesn't make you cool to pay homage to Top Secret like that!  Back on the mainland, Lance threatens to torture the guy some more, since he told the girl about the island or something.  He doesn't actually torture him, however, deciding to take him to the island.  The ex-fiancee bites the dust now as she confronts the evil spirit attacking them and has her throat cut.  The jerky guy who has not merited a mention so far runs off, seemingly-safe from the attacks.  That just leads our two main characters, one of whom is seeing random visions of her father.  He warns of things too late to do any good and leaves obtuse clues for her- thanks.  Lance arrives on the island and forces our heroes to go back into the woods.  He explains the plot in some detail- finally!  A group of people- including himself- were responsible for the death of a teacher/seamstress on this island.  He brought the guy there since he was one of them as well and his sacrifice can end the curse.  We see a whole slew of people hanging from the trees as our heroine changes the curse by killing Henriksen.  She leaves with the film's sole survivor as the credits roll. 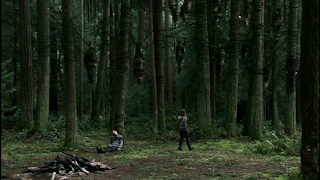 Ow- my thumb and my brain!  The plot of this movie is obtuse in all of the ways that it shouldn't be!  The film has a simple revenge scheme, but wraps it in so much crap and confusion that I can't really laugh at the tropes.  It's okay, movie- you can take the time to explain the plot.  On top of that, the pacing is just hideously-bad.  I've seen glaciers melt faster than this movie!  What's the point in dragging this shit out?!?  The movie is just an excuse to string together a series of weird killings and dream sequences/foreshadowing events.  Lance is barely in the movie and, quite frankly, he's better for it.  He's in a shit movie, but at least he barely wants to be in it.  The monster footage is alright, but not worth the time.  Just skip this movie and you'll save yourself 90 minutes of nothing.  It's like the first half of The Langoliers when it should have been stupid enough to laugh at.  You know, like the second half of The Langoliers. 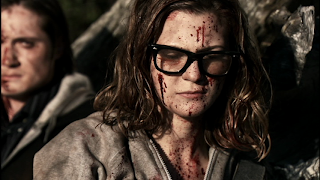 Next up, I actually review the film for Project Terrible.  It's going to be Troma-licious.  Stay tuned...