One more missed intersection and we're stopping for directions!  There's one more film in this series- unless you count what's mentioned in today's Mondo Trivia section- so let's not waste too much time.  The last film ended with some sequel-bait regarding another cannibal out there with a baby.  Well, they ignore the last part of that ending, but there are more cannibals.  What?  You were expecting giant robots or something?  This film mixes up the narrative a bit in a strange way.  Does it work?  Kind of, but not really.  The plot is a bit convoluted too, as we get a couple different groups that all have their own goals and agendas.  In those groups, there is even more splintering!  Basically, it's a movie where all the characters were put together via Mad Libs!  I'm not going to quit now though, so let's recalibrate the GPS before it sends us on another... 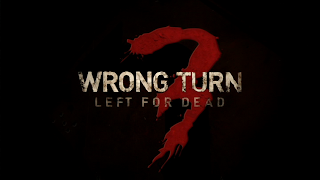 The film begins with a pair of couples out river rafting down the rapids.  They stop for a bit of sun.  One of the guys goes off with his lady, while the other couple stays behind for two good reasons: boobs.  While fondling his girlfriend, an arrow shoots through her boob and punctures the guy's hand.  He tries to flee, but dies.  The woman tries the same thing and gets an eye-full of arrow.  The other guy runs away, but trips like a woman from a 1960's film heroine and dies.  That just leaves the other girl and she...vanishes for the next thirty minutes of the movie.  Weird, right?  The narrative jumps to a prison where we learn that a transport is going down.  A young guard is sent with his black friend to transport a Neo-Nazi and an Hispanic Gang Leader.  It's like Oz meets Road Trip!  By the way, the movie's characters are so stock that they literally just steal Nicolas Cage's character from Con Air!  No, really.  As a bonus, the FBI has an agent going in undercover with the transport.  Guess how far this plot point goes- I dare you!  The group drives down a back road to avoid any attempts at a break-out and stops in for a chat with the local Sheriff and his hot Deputy.  They leave, but get attacked by the crazy cannibal.  Yes, they've escalated to attacking armed transports now! 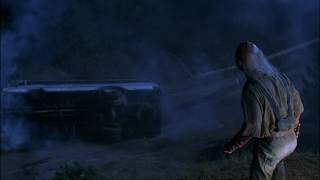 The group figures out that the attack was not part of the plan when the third, previously-unseen guard gets shot through the head.  Poor Bastard of Cinema, perhaps?  They fire at the cannibal, causing him to flee...for now.  He sets up some traps out in the woods, while another cannibal does the same.  There's actually a third cannibal out there too- the son of the main one- and he...runs up to attack the group and dies.  Thanks for playing- you don't get a copy of our home game!  The group says that they have to get a stash of money that was kept out in the woods.  Gee, it sure was nice of the Prison to bring them along the exact route they needed to go on...especially when the convicts didn't know about the detour!  The group bickers, since the Neo-Nazi guy and the Hispanic Gang Leader both want to be in charge.  They bring the two guards along for the trip, since the lead guy is familiar with the woods.  He has a crazy plan- make them wander around the woods until the cops can find them.  Never mind the killer cannibals out there- just make time for them to pick you off one-by-one.  Speaking of which, the undercover guy gets killed by a rope trap that sends a Scythe swinging, cutting his face off.  So much for that sub-plot, huh?  At some point, the Final Girl gets with the group...only to just get lead around like the others. 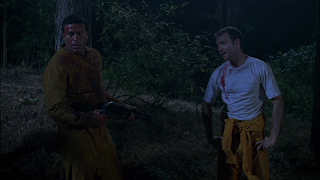 Things get really convoluted and complex here as the movie appears to be made by a guy with ADD.  We constantly jump back and forth between characters and locations.  At one point, we're watching the Sheriff look for the others, when we jump back to the 'Final Guard' and 'Final Girl' fleeing from the others.  The Neo-Nazi and the Gang Leader finally fight, but the former escapes with the money.  He gets killed by the lead cannibal via a molotov cocktail.  When did he learn to make those?  At one point, the Deputy is driving around and we later see her having already been captured and tortured.  There is a Deleted Scene showing her initial torture, but we still miss a lot here!  We get a showdown between the Gang Leader and the lead cannibal, which the latter wins.  Before that, however, the Gang Leader gave the girl up to the other cannibal, requiring 'Not Con Air' and 'Final Guard' to save her.  They do so, leading to the guy finally being killed.  It's just one last battle between the group and the other cannibal, which eventually ends in the guy getting a hook through the head.  The heroes let 'Not Con Air' go as payment as the movie ends. Of course, I would be remiss without mentioning the film's odd, post-credits Epilogue.  Final Guard goes back to the woods for the remaining cash.  This will fund his dreams that were so unimportant that they didn't make the review.  Unfortunately... 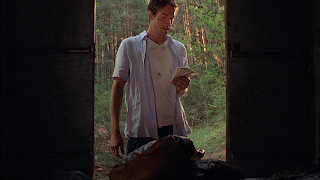 He is shot through the heart, but who's to blame?  It's Not Con Air, who has lost his faux American accent.  He repays people's kindness well, doesn't he?  Unfortunately... 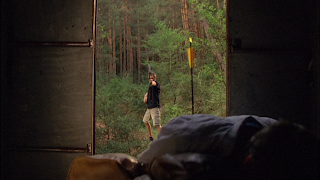 A fourth cannibal is out there and kills him off-screen.  So much for this being over, I guess.  The *real* End. 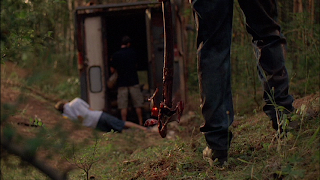 I'd rather be in Albuquerque!  The plot is a big mess, basically jumbling together a host of random ideas.  Was this film written by an actual writer or by a committee of children?  It's like when kids get together and all want their part to be in the story.  The result- no clear narrative flow or direction.  It's a bunch of people out in the woods who can't get along.  When they die, it has no real drama to it.  Maybe the cannibals can be interesting.  Nope- they never talk.  We get one little moment where the lead guy helps his son (maybe) out of a trap that he was setting.  That's not enough!  I have to care about someone for all this gore to matter!  Speaking of gore, the movie has a lot of it.  It's not Riki-Oh, but it is bloodier than most other films you might see.  Does it make the whole experience manageable?  Nope.  I can see blood in a lot of movies, so I don't care about this.  On an unrelated topic, the subtitle of the film makes no sense.  She wasn't left for dead- they didn't know where she was!  When a film can't even get that simple aspect right, what hope is there?  Feel free to skip this one unless you really wanted to see Cliches vs. Cannibals.  Now that's an Asylum film title! 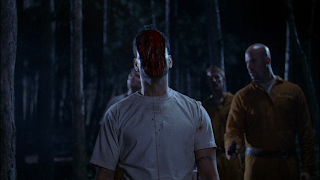 Next up, I cover the Direct-to-DVD sequel to a film that people either didn't see or love to death!  Given that it has none of the stars and no coherent plot, I'm sure that it will be great.  Stay tuned...