Welcome to the first disappointment of 2011!  After a slew of crazy, hit films like The Machine Girl, Tokyo Gore Police and the like, copycats have emerged.  It's a given, I suppose.  The worst thing, however, is the imitation imitator.  Basically, it's a movie that sounds like a copycat, but is something completely different.  If you want a good example, check out stuff like A Virgin Among The Living Dead (with ghosts, not zombies) or Zombi 5: Killing Birds (with one zombie).  Those are the worst!  I'm used to rip off movies like Xtro II, Robo-Vampire and Strike Commando.  What I hate, however, are films that just blatantly lie to you.  I can accept laziness, but not deceit!  Assault Girls is what you would get if you turned the basic plot of an anime show into a film, but cut most of the plot points, characters and events out.  It's a shell of a movie, basically.  It is pretty easy to spot where things are fleshed out and where other parts are just filler.  I really saw this movie and thought 'It's Japanese girl Gamer' (a fact that one of my friends can attest to, as I tried to sell him on it as such).  If/when you read this, be glad that you said 'no' to this movie.  Let's head out to the desert to check out... 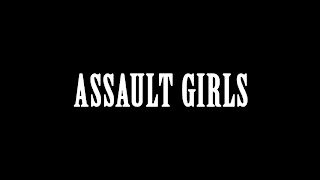 The film begins with nearly ten minutes of exposition, set against a slide show background.  We're not off to a good start.  To be fair to the original film, this feels like it may have been inserted for the U.S. release to explain everything.  If so, I'm sorry that they bogged down your movie with this.  If not, stop doing that!  Basically, Japan has become a desolate place where people find solace and escapism in Massively-Multiplayer-Online-Role-Playing-Games.  I fail to see how this is different than South Korea today, but I disgress.  Our hero is a guy wandering around a desert.  By the way, giant sand worm attack! 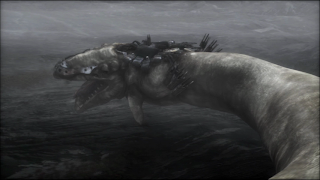 These monsters almost make up for the slow build here, but not really.  They look cool, but pretty obviously-CG.  Maybe I'm just spoiled.  We see a group of people arrive here though, all of whom are female.  So you're the titular characters, huh?  One of them is a gun-toting gal, another is a sniper and the third one is an emo-looking lady who can turn into a raven.  They all take out some worms and split up.  Good-bye excitement, hello boredom! 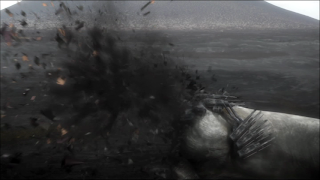 The movie really drags at this point, setting up little things about the characters.  For example, the guy should invest 'points' in transportation, while one of the women uses too many 'points' to take out monsters.  By the way, the 'Massively-Multiplayer' part of this game is false, since these are the only four players!  They even say that one of the women is paid to play.  Why?  It's just four people shooting random monsters in an otherwise-empty desert.  Oh yeah, they also thrown in pretentious title cards for each 'Chapter.'  Oh yeah, the film has Chapters. 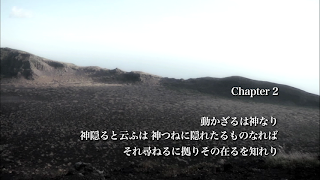 After a ton of filler and shots of every character walking past a monkey, the group finally meets up.  Why?  To take out the big, bad worm in the desert.  It's like the other ones, but it shoots missiles.  Right.  The guy is obstinate, however, and argues about how the points should be split.  This leads to a series of fights between him and one of the women.  He loses every time, but keeps getting back up.  Holy overkill, Batman! 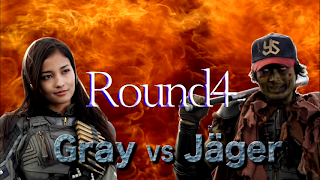 Finally, we get the big battle between our heroes and the giant worm.  It's actually pretty good, as it has them work together.  The bird lady shoots lightning (don't ask!), another one uses an Evangelion-style robot and the third one shoots it with her rifle.  The guy, meanwhile, has to wait until an opportunity presents itself.  He shoots the thing, which apparently has a 'kill-spot' on it.  That's odd, but alright.  The ladies turn on our hero, however, and explain that the first person to turn in the kill gets the points.  He takes them all down with his gun and the group all starts to fight again.  Wow, that was 70 minutes well spent.  The End. 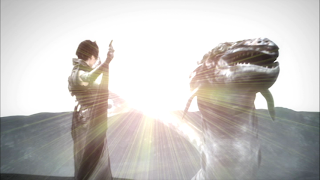 この映画は吸います!  What a freaking letdown!  The movie promises to be an hilarious mix of action, Japanese ladies and giant monsters.  What is it really?  A movie with two big action scenes and nothing in-between.  No humor.  No excitement.  No character development.  What is the point?!?  The women are mostly cute, but I can see lots of movies for stuff like that.  The monster effects are fun and the action (that you get) is also good.  It's just a shame that they are in a piece of shit movie like that.  The only reason that this movie got released was because they felt that they could trick people into thinking that it was something that it was not.  I don't like being fooled.  Do you?  This is not a complete waste of time, but it is a major one.  I really wanted to like this, but I can't. 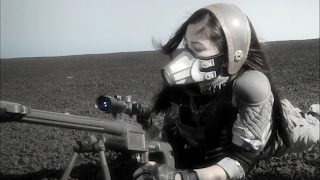 Next up, a cult classic horror film mixes a Serial Killer Film with an Asian Horror Film.  Does it live up to the hype?  Stay tuned...

Email ThisBlogThis!Share to TwitterShare to FacebookShare to Pinterest
Labels: Japan