Weird Killers 2: Kiss of the Tarantula

What's creepy, crawly and oh so hairy?  A tarantula, of course.  If you like these famous spiders, then you'll have one reason to like this movie.  Will you have others though?  This movie shares company with The Killer Snakes as films that have managed to rip-off Willard.  Speaking of which, I wrote my original review of Snakes in August 2009.  In it, I commented on the lack of a Region-1 DVD for Willard.  Guess what?  There still isn't a damn DVD!  Fix it!  Oh right- this movie.  A girl loves her spiders and find a reason to take revenge on people.  There's a little more to it than that, but not much.  Get out your lip sheen as we take the... 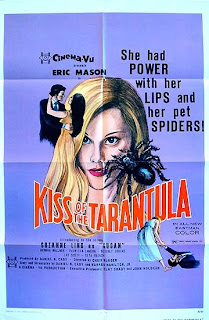 The movie begins with a woman wandering around in a field.  This leads us back to the past as we find out the woman- as a young girl- has a traumatic childhood.  She loves spiders, but has a family that does not feel the same way about her.  When her 'uncle' spends some alone time with her mother, this finally pushes the kid over the edge.  She puts one of her tarantulas in the room and it crawls all over the lady.  It bites her, I guess, since the movie doesn't shown any of that.  Since we have real spiders and real actors, this basically entails a spider standing on someone and them instantly dying of shock!  Hey, it worked for the frogs in Frogs.  We jump ahead to the present and find that our heroine is pretty happy.  She continues to live with her dad, who, by the way, works in a mortuary.  That's not so weird, except for the fact that they also live there!  Yes, they live in a Mortuary.  Ew.  In addition to that, the girl has a collection of friends- spiders.  This won't end well, will it? 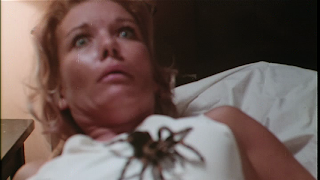 Not surprisingly, something bad happens.  A bunch of guys decide to leave a party and go into our heroine's basement.  They discover her collection and decide to mess around with it.  By 'mess around with it,' I mean 'they stomp on a couple of them.'  I'm not clear why they do that, but whatever.  They're generic bullies aka plot points, so let's go with it.  Our heroine is comforted by her uncle, but she still has plans of her own.  The bullies go on a date with their ladies later and it's time for killing!  Our heroine sneaks up to their car in the dark and places a bunch of spiders in it.  Yes, they fail to notice this.  When the spiders make their move- after about five minutes of wandering- all of them die.  Yet again, they just kind of make funny faces and die of...something.  One guy manages to close the window on his neck in the process too!  That's just silly.  The police look into the murder, but don't find a lot of clues.  It's about this time that the movie put me to sleep- I'm not kidding- so let's see what else I remember. 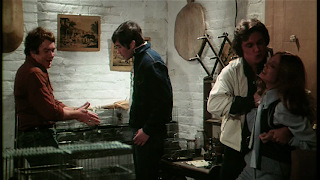 Seriously, this movie is just...Ambien, apparently.  The police investigate the incident and one of them gets too close to the truth.  Time for a spider kill!  Some odd stuff happens involving the Uncle too, as he finds out that one of the girls in the attack actually survived the...um, walking on her.  We get a random scene where she freaks out when she sees a common spider.  Was that to explain to us that spiders attacked her?  If so, we saw that scene!  She confronts him at the house/Mortuary and he...chases her into the woods.  In the dark of night, he catches her and chokes her to death.  I can't say that I saw that plot point coming.  The police continue to investigate the crime, but this plot point goes nowhere.  Ultimately, our heroine uses a toxin from one of her tarantulas on her uncle and pushes him down the stairs.  This paralyzes him enough for her to put him up in a rig.  She pulls out the corpse of the recently-dead girl, places him in the coffin and places her back on top of him.  The father sees nothing and she gets away with it.  As the text in front of her face says... 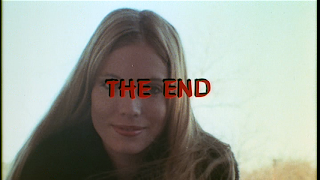 What has eight legs and sucks up 90 minutes of your life?  This movie!  The plot is simple enough and works, I guess.  Nothing really surprising happens, save for the uncle killing that girl.  Even that is kind of set up by him being sleazy early on.  Even so, murder is a step up from adultery- at least in my book.  The real hook of the movie is the use of the spiders.  This...is kind of disappointing.  As I said before, the use of real spiders and real actors kind of neuters this film's ability to be interesting or shocking.  Mind you, Arachnophobia managed to do this right.  The difference- that's a good movie.  This movie is just a bad Willard rip-off that has a pace so leisurely that it almost appears to be going backwards!  I wanted to love this movie, but it was just a big, hairy mess. 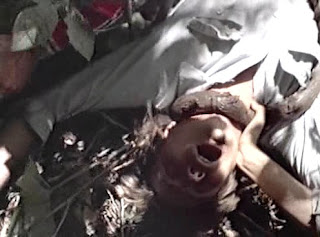 Up next, Blockbuster Trash brings you a film that involves Vikings, Jesus and aliens.  I'm not kidding either.  Stay tuned...
Posted by Alec Pridgen at 11:05 PM