A cheap marketing gimmick is only notable if it actually makes you want to buy something.  Leave it to the folks over at Wizard Video to screw up the simplest of gimmicks.  The company owned the video rights to a number of zombie films, so they decided to sell a release based on just them.  Is it cheap?  Yes.  Is this attempt effective?  No.  There's a key problem with the film as a whole that I will get to shortly.  On the plus side, the film does feature a whole slew of pretty famous zombie films.  Of course, they couldn't leave Oasis of the Dead and Zombie Lake out of this picture!  Even as a head-cold begins to slowly kick my ass, I will still tackle this obscure, VHS release- dammit.  Get out your organ checkbooks as we give to the... 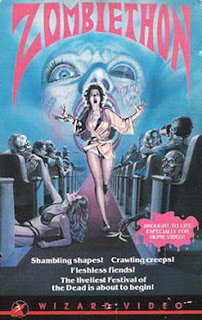 The film begins with a young woman walking around her garden.  That's supposed to be a Secret, you fool!  A zombie slowly ambles after her as a voice inside her head- the same one from The Octagon?- warns her of the danger and tells her to 'flee.'  That's about as helpful as 'Move, move, move!' by the fourth time, lady...voice...thing!  She runs into a movie theater called the El Rey- Mucha Lucha!- but finds a bunch of zombies, or at least their voices.  Yeah, the producers of the new footage are cheap!  This leads into clips from Zombie (aka Zombie 2 aka Zombie Flesh Eaters, etc).  By clips, of course, I mean every zombie scene in the film.  All of them!  They even show you the ending!  This means that there is zero point to now track down the movie and buy it.  Good call, you idiots! 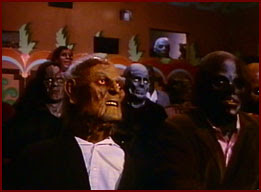 Next we see a woman on the beach.  She takes off her top, apparently in an attempt to redeem this thing.  A zombie slowly comes towards her.  This zombie, by the way, appears to the be giant, zombie version of Decapitron.  Odd.  She flees into a movie theater- the same one- and this leads into clips from Zombie Lake.  Of course, by 'clips' I mean...oh, you already know!

The next scene involves a woman slowly trying to escape from a zombie.  She gets to a locked door and proceeds to spend the next minute straight prying at it.  It's locked- move on!  The movie abandons its own framing device now, ending with the zombie approaching her as we get to see Oasis of the Dead.  I haven't seen that movie, but I've heard that it sucks.  Thanks for saving me from watching that Franco film, I guess. 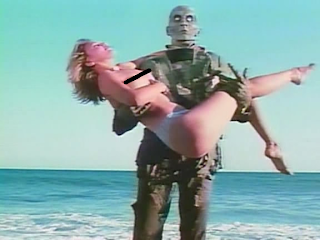 They attempt a sort-of plot here as a woman wanders around the same beach and poses like she's in a perfume commercial.  A zombie wanders in her direction and eventually grabs her.  She doesn't seem to mind, apparently, and lets him take her to the El Rey for more zombie footage.  Is there any pointing in continuing here?  You get the drift. 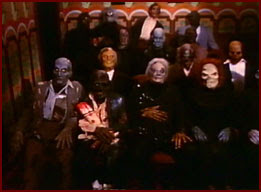 This...is not a movie.  I don't know why they tried to pretend otherwise.  The plot is...a bunch of random scenes to set up clips from zombie films owned by Wizard Video at the time.  Again- they ruin this in a couple of ways.  First- the framing scenes appear to be out of real films- albeit bad ones- but this is not a movie.  You couldn't have a less deceptive one like some game show host showing them or something.  This format has been done right a number of times- see every Clip Show ever- but they fail at this.  Second- they show every interesting scene in the films.  What was the point of this release again?  Was it to make me buy the movies?  If so, I wouldn't.  You showed me everything I would possibly care to see!  Is context that important?  No.  While an interesting premise, this thing just fails in execution.  In hindsight, the movies have since been released by numerous people.  If this was a collection of super-rare films, it might have some merit.  When I can buy 6 different versions of Zombie on DVD, it does not.  Ironically, this actual release is out-of-print in most places you look!  As a whole though, it is worth a look to you younger readers who didn't live through this marketing time. Up next, one of the more obscure fake sequels arrives in the form of Troll 3 aka Contamination .7.  I hope you like vines.  Stay tuned...
Posted by Alec Pridgen at 3:01 PM