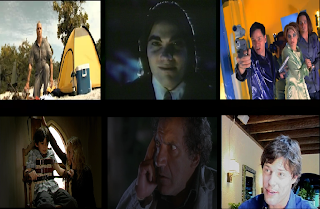 Never has the word 'Terrible' been used so appropriately!  Riddle me this, Batman- you've got $5 and a hand-held camera.  What do you do?  If you answered 'become an amateur journalist to uncover the secret wrongs done by those in power,' you'd be a good person.  If you answered, 'make the 6,000,000th direct-to-DVD zombie flick to hit the market,' you'd be a terrible person.  Since 'terrible' is the word of the day, we're going to have to 'enjoy' another zombie flick.  I love zombie films...when done either in a stupid, but funny way or in a good way.  This is neither.  If you want to know what the difference between 'so bad it's good' and 'bad,' this is a great test subject.  The film is the brainchild of Joshua D. Smith, the man behind Zombie Campout and...um, Zombie Campout.  Yeah, he has one film on his Resume.  However, to compensate, he's credited as the Writer, Director, Producer, Editor, Stunt Driver (Boat), Gaffer, Zombie Extra, Production Manager, Special Effects Supervisor and Casting Director!  It's a wonder that he didn't just shoot the film with a cast consisting of himself in six different wigs!  The film is about...aw, who cares?  Let's just get out our raw meat so we can *sadly* attend the... 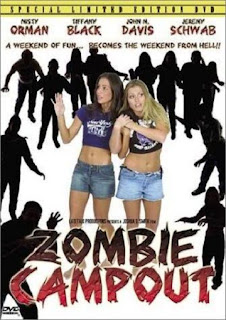 The film begins with a group of four people at a campout.  Well, we're jumping right into the mix of things, huh?  Good- I want this to be over with quick.  A pair split off and one of them is killed when...the credits begin.  Oh, so this is one of those 'how did we get here' moments, right?  No.  It's just thrown in to screw with you.  The film actually begins with a guy getting ready to go out on a campout.  He goes through a number of outfits and reads a magazine called 'Trucks and Boobs' which features a blurb about...Zombie Campout?  You created a fake magazine (I hope) to put a blurb about your film's title into the film itself because...um, humor?  The set-up is simple: a guy and his girlfriend take her single friend and his single friend out for some fun.  On the way, they pass a woman driving around topless and...oggle her for about five minutes.  Who needs plot when you have pointless, unfunny non sequitur moments?   They run across some more women and just kind of talk to them.  They run into a Sheriff who tells them about a meteor shower coming that night.  Instead of watching, they lay around and make-out.  The meteors strike down in California, so it naturally causes zombies to rise from their graves in Texas, where the movie is set. 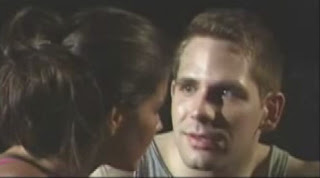 At this point, the movie alternates between boring scenes of the principal characters talking and zombies randomly-killing people.  Speaking of random, the movie is never clear what kind of tone to go for.  In one scene, zombies toss a woman's body parts into frame in a comedic fashion.  In another scene, they grab a four-year old kid and eat her!  Comedy or drama- pick one!  Our heroes do a whole lot of nothing, constantly managing to stay just adjacent to the plot and never interfering.  Be proactive, people!  Eventually, they realize that zombies are loose, but it's too late.  No, they don't all die.  I just stopped caring.  Forty-minutes- that's an impressive run, movie.  The End (for me). 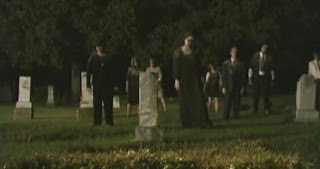 Eat me, movie!  The plot of this movie is...a joke.  Unfortunately, nobody is laughing!  It's all about a bunch of people who go through over half of the runtime without realizing that zombies are loose.  It's like Shaun of the Dead- if it was directed by the zombies in it!  This movie is just an insult to everyone who dares to actually watch it.  On the plus side, it's probably only insulted a handful of people in the last nine years.  In addition, it's cast has gone on to be in a whole lot of nothing, while Joshua D. Smith's most recent credit is doing Still Photography and working the Sound Board for a film called Bikini Detectives.  No, really.  Look it up if you doubt me!  The movie tries to cover it's lack of humor, bad writing and lackadaisical directing with a lot of fake blood.  It doesn't work.  The gore is plentiful, but it really makes it look like the zombies are just spilling Fruit Punch all over people.  When your film's list of Goofs is longer than your list of Cast, you've made a bad movie.  When your Director/Producer/Writer/Editor's name appears in the credits 24 times, you've made a bad movie.  When your zombie film is not scary and nobody is laughing, you've made a bad movie.  This is a Terrible movie- with a capital 'T.'  Thanks, Carl- I'll be sure to send some especially horrendous stuff to you in Round Two of Project Terrible. 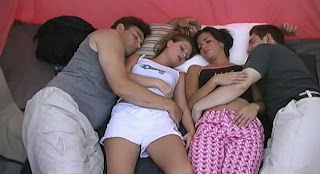 Next up, more Project Terrible as Carl brings me a horror anthology film.  It features cowboys, government agents and the worst framing device since Cat's Eye.  Stay tuned...