Well, I'm glad that you think that the movie is clever.  Smokin' Aces was a minor hit by Director Joe Carnahan a few years ago.  With such a fertile video/streaming market, a sequel was only natural.  Of course, Carnahan and company have to mix things up, so we get a prequel.  Joe didn't have much to do with this movie, as he was too busy making an awesome movie called The A-Team.  Speaking of that movie, the original Aces was famous for its abundance of celebrities, despite the low-budget nature of the film.  What does this one bring us?  If you guessed Tom Berenger and Vinnie Jones, then you would be right!  Yeah, that's a little sad.  Of course, maybe I'm being too harsh.  This film could have more going for it than I think.  Rather than talk about it, let's get right to it.  Incidentally, this review will not be free of SPOILERS, so keep that in mind.  I've got my best dress and my baretta, so we are ready to attend... 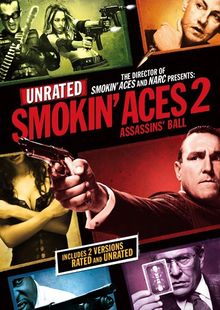 The film begins In Media Rez with a man walking out of a burning building in that awkward camera work done on that Fear show that used to be on MTV.  We jump back about a week to see how we got there.  You're already beginning with a pretentious film cliche, so we're not off to a good start!  We find out that a hit has been put out on a mid-level clerk in the FBI.  Why?  We'll find out in the end...and you'll be disappointed.  In some bits of flashy editing, we manage to meet the villains of our film.  One of them is a crazy blond woman who is part of a clan of crazy killers.  As one of the two, returning cast members, you immediately know that her brother won't die here.  Good-bye, drama.  Next is the clinical hitman for the mob played by Vinnie Jones, who does a little brain surgery on a client.  There's the busty nun who kills a priest because...well, they wanted a woman dressed as a nun here.  Whatever floats your boat, movie.  Last is a man who is a master-of-disguise and the other returning cast member.  Gee, I'm sure that he'll die in the final battle too.  The FBI agent (Berenger) is taken to a hidden location to wait out the contract's expiration.  Yes, this hit contract has an expiration date...for some reason. 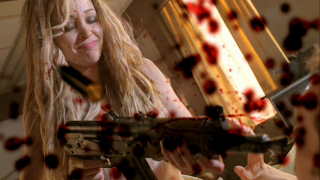 The movie bides it time for a bit, setting up all of the characters in their own little ways.  A lot of this is just filler, but some of it does prove important.  All of the killers get into place, as Jones and the slutty nun lady enter the bar set above the bunker containing the target.  I get the whole 'hiding in plain sight' thing, but allowing people to walk freely above your location is not a smart thing.  The master-of-disguise switches places with one of the agents, allowing them to bring back the old actor and actually use him very little.  I'm sure that he loved that.  The crazy family splits up, with the woman going down into the sewers while one of the brothers snipes the outside agents.  For their big move, they take a couple of circus clowns, wrap them in dynamite and fire them out of a cannon-which they stole from the same circus- causing explosions inside.  Before that happens, however, a shoot-out occurs between the agents and the killers inside.  Naturally, the disruption is not taken well.  Amidst the chaos and action, the slutty nun lady is killed, ending her romance sub-plot with Jones.  Remember how I said that a lot of this was filler?  With danger above and chaos below, things don't look good for the star of Sniper! 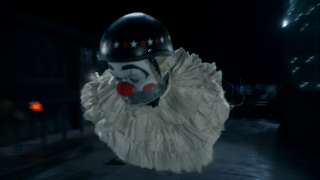 Action, action, action.  The movie certainly does not skimp on that.  However, their cast of mostly-disposable characters doesn't really provide any underlying drama to this.  A bunch of good guys die- mostly the filler agents- and a few bad guys die- including Jones.  The master of disguise fakes being injured in order for one of the men to get him past the sealed door to the bunker.  The man who lets him in is so adamant about this, in fact, that he shoots the man stopping him...only to be shot by the killer.  You're in contention for Dumb-ass of the Year, especially since you got another guy killed too.  After messing with the power, the crazy girl from the family busts in through a wall...and gets shot in the head.  Thanks for coming.  The two remaining crazies- since the fat brother got killed by Jones- start shooting the bunker door.  Berenger gives a speech about how he has to give his life closure and take out the guys with a dead man switch rigged to his wheelchair.  An explosion ensues, leading to the beginning...which is also The End. 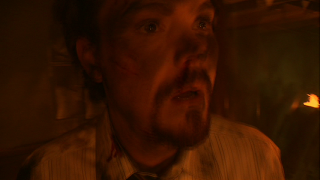 Oops- I forgot the awkward exposition wrap-up and finale.  Ernie Hudson shows up to explain what really happened.  The guy who hired the hit was...Berenger.  All of of the bullshit earlier about Neo-Nazi groups and such was a lie to disguise the truth.  He had been working as a double-agent for years and was close to having his cover blown.  He hired the people as a way to create his 'death' and escape.  We get the ending from The Usual Suspects as Berenger walks into his car to leave...but that is disrupted by our hero popping around the corner and killing him.  That wrapped in a pointless and silly way.  The End. 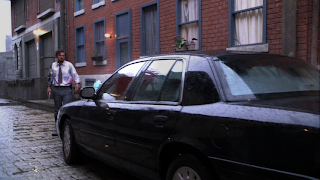 Holy pointless-convolution, Batman!  The plot of this movie is wrapped up like a sushi roll.  The problem is that the more you unwrap it, you realize that it's not filled with fish, but with ridiculous bullshit.  The movie expects you to buy into a whole lot just because they say so.  Well, guess what- No.  I don't buy that the redneck family could do all the stuff that they do.  I don't buy that Vinnie Jones can walk into the bar and nobody thinks anything.  When a guy who looks like a soccer hooligan walks into a Jazz Club, it gets noticed!  I don't buy that the master-of-disguise can make these masks and copy voice patterns so easily.  Furthermore, how did he get a mask made out of the agent's face when didn't get the assignment until two days ago?  I don't buy that nobody would be able to figure out this ridiculous ruse by Berenger.  Aside from all that though, the movie has a lot of action and some attempts at humor.  Some of the jokes are obvious- like the clown bit- but others are just obtuse.  For example, what's with the green screen effects during the bit with the rednecks in their van (see below).  They start changing the background- which they stole from Airplane and Naked Gun- but never address it.  Is that a riff?  The bottom line- this movie thinks that it is clever, but it's really just in love with itself. 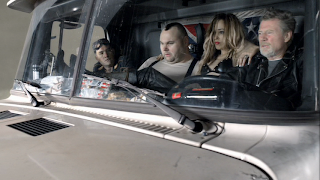 Up next, we get an unrelated sequel to a thriller about a killer in a truck.  Well, the last movie starred Paul Walker, so I'm sure that they can top it...right?  Stay tuned...