Why couldn't you have stopped while you were very far behind?  Sleepaway Camp was a mild hit in 1983, proving to be more famous for its twist ending than anything else.  Welcome to your future, The Sixth Sense!  Sleepaway Camp 2 was another decent hit, although some big plot changes occurred and the faces involved changed.  Sleepaway Camp 3 stretched the premise a bit too far and tried to insist that it was important.  More importantly- it's not really funny.  Next came Sleepaway Camp 4.  Wondering why you can't find it on Netflix and/or streaming anywhere?  Well, they never finished making it.  If you get the series collection on DVD- which doesn't include today's film, as it was made later- you get to see the remnants of the film on the Special Features Disc.  Even so, today's film is unofficially-known as Sleepaway Camp V.  Yes, by all means, acknowledge the film that was neither completed nor released in any way!  That brings us to 2008 where the original director returned to reclaim his series.  The result- a movie barely-released on DVD, let alone in theaters.  Good job.  The film supposedly continues the story, all the while ignoring 2 and 3.  Angry much?  Will this film be the return to form or just prove why you shouldn't resurrect a film series after 25 years?  Pack your bags and your assault rifles for our... 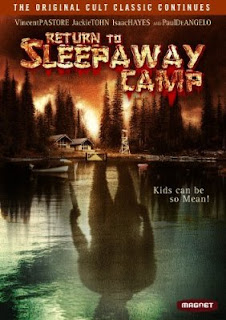 The film begins by immediately-annoying the audience.  A couple of pre-teens are lighting farts, whereupon a fat kid joins them to pick on them.  However, he always thinks that others are picking on him.  As it turns out, a lot of them are...while he also insults and incites them.  What happened to 'bullies pick on kid, kid gets revenge?'  Why was that not in this story?  Instead, I like nobody.  The new Camp is run by 'Big Pussy' and has a staff that includes Isaac Hayes as The Chef.  Hey movie- not funny!  The kids are so rowdy that they won't even listen to a cop with a voice box tell them not to smoke.  Those bastards!  We see more antagonism both too and from Alan, the fat kid.  He makes a scene and then gets taken to the kitchen, where he argues with the Chef's Assistant.  It ends with the kid throwing a knife at the guy and being taken away.  You couldn't be a bigger Red Herring if you lived in the Ocean!  Speaking of which, the guy is killed later as a mysterious assailant tips him into the container full of fry oil.  Gee, I'm sure it's totally that kid we saw earlier... 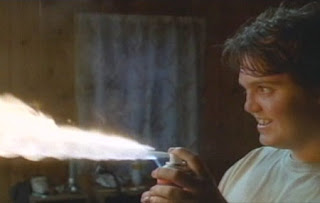 The movie goes through a series of scenes that are very repetitious.  Basically, Alan picks a fight with people who did nothing to him and then gets picked on by the other kids.  In fact, a couple of the Counselors get in on the act.  Most of these bits are just stupid and tedious.  One of the other sub-plots involves Alan having the hots for a blond girl who has to be at least 22.  She's still hot- don't get me wrong- but she's not the right age.  She eventually agrees to meet him at his lakeside hide-out, but gets freaked out when all of the frogs end up being skinned.  As it turns out, this was the result of a bully's action.  Hey, remember the bullies from Evilspeak that sacrificed Clint's puppy to Satan?  Well, they have rivals!  Oh yeah, the fat kid never changes his shirt either, even after he's doused in eggs, tossed in the lake and shot with paintballs.  I'd make a joke about Eugene from the WWE, but most of you would probably not get it.  Throughout this time, people are sporadically-killed.  This film manages to rip-off moments from it's own series too.  Case in point: the stoner guy is burned alive.  Get it?!?  It's like a joint! 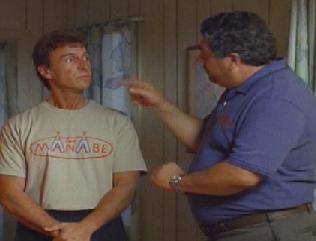 Apparently they used up the Special Effects budget by this point because we just get more Allen being a jerk and people being bigger jerks to him.  In an odd little scene, the cop from earlier- who never really leaves- goes to visit the brother of Angela.  This will be important later, so don't forget it.  Eventually, the movie goes into overdrive and tries to cover for the boring parts.  One guy gets killed via a stake driven through a hole in the Cabin floor, but only after it misses the first time and he sticks his face in front of it 50 more times.  The fat, black girl gets killed when the assailant jumps on the top bunk, driving the nails placed into it through her body.  That's creative, but pretty damn silly.  The Camp owner gets killed when he gets a bird cage put on his head some sort of animal placed inside.  As for Hayes, he just sort of stops showing up in the film- odd.  The killer eventually goes after the blond girl, but the cop saves her.  Pay attention to this plot point too.  The lead jerk goes out after Alan and beats him with a mallet before being attacked by the unseen killer.  The blond girl, Angela's brother and the lead counselor arrive to see Alan hurt and the kid skinned.  A laugh comes from the distance as the cop pulls off his mask, fake beard and prosthetic work to reveal...Angela.  After that, the movie just ends abruptly. 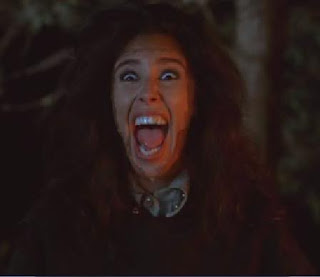 Camp is back and it sucks!  The plot is simple enough, but they screw it up in a number of ways.  How am I supposed to feel bad for Allen?  Yes, he gets picked on- but he also picks on other people.  He's not a victim!  He's just a bully who's a little lower on the food chain!  I don't empathize with him in any way.  It's one thing to try something new, but it's another try something this stupid!  The acting is...well, take a guess what I' m going to say.  Even the people that I kind of like- Hayes, for example- are not good here.  Here's my biggest thing: the plot holes.  If Angela was impersonating the cop the whole time, how come she/he went to see the brother?  It would be one thing if someone else was with her and it was for her cover.  In the film, however, she's alone and she doesn't tell anyone about it.  Was it all an attempt to get the brother to come back to see her in the end?  If so, why?!?  Furthermore, how come none of the paramedics or other authority figures question his/her presence.  Can you really just dress like a cop and nobody asks questions?  I also have to get a special 'shout-out' to the Music Department and their ability to turn the music up super-loud during dull scenes.  Yeah, that totally covers it!  Ultimately, this movie is a disappointment in a number of ways.  I'd rather watch Sleepaway Camp 3 again while having invasive dental surgery done to me! 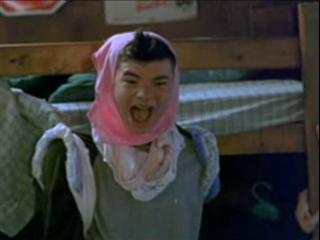 Next up, we get into a week of Direct-to-DVD sequels.  First up is the prequel to an action film almost nobody saw- why?!?  Stay tuned...