A lot of crap in one pile is not really a good thing!  Today's film is not so much a movie as it is a bunch of short movies that wouldn't work on their own.  Confused?  According to an interview I read with Charles Band, he produced this movie- also known as Ragewar, for some reason- as a sort of audition for his Directors.  As such, the movie contains short film segments by such people as Ted Nicolau and John Carl Buechler.  So without this film, we would not have been graced with such classics as Ghoulies III and Subspecies IV- thanks.  So what is the plot?  Basically, 'Not-Satan' captures a computer hacker (who's a dead ringer for the guy from Time Chasers) and his girlfriend, subjecting the former to some challenges while holding the latter prisoner.  As you probably guessed, the challenges are all short films.  They are quite random and only make sense in the context of the film.  In other words, they make no damn sense!  Can I be bored with a constantly-changing film?  Retrieve your Core Rules Book as we go confront... The film begins with out hero at work, proving to be a master of now-outdated technology.  On his bike ride home from work- yuppie!- he uses his watch-computer to change traffic lights in his favor.  Yeah, nobody else has anywhere to go, jerk!  He also takes time to drool over an aerobics class, which just happens to be facing the window.  The movie lingers on this scene for a bit, as you might have guessed.  It's okay, apparently, since the leader of the class is our heroine's girlfriend.  She's troubled by his eerily-close relationship to a computer built with an AI program in it.  He calms her down and they go off to the other room for some alone time.  Yeah, that totally seems like a logical progression.  In the morning, however, their good times are broken up as they are taken to a fantasy world by...Not-Satan.  Richard Moll is here to be an evil wizard who is totally Satan, but also not.  Confused?  It gets better.  His challenge for our hero is to defeat seven challenges.  Scene change! 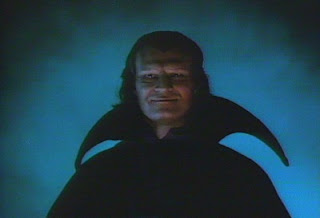 His first challenge appears as he wanders around a jungle environment.  His clothes have been replaced with a powder-blue outfit that looks goofy as hell.  His computer watch is now a computer wristband.  This gets taken by some Dwarves, but they just drop it for no reason.  He gets attacked by a giant, stone creature that fires lasers from a gem on it's head.  How does he beat it?  He shoots the gem with a laser.  That's it. 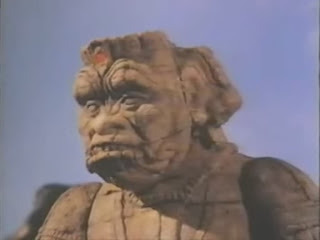 Our hero still has more challenges to go, however, as the danger doesn't end there.

* He ends up in a cave where's confronted by a troll-looking thing.  The solution- laser.  He is eventually confronted by a silly-looking puppet demon.  Gee, this looks like a Ghoulie, so it must be Buechler's part.  It confronts him with a zombie version of himself, which he kills with a laser.  This leads to the most infamous quote of the film...

'I reject your reality and substitute my own!'

* He ends up at a WASP concert (this film isn't dated at all!) where they try to kill his gal.  Yeah, that obscure '80s band is evil now.  He breaks through the crowd and uses his wrist computer to shoot sonic vibrations that kill the band.  What- no laser? 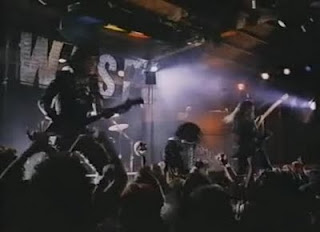 * Another challenge has him ending up in a city where his girlfriend is the next, potential victim of a serial killer.  Our hero escapes a trap and manages to get to the club.  They defeat the killer together- using the laser- and they get away.

* They end up in an ice cave full of the most dangerous killers, including Jack the Ripper, the Boston Strangler and...Einstein.  Yes, that Einstein.  The cave begins to thaw, revealing other killers such as 'The African.'  The key to escape involves shooting a gem held by the Einstein mannequin with, you guessed it, the laser.

*He goes to a cave and shoots the monster with his laser, only to be told that he could have just talked to it.  He apologizes for it, so he wins.  No, really. 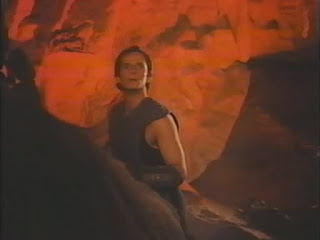 The final challenge comes from Ted Nicolau as our hero and heroine end up in a Mad Max rip-off.  They drive, shoot and get blown up.  So he lost?

Thankfully, the evil Not-Satan is easily-taunted and accepts a final battle between himself and our hero.  Way to steal defeat from the brink of victory!  Our hero tosses the wizard/demon into a pit and pulls himself up thanks to his watch-laser forming a bridge.  Yes, that won't cut your hands off.  Back in the real world, our heroine is over her jealousy of the computer and agrees to marry him.  Why?  The computer did all the work, you bitch!  The End. 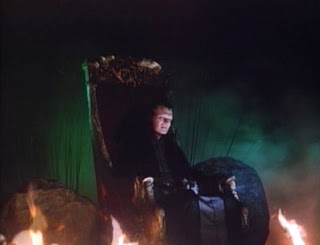 Sorry, D&D fans- this ain't your movie!   The plot is a mess, with numerous sub-plots and a bizarre framing device.  Why does the evil Non-Satan kidnap our hero?   He's bored.  No, really.  Given the amount of effort required to make all of these fantasy worlds and how it actually ends up for him, why does he bother?  Logical issues abound here too.  My favorite involves a scene where Not-Satan talks about a childhood experience of torturing a dog.  All of a sudden, our hero goes on a rant about respecting life and the like.  One- how was the guy ever a kid?  Two- what the hell?!?  The special effects here are pretty low-fi, but some of them look nice.  The puppet (shown below) does not.  It's mouth doesn't move, so they just shake the head around.  You failed, Buechler!  That said, the randomness of the plot does make the film kind of fun.  It's not good by any stretch of the imagination, but it's good for a laugh.  Plus, you can watch it for free (providing you use Netflix).  That's about the price I'd pay for it. 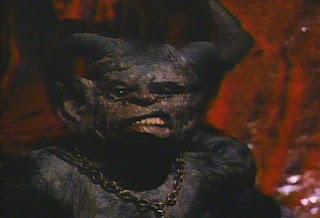 Next up, a movie that is more trailer than movie.  On the plus side, it save you a lot of time watching other films.  Stay tuned...