Mirror, mirror on the wall, who's the lamest of them all!  A Korean film called Mirrors (translated, mind you) was made and apparently deemed popular enough to be remade here.  That film was not exactly a hit, but- you guessed it- the video market was rich enough to merit a sequel.  Fun side note: when my local Hollywood Video was closing down, they had six copies of Mirrors.  Every time I went, they were still there!  Ouch.  Basically, angry ghosts can live on through mirrors and hurt us by taking our likeness.  How this really works is anyone's guess.  This film certainly does nothing to explain it!  Another odd thing is that this movie is really a pretty-close remake of the original Korean film, while Mirrors is not.  Confusing?  Yes.  I suppose if I can make sense of some of the most convoluted film plots this side of Eraserhead, I can wrap my head around this film.  When you read this, make note of the actors who appear in this movie.  Some should be able to do better (Nick Stahl), some really can't (Emmanuelle Vaugier) and others could have at one point (William Katt).  Another important note: this is a late-2010 video release, so SPOILERS will abound.  No complaining, alright?  Get out your Windex so that we can work on the... 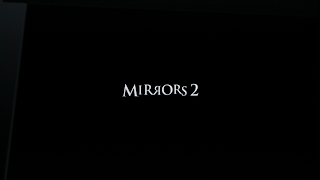 The film begins with a guard doing his rounds one night in a building.  Since I've never seen a movie before, I'm sure that this isn't a set-up to something bad!  He wanders past a mirror and starts to pose in it.  Suddenly, his reflection turns bad, breaks its flashlight and begins to eat the glass shards.  That's rich in fiber, you know.  As he begins to freak out, the movie just cuts to the credits.  Okay, so what happened to him after that?  In some clunky exposition, we learn that the owner of the building (Katt) has a son with a tragic event in his recent past (Stahl).  The guy agrees to take over for the old guard, who just up and quit.  I'd love to see him tell them that with a mouth full of glass!  The boss introduces his son to the main employees aka the victims of the movie.  Don't bother to know them too well, as they are one-dimensional plot devices in human form.  The new guard sees visions of a girl in reflections around the place and is a bit unsettled.  By the way, for those wondering how this is a sequel, there's an off-hand line about a mirror being taken from the original hotel in Mirrors.  That's it.  That night, we see alternating scenes of Stahl walking around and the woman from earlier taking a shower.  When you're showing her naked in the shower and it's not really to set-up drama/suspense, you're just making porn!  Eventually, her reflection turns evil and makes her trip, while a vision of it shows up in the mirror in front of Stahl... 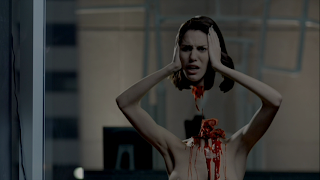 The police look into the crime, but right it off as accidental.  If the glass in your shower is sharp enough to decapitate you from a ten-inch drop, you may want to switch to plastic.  The next night, Stahl goes on his rounds again and sees more hints of things to come.  One of the guys from earlier is seen at home preparing dinner when his evil reflection reveals itself.  It begins to cut itself, causing the same injuries to happen to the guy.  Again- how does that work?  Is it too much to ask for the movie to actually explain it's own logic?  The cops get even more suspicious when two people who work at the same place die in the span of two days.  Logic- I can't believe you stopped by for a visit!  The police question Stahl, but he explains that he has a solid alibi.  As it turns out, he tried to call and warn the guy, since the mirror spirit likes to give him foreshadowing.  He calls his dad and says that he can't work on the job anymore, which the dad accepts pretty easily.  Stahl really freaks out, however, when he sees the evil reflection of his dad on that same night.  He rushes home and stops the kill by...being around.  Odd.  Incidentally, say good-bye to Katt as this is his last scene too.  He just stops showing up...for some reason. 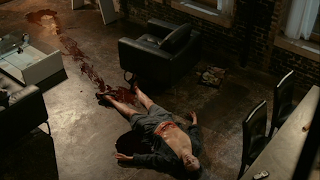 Finally, we get a real hint of the story behind the killings.  Stahl meets up with a woman (Vaugier) who has had a few minor scenes earlier.  She is looking for her sister, who went missing after a company party two months ago.  The pair go to talk to the guard from the beginning, but he's a little freaked out, living in a house with no mirrors.  Mind you, he has reflective metal, but I guess the movie isn't that literal.  We learn that the sister was at the party when three people- the same guys that Stahl met on his first day- messed with her.  The first two victims drugged her and send her home with the third guy, who tries to rape her in the back room of the building.  He ends up killing her when she struggles and the body was never found.  In an attempt to be clever, the movie juxtaposes the flashback with an attack scene of the the third guy attacking Vaugier at the building.  It's really just annoying, guys.  Ultimately, the pair end up in the lobby and by the giant, plot-point mirror from earlier.  The girl's spirit appears and drags the bad guy through, apparently killing him as a blood stain shows up on the mirror.  After that, the mirror explodes!  In the Epilogue, the guard is interrogated for his part- he erased the security tapes of the event- and is left behind when the mirror spirit comes for him.  The End. 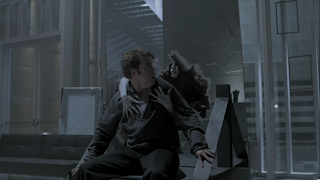 This film has a reflection and it's ugly!  The plot of the movie is a bit confusing, since it likes to hold on to key plot points like a kid with his candy.  Give it, give it!  The idea of the ghost coming back for revenge thing is pretty plaid out from J-Horror and K-Horror films.  Of course, being a remake of a K-Horror film, that makes sense!  I still can't get past the whole 'mirrors kill you' thing.  They don't explain it in any real detail here.  I haven't seen all of Mirrors, but maybe they do a better job.  I kind of doubt it.  This film just uses the basic premise as a set-up to have some gory kills.  If you're just into that stuff, you may enjoy at least part of the movie.  We're only about twenty-minutes into the film before the whole scene with the woman in the shower.  Speaking of which, that scene is just shameless T&A!  As the people over at The Smithee Awards would say, it's an example of the 'Let's Up the Rating to R' trope.  Many films have shower scenes that show little to no nudity, but this one's has a porn star-looking lady.  The acting here is not all that bad, but nobody really stands out too much.  To his credit, Katt's character feels like a real, natural person.  Oddly, I didn't like him as an actor too much in House, but he's good here.  Oh yeah, Stahl is still too good for this crap.  If you like the original film, this has nothing to do with it, save for rehashing the lore behind the kills.  You couldn't spring for a Keifer Sutherland cameo or anything?  It's not terrible, but it's nothing all that good or interesting once you look past the cheesy gore.  Let's just see how Mirrors 3 turns out...since I'm sure they'll make it. 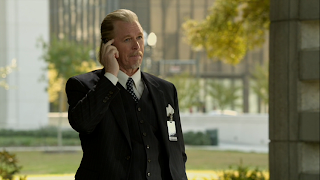