I'll be honest: I hated the remake of House on Haunted Hill.  It was not the worst movie ever made, but it was part of a batch of remakes that completely missed the point.  If you doubt me, I have two words for you: The Haunting.  The film was interesting, but was something completely-unrelated to the original.  Oh look, you named the main character Price- that makes it all okay!  Cut to the year 2007 and eight years have gone by.  All of a sudden, the Direct-to-DVD market has picked up and every film possible is getting 'a sequel' now.  How else do you explain Wargames 2 and Lost Boys 2?  Apparently someone thought that this failure of a film deserved a sequel and got together as much of the original cast as they could.  As it turns out, that ended up being just Jeffrey Combs, a great actor who really needs a better agent.  What's left to say about this haunted house of horrors?  Find out in my review of... 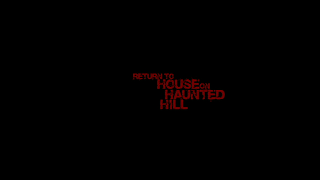 The film begins with our heroine waking up in the morning and ignoring anything not considered to be work.  This includes some frantic, desperate calls from her sister.  Our heroine- a completely self-centered bitch, ladies and gentlemen.  Her work day and meeting with her boyfriend our interrupted by some news: the sister has committed suicide.  We are also introduced to an anthropologist who is obsessed with finding a rare Idol.  Cutting back to our heroine, she and her boyfriend are going into her apartment, choosing to ignore the police tape on the door.  They find that she is a bit obsessed with a certain house/sanitarium.  By the way, there's no Ali Larter and this movie sort of skips around how they got off the high precipice with no exit at the end of the original film.  In the film's defense, our heroine is buff, tall and awkward, much like Larter.  Speaking of which, her stand-in appears in a bit that rips off The Ring (ironically, the director of the original would make Feardotcom, which also ripped off The Ring) & warns her about the house.  They run into the teacher, who warns them as well.  That night, she gets home and discovers a package from her sister.  It turns out to be a diary from the eponymous house that explains where the idol is.  By the way, they have guests. 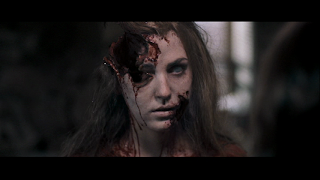 A group of treasure hunters (when they're not Nicolas Cage, they're inherently bad) shows up and explains that they're seeking the Idol too.  They staged the sister's death, but did not get what they wanted.  Now that they have it, they are going to the house & decide to take our heroes with them, since 'the police won't buy another suicide in the family.'  Our heroine is taken inside, while the man is left outside for insurance.  Just before that, the anthropologist, his assistant and a female student wander in...only to get captured.  As a bonus, the hot girl reveals that she is actually aligned with the bad guy.  Burn!  A loud creaking noise occurs, which our heroine says is the place going into lockdown mode.  To circumvent this, the man has his assistants shoot the gears!  Once that's done, the leader says that they have to split up, which our minor comic relief character questions.  Being a horror movie, the bad guys start to die off.  The black guy goes first as the ghosts of formerly-walled in patients pull out his guts and, finally, pull him into the wall.  The hot girl with the gun (not to be confused with the student) gets his next.  She escapes a pair of lesbian ghosts (don't ask), only to run into the ghost of Dr. Vannacut (Combs), who cuts her face off, killing her instantly.  Perhaps the most ridiculous death is given to the tough Australian henchman as he is pulled into the air by bed sheets and explodes into a pile of CG blood! 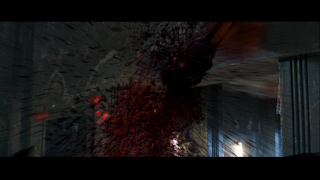 The man guarding our hero is called in and the house retries 'lockdown mode.'  Our heroine actually escapes, but decides to go back in to save her man.  Oh and the house lets her in.  First, it can call you on a cell phone and now this!  With most of his men gone, the villain loses his power and has to play along with the others.  Their trip through the mansion is long and dangerous.  At one point, they end up in a pool of killer zombies, which spells the end of sarcastic guy.  Gee, someone saw The Descent, huh?  The bad guy actually ends up getting trapped in a furnace and burned alive.  Mere seconds later, burnt and ashen zombies chase after the survivors!  Their constant menace is Dr. Vannacut, who actually gets to really do things this time around.  Ultimately, our heroes get the Idol in a true Raiders of the Lost Ark moment, but the anthropologist goes all heel on us!  He engages in a fight with our heroine before Vannacut arrives.  In a true cheat, he can choke us, but people literally pass through him.  Pick a ghost rule, movie!  The day is saved...for our two heroines when they toss the Idol away, causing the ghosts to recreate the cycle of violence from before and kill Vannacut...'s ghost.  They all live happily ever after...until someone else finds the Idol in the Epilogue. 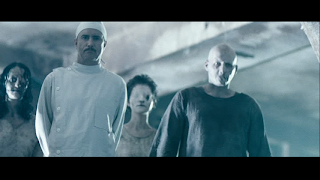 This movie is alright, but barely has anything to do with the original.  Let's be honest: this movie's plot is really just filler.  The whole point of this movie is to have a bunch of odd gore scenes that bring in the 'freak crowd.'  As part of said 'crowd,' I can see the appeal in them, as most of them are pretty creatively-executed.  Ultimately though, this film is a giant mess.  The whole thing with the Idol is never really explained and just serves as a MacGuffin.  Does it have some sort of powers?  Maybe.  Considering that the ghosts were killing people before, I don't know how you could tell.  If anything, this de-powers them, as the weird black fog thing (way to steal that, by the way, Lost) is nowhere to be found.  I suppose you could argue that this is more of the ghosts acting out than the house is, but why would the house be calling people and working with them?  The Wikipedia plot description mentions something about the Idol being 'addictive.'  Maybe you watched a different film- one that actually made a little bit of sense.  On the plus side, it has a gun-toting lesbian getting her face cut off by the dude from Re-Animator, so it's not all bad. 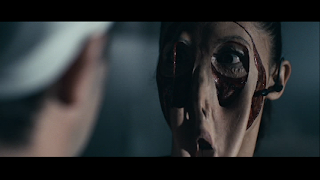 Next up, I take a look at the sequel to a cult Asian horror film...which is actually the original film.  Wait, what?  Stay tuned...
Posted by Alec Pridgen at 7:33 PM