Takashi Miike is just a screwed up guy- let's be honest here.  The man is responsible for some sick shit and some weird shit.  More importantly, he's responsible for such a wide-range of stuff.  I mean, this guy made Audition, Zebraman and The Bird People in China.  Does this man have some sort of obsession with doing every type of film imaginable?  He also has an obsession with putting in extreme and dramatic gore into his movies.  Why?  I guess to challenge us as a society to accept the truth of how short and tragic life can be.  That or he really likes blood.  This film is best described as Takashi Miike's version of Robocop...not that any preparation would help.  This is... 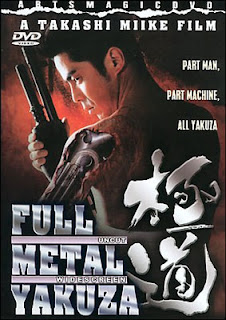 The film begins with our hero fawning over a Yakuza man as he works for him as an intern.  The man goes off on does an assassination mission.  It's bloody and violent...which should be no surprise really.  The one thing to note: he cuts off one man's arm, but doesn't kill him.  Evidently, you can survive the blood loss and shock like a character from Kill Bill (you know the one).  Jumping ahead seven years, our hero is officially part of the Yakuza, but is not very good at it.  After failing to extort money from a mechanic, he is 'thrown over the cliff' by his buddy and demoted.  He also has a failed sexual experience with a woman and is beaten up by some teenagers.  The day looks up when his idol is freed from prison and rejoins the organization.  However, there is an undercurrent plot involving two people vying for the leadership role (one of whom is the newly-released man).  All of a sudden, a hit is put out on the man & he is shot by some men alongside our hero.  After a dream sequence, he wakes up as...a head on a table.  Ruh roh. 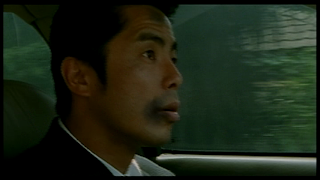 Everything is explained to us in a giant plot dump.  Basically, one of the Yakuza men sold their bodies and the mad scientist managed to make a cyborg.  He took most of the key parts from the tough Yakuza man (including his permanently-blurred out junk) and put them on the cyborg.  He teaches our hero how to use his robotic powers and to defend his few vulnerable parts via a defense tactic that looks like ballet- bad ballet!  Faster than you say 'blood, death and vengeance' our hero goes off seeking revenge.  He confronts the boss and beats up his former friend, but leaves him alive.  He kills some Yakuza before being directed to a different group who *definitely* are responsible.  He kills a bunch of them before being told that there are still more people to get back at.  Tired, he hides out a tent on the beach instead of doing more killing.  He runs across the woman who was working with the tough Yakuza in the beginning.  She explains that she is/was hopelessly in love with the man, in spite of seeing him split a man's head not five feet away from her.  They almost have sex, but the sight of the man's grafted-on back tattoo is too much for her. 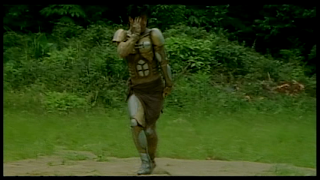 In desperation, she tries to kill the crime boss who made the hit, but fails.  She ends up being captured by the people, put in a weird bondage situation and used as leverage.  Their goal: make our hero kill a different enemy.  He does this in the same style as the other Yakuza before, a fact that the movie feels the need to hammer in like a metal stud!  That night, a Yakuza man meets up with our hero at his beach tent, but the second-in-command (who also played the lead Xillian from Final Wars) blows up the tent.  Our hero escapes and leaves one of his cybernetic eyes behind to help him find them.  What he sees, however, is the people gang-rape his lady until she bites her tongue off and dies.  Yeah, good plan!  He kills a bunch of them in a bloody manner and finally faces off with his best friend.  A random sub-plot involving him being part-human shows up, but quickly vanishes as he cuts his foe in half after a ninja dash.  Unfortunately, his robot heart gives out and he dies.  The villain shoots a bullet in his mouth, but that proves to be enough fuel (don't ask) for him to shoot a never-before-seen tendril out and kill him.  The crazy scientist shows up and talks about making a new robot.  Our film ends with him flashing a Yakuza man (also blurred out) for no apparent reason.  Okay. 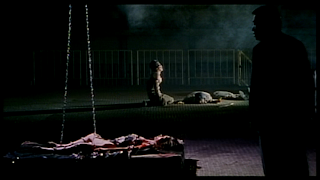 Yeah, this movie is...something.  It has a bit of an identity crisis, but I am not that surprised.  After all, this is the man that made a quirky, musical comedy involving a rash of accidental deaths at a B&B.  This is also the same man who made a family film involving evil demons throwing friendly Earth spirits into a giant furnace.  Hell, this guy made a time-tripping samurai film that's apparently about an existential journey of redemption!  For those wondering, those are The Happiness of the Katakuris, The Great Yokai War and Izo, respectively.  What about this film?  It's interesting, but uneven.  The gore comes at random points, as does the comedy and dramatic elements.  I suppose if I produced nearly 80 films in 20 years, my films might be a bit confusing too.  If you like action and gore, there's not a lot of it here.  It's mostly a big, quirky mess that is truly a Miike film.  Take it or leave it, really. 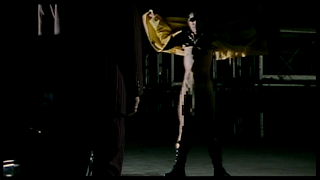 Up next, a controversial Japanese film is finally reviewed.  Do you like incest, sadomasochism and rape in your nun films?  Stay tuned...
Posted by Alec Pridgen at 8:26 PM

Email ThisBlogThis!Share to TwitterShare to FacebookShare to Pinterest
Labels: miike