WTF Germany?!?: Revenge of the Rats

Let me explain a bit here: my plans did not work out too well.  It was simple: I'd review the two Rats films from Germany around my reviews of three Daughters of Horror films.  Ah, how that went downhill fast.  The second film in the Rats series and my last Daughter film went on a wait about three weeks ago and have yet to come out of them.  I was supposed to get Devil Bat by yesterday, but that shit is not here.  In the meantime, I'll keep you occupied by this weird German film that has a sequel that will be reviewed...sometime next month.  I swear...that it might happen.  Break out your Black Plague cure for my review of... 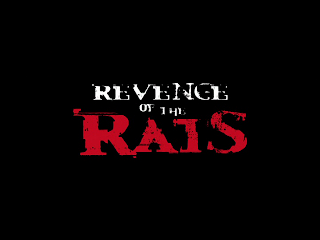 The film begins with a man feeling really bad about something happening.  We get a bunch of random shots that don't explain anything.  Eventually, we get our heroes: a crack, action team with big goals.  For example, their big mission involves going into the sewers and rescuing a girl who got trapped while trying to find her lost dog.  Our hero- who looks like the host of Dinner: Impossible- saves the day by smashing a transformer, causing the power to go out.  This is an important plot point to set-up how our hero is reckless and will do whatever it takes to save the day.  That...bastard?!?  We get a couple of interesting plot points to pad out the run-time as well.  Basically, the girl's mother is a hot doctor who falls for our hero.  Meanwhile, a trash worker's strike primes Frankfurt (by the way, watch how much they disguise the German setting) for a rat infestation.  Of course, that's not enough drama, so we have to have a rat-related plague.  You aren't going to focus on the rats too much, are you? 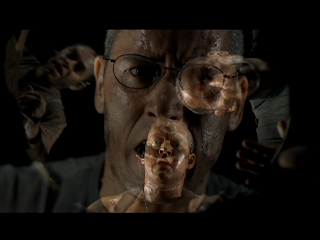 Finally, we get some real action as the men go down into the sewers.  After a talk about how they need to be careful with fire, they go down into the sewers with flamethrowers.  I'm not sure whether you should base your plans on ideas from either C.H.U.D. or Slugs, guys!  Naturally, this doesn't end well as a bunch of them are killed by rats.  They make a dramatic escape attempt, but one of them gets crushed by a car whilst in the manhole still.  Oh, that's what the weirdly-dramatic introduction was about.  Things escalate as the rats are still a threat, a plague is still out there and that damn puppy from earlier is still missing.  Hey guys, pick a plot, please!  Meanwhile, we get more of the romantic sub-plot and a bit where the girl makes a new pet rat.  Aw, I'm sure that it won't lead to a sequel or anything.  By the way, is that thing named Ben?  The middle point of this movie is dragged down ever further with a lot of scenes of people talking about what they're going to do.  As a bonus, we get a whole sub-plot with one of the men wandering around sick in the streets and the girl trying to find him.  Action, people- action! 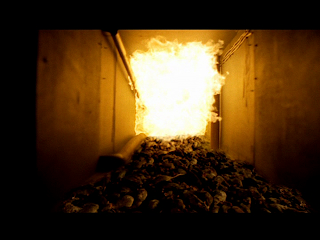 Are you ready for the big finale, bitches?!?  Our heroes gather their resources to take out the infestation.  Of course, by 'resources,' I mean a shit ton of explosives!  It all leads up to our oddly-buff hero going down into the tunnels to set a bunch of C-4 at a key location.  He's willing to risk it all because he was bitten by one of the rats and will not live if this fails anyways.  Wow, that's a defeatist attitude, huh?  After a lot of false tension, he sets the stuff with a five minute timer.  Naturally, his simple escape route is blocked by crazy CG rats and he has to improvise.  This leads to him narrowly diving out of the way of an explosion in the tunnel.  If you ever wanted to see flaming CG rats flying at the camera, this is your movie.  Some more false tension is given to us as it appears that the man died during his efforts.  Of course, he's actually still alive and even manages to rescue the puppy!  All is right with the world as he embraces the woman in front of a crappy green screen background that looks like a low-rent Cabinet of Dr. Caligari.  The End...Oh yeah, we also get a shot of the rat pet from earlier swearing revenge at us from its nest.  Now, it's The End. 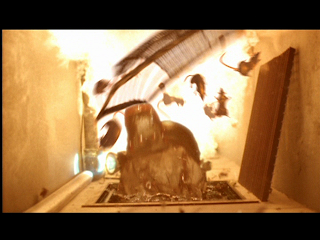 This movie is really not that good, but it is for a lot of reasons.  The pacing is bad, the writing is stiff and the action is lacking.  So yeah, there are a few key reasons.  The plot is simple enough, but it is dragged down with some melodrama and unfocused writing.  That said, the rat action you get is pretty good, although the CG rats look more like the ant swarms from The Hive than real creatures.  It doesn't help that the American DVD only offers a dubbed audio track and no option for Subtitles, huh?  It just serves to make the action all the more silly and the dialogue more campy.  In a way that helps, but it mostly hurts.  You get no feel for the performances and the characters are just more one-note.  On the plus side, there is a good message to take out of this.  See, even foreign countries can make generic drivel- it's not just us! 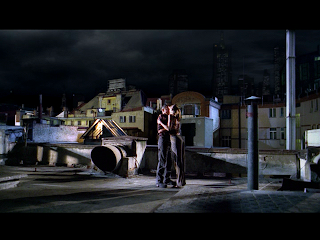 Will I review the sequel to The Devil Bat tomorrow?  It's all up to you, Netflix.  If not, I'm stuck with Fred Olen Ray.  Stay tuned...
Posted by Alec Pridgen at 11:54 PM