Did we really need four sequels to Return of the Living Dead?  It's good and quirky, but it really needed them?  On top of that, the last two were made to air exclusively on the Sci-Fi Channel.  Ah yes, the channel that airs films by The Asylum and claims that they made them.  Yeah, those people!  This film, for once, is supposed to be a follow-up to the last sequel.  What- no retcons or remakes?  Of course, this is barely-related and ignores a lot of key elements.  For example, we have the same male lead from the first film, but no mention of the fact that his parents were brought back as military-weaponized zombies.  Hell, there's no mention of the zombies at all!  It's like 'I don't recall any of this that just happened!'  This is the question: is it a good movie?  Well, no.  For more detail, check out my review of... 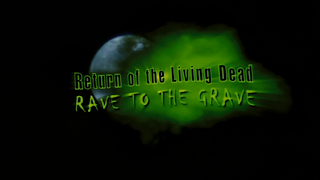 The film begins with a truck carrying a Trioxin 5 drum to a mysterious location.  Seem familiar?  Out steps, you guessed it, Peter Coyote.  Apparently, he escaped the zombie outbreak and the military without a scratch- uh huh.  He is selling the drum to some foreigners, but they want a test.  Fortunately, they have a trio of corpses to do it with.  Naturally, they come to life and wreak havoc.  We also get the people not shooting zombies in the head at first, even though they say out loud that they have to in order to kill them.  That's still not how it's supposed to work here!  During the chaos, Coyote's character dies, but not before making about five or six wacky expressions.  We cut to a High School and our young leads, one of whom is from Part 4.  Apparently, he's gotten over the whole zombie outbreak thing and has new friends.  He is saddened to hear about the death of his uncle, in spite of hating him in the last film for making his dead parents into weapons!  He goes to the guy's place and discovers a hidden room that contains two Trioxin 5 drums...and the outline of where a third one was!  Him and his lady go to a party- a pretense to show breasts and drug use- to find their chemist friend.  Guess what he uses his scientific knowledge to make! 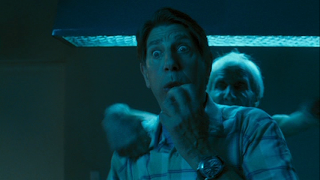 Anyhow, he tests the stuff in the drum and learns that it contains many of the same elements as Ecstasy.  Naturally, one of his friends tests the stuff on himself and likes it, despite it making him comatose for five minutes.  Our hero insists that they leave it alone, but they make pills out of it anyways and spread the shit around in a 'dealing drugs' montage.  Real classy, guys.  A trio of College cliches take the stuff and turn into zombies, chasing their other friend around.  It all ends up at a band's practice session where one of them is stabbed to death with a drumstick and the other is decapitated with the swing of a guitar.  Apparently being a zombie makes your flesh and bones turn into paper mache!  While this is going on, our hero's girlfriend tests the stuff on some lab rats and fails to leave a control subject.  Say what you will about how shitty the drug-dealing chemist is, but at least he knows how it works!  Our hero goes to the site of the upcoming rave to help them build the set, leading to, you guessed it, an '80s 'fixing stuff up montage!'  Two montages in one movie?  What are you, Operation Scorpio?!?  Eventually, the foreign guys from before meet up with our hero and they figure out that the drugs turn you into zombies.  Guess where they shipped the rest of the stuff!  Oh yeah, we also get a pointless cameo by Tar Man.  I finally get why people view 'fan service' as a bad word! 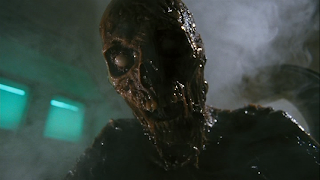 Back at the rave site, the DJ who has been taking the zombie drug for a while turns, but only after dispensing some of the stash to the rest of the party.  Our heroes arrive with the foreign guys in tow, but tell them that they will stick out too much.  Naturally, they steal the Valkyrie costumes of two hot girls...and they fit...and they're large on them.  So yeah, a zombie infestation breaks out and people are getting bitten left and right.  Our heroine is going to find the DJ, since apparently he's her brother, while the chemist/drug dispenser is looking for his girlfriend.  By the way, the DJ is her brother- thanks, random plot point.  She finds her bro too late and our hero tries to fend him off.  Like last time, he gets his ass-kicked, only this time the girl saves him by killing her brother.  Tragically, the zombie died because he was trying to make the kill look dramatic.  The chemist finds his lady- whose dressed as an Indian- and tries to get to her.  The two foreign guys start shooting the zombies and try to save the day, but it's a bit like emptying a river with a bucket.  The girlfriend actually starts killing some zombies by shooting them with the bow & arrow as part of her costume.  Thank God they were real weapons and you're a trained archer!  Bye, logic.  The chemist dies tragically as he chooses to save her instead of himself with his last bullet.  Thanks for the dramatic moment in a comedy, guys.  This is all for naught as the U.S. military shows up and starts shooting, killing her and dozens of others.  They drop and bomb and kill everyone save for our hero, his lady and one of the foreign guys.  Did the other one die in a Deleted Scene, movie?  We cut to Tar Man who finally gives up hitch-hiking and goes for a 'David Banner' walk.  The End. 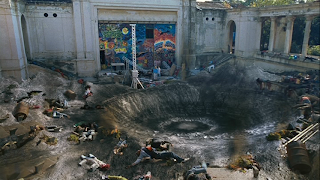 So yeah, this is not really a good movie.  Unlike Part 4, it is meant to be somewhat comedic.  That said, it's really not that funny.  It definitely wants to be and I can see how they might have taken it as such.  The jokes are either too direct- ha ha, guys are dressed like Asterix and Obelix- or just plain weird.  You can tell a series has been stretched too thin when they feel the need to have zombies say 'brains!' every three minutes too.  Seriously, make a drinking game out of this and you'll love the movie so much more.  That said, it wasn't boring and it had some decent zombie moments in it.  It was a bit too obsessed with the image of the zombies killing people by taking one bite out of their head.  Incidentally, why is it that they can bite through a human skull?  I know we're talking about zombies here, but teeth are actually made out of a less dense material than a skull, I think.  After four sequels, I just felt like asking that, I guess.  Do yourself a favor and stick to Part 2 for pure comedy (if viewed on its own merits and not as a sequel) or for Part 3 for some interesting zombie action.  If you skip this, your life will be about the same. 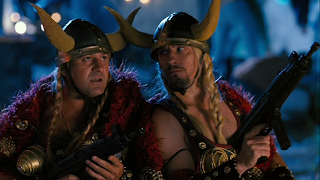 Next up, I look at a pretty obscure horror series that took an odd manner in regards to storytelling.  Oh yeah, it also has zombies/vampires in it too.  Stay tuned...
Posted by Alec Pridgen at 5:45 PM