I'll be quite clear from the get-go: I was not sure what to expect from this movie.  Even Netflix's description really tells you nothing about what to expect.  All I knew was that it was going to be disturbing and controversial.  In that regards, the movie is a big success.  In terms of being an actual movie, I'm still a bit on the fence about the whole thing.  At first, it appears to be a series of unrelated vignettes.  However, it does turn into a sort of narrative about a family.  Incidentally, if you ever wanted to feel good about your own family, watch this movie!  For everyone else, read my review of... 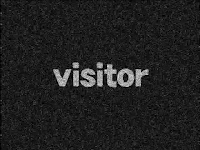 The film begins with a long scene involving a man having a tryst with a prostitute.  It's a bit hard to follow, since it alternates between a steady-cam shot and a hand-held one.  If you want to be an art film director, Miike, you're on the right track!  I say it's long because it runs for about five to ten minutes long.  After this, we see him boarding a train.  For no apparent reason, a man picks up a rock and bashes him in the back of the head with it.  Um, what? 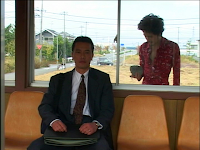 We cut to a kid coming home and beating the crap out of his mother for buying the wrong toothbrush.  He actually has a whole collection of sticks to beat her with.  You have issues, kid! 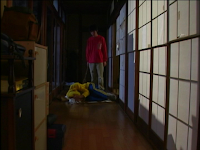 Our narrative cuts to the man walking home at night and looking paranoid.  He also has his head wrapped up in gauze, implying that he went to the hospital at some point.  He's very paranoid, but eventually calms down.  Mere seconds later, the same man from before clubs him in the head again!  Why?!?  Back at home, the kid goes to his room, puts on a gas mask and tries to sleep.  Before that can happen, a bunch of kids throw fireworks at his windows until they run out.  Why?!? 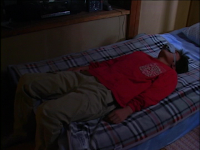 Finally, the narrative ties together as the man arrives at home...with the man from before.  After showing the mom trying to cover her bruises, the family sits down for dinner.  The kid beats up the mom again, which is something that the two men seem to ignore.  They don't even flinch when she is thrown through a door and merely ask for more ice.  Why movie, why?!? 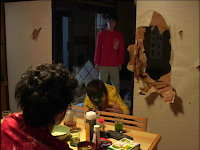 More weird randomness occurs at the woman puts green make-up all over her face to cover up...the beating, I guess.  What is that shit exactly?  We get an awkward scene involving the mysterious attacker hugging the shirtless boy and asking him about his sister.  The movie eventually explains- sort of- that the young prostitute from earlier was actually the missing sister!  Did the dad know this? 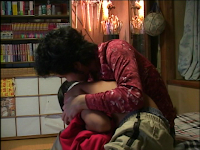 The last straw for me involves a scene where the guy watches the news.  A reporter goes to talk to some youths.  Instead of talking, they beat him up and violate him in a way that was only legalized a few years ago in Texas!  Why, dear God, why?  Yeah, I'm done here. 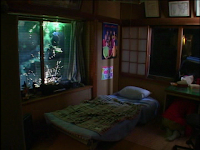 That's right- I didn't finish this movie.  I would normally not do two reviews like this within a week, let alone at all.  In this film's case, I really did try.  I even fast-forwarded to later parts to see if it was more bearable.  All I know is that the mom becomes a prostitute- so, no.  The film is just so damn confusing and just so damn random.  Mind you, this is the same director who made Izo, so I shouldn't be that surprised.  That said, Miike has done some films with a simple...ish narrative (The Happiness of the Katakuris, Zebraman and The Great Yokai War).  Hell, Full Metal Yakuza feels like one of those 'Idiot's Guide To...' books by comparison!  This movie just feels like a series of bizarre ideas thrown into a giant pile and then filmed.  I get it, Miike- you're weird and experimental.  Next time, try making a story and I'll see how that goes! 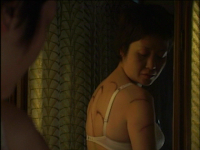 Up next, Blockbuster Trash returns from hiatus with one of the two made-for-DVD sequels to Return of the Living Dead.  Has the series rotted or come up fresh?  Stay tuned...
Posted by Alec Pridgen at 2:13 PM