I really don't like holidays.  It's not that I have no holiday spirit or anything.  It's actually due to the crap that I end up watching on them.  Case in point: the entire two weeks around Christmas, which brought some 'classics' like Psycho Santa, Satan Claus and Feeders 2.  Speaking of Feeders 2, it was a film made by the infamous Polonia Brothers.  They were behind a shit-on of movies (today's film is apparently their 22nd!) and this continues to this day.  Of course, one of them died tragically in 2005.  On the plus side, it is long enough ago that I can freely mock him and his kin for their shitty movies.  This magnum opus was shot in 6 days and with a budget of less than what a single Friends cast member got in those last few seasons.  This is... 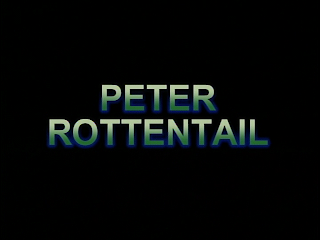 The film begins with a crappy magician failing to perform a trick or two at a party.  Get used to the word 'failing' in this review- it will show up a lot!  After leaving in desperation, he runs into a man who looks like Rob Zombie...as a bum who gives him some potion made out of witches tears, a virgin's blood and all sorts of cliched crap.  At the next party- hosted by one of the two Polonia Brothers- his tricks end just as badly.  In desperation, he drinks the potion and says that he is going to summon the spirit of Peter Rottentail.  Just to note: he was not told what the potion would do...so why did he think that this would work?  After getting booted from the party, he is spoken to by the spirit of the mysterious 'Zombie bum.'  A hat and a meat cleaver appear on the ground, he looks at the kid who walks out and...the movie cuts to the man committing suicide for fear of being arrested for what he did.  Um, what was that exactly?  As a bonus, the hat has hole already cut in it.  Why ever would it have those?  We are next introduced to our main characters: a redneck loser and a guy who looks like Lee from Still Gaming.  Joy. 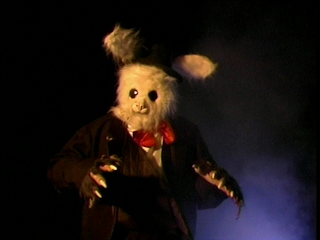 Our two heroes are given the task of cleaning up grandma's house in order for it to be sold by the uncle.  Before that, a pair of stoners wander into the place looking for pot.  They stumble across a book and proceed to read a magic spell.  How magic is it?  It appears on the inset cover a book that has no words in it!  I know this because the actor turns the book just far enough downwards to reveal this fact.  Our title character shows up and stabs them to death with a carrot.  I can believe a lot, but you're pushing it, movie!  So this sub-human killer is the magician who escaped his own grave and plans to kill the now-grown-up kids from the party.  He gets one of them at the front of a house by tricking the bum into drinking witch's piss, which melts his insides and causes blood to pour out of his mouth.  Of course, since this movie has to pad out it's 65 minute run-time, he does this after about five minutes of stupid antics.  I'm more amused by Chucky and I freaking hate that puppet!  We also get a seemingly-unrelated sub-plot about a neighbor woman.  Oh, there is eventually pay-off, but it's stupid as hell. 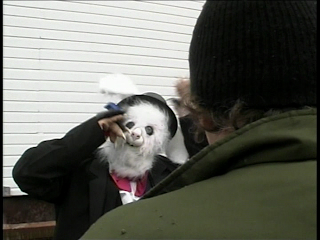 After some more filler- including an 80's-style fixing things up montage- another random guy is killed by Rottentail as he sits at a pay-phone.  This adds nothing- thanks, movie.  The two heroes have some trouble and arguments about the 'Lee' constantly harping about the party from the beginning.  It's run into the ground so much that even his best friend hates him.  One unintentionally-funny bit has the white trash guy going to 'a strip club' that consists of the corner of a basement and a pinball machine!  More filler comes as Rottentail sneaks into the woman's house, only to say that he has no time for this.  Why did you do it then?!?!?  After showing the same 'going to bed shot,' the rabbit breaks in again later and greets her with a flower.  Naturally, she invites him in for sex.  Back to the 'plot,' Rottentail kills the white trash guy with the carrot through a silly P.O.V. shot.  When his friend comes back, he faces off with Peter.  Oh and he relives his memory of being chased to...safety.  You built all the way up to that nothing reveal, movie?!?  A silly fight breaks out and Rottentail is defeated after his hat is taken off and stepped on.  In our epilogue, the woman from before gives birth to...a talking Rottentail baby.  No sequel for you, movie! 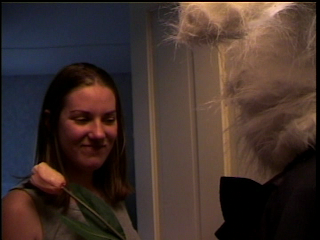 This shit is terrible- plain and simple.  Mind you, it's a Sub Rosa film and by the Polonia Brothers- I knew that.  That said, it still managed to be more annoying and insulting than I could have possibly thought.  Where to begin?  The shitty writing, acting, production, editing and effects.  Yeah, that's a good start.  We get unimpressive deaths, annoying characters and a graveyard that looks worse than in Plan 9.  The film's production year- 2004.  The acting is incredibly-bad and even makes student films look bad.  That's the real key here: assumed quality.  While I don't expect much from Sub Rosa, the Polonia Brothers state in the Audio Commentary that this was their 22nd film.  Wouldn't you think that they could have put out an adequate plot or production by then?  One scene that summarizes the quality is this one.  The two leads go to the crappy graveyard and 'discover' the bodies of the stoners from earlier.  The lone shot of the bodies consists of them lying on what is clearly a carpet.  Close me out, ironic shot of a Polonia brother. 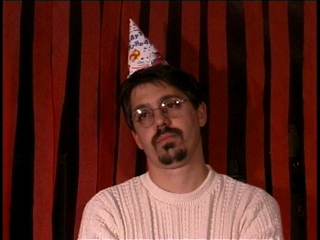 Next up, a British comic comes to us as the follow-up to my review of Gwendoline.  Will it be a dud or as awesome as a chariot pulled by Amazons?  Stay tuned...
Posted by Alec Pridgen at 7:20 PM