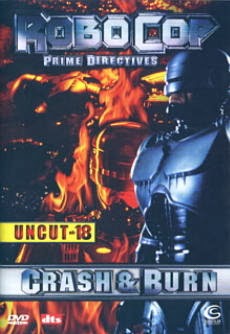 How much Robocop is too much Robocop?  Well, we're in the final stretch of the Robocop: Prime Directives miniseries so let's wrap this up...

* To recap, evil Dr. Kaydick (pronounce it slowly to get the pun) is going to unleash a terrible computer virus into SAINT, the program that will soon automate the city.
* Robocop's former partner has been turned into a Robocop himself and is forcibly-working for Kaydick.
* His adult son has finally learned about his dad's identity/fate and is going to help them stop the bad guy.  Phew.

The story starts out slow with people standing around and talking about what they're going to do.  After about ten minutes, all hell breaks loose and there's really no major respite for the next 80 minutes.  Hey guys, ever hear about pacing?

One odd bit involves some comedy.  It features a janitor fixing up OCP's glass doors and complaining about how people keep breaking them (see all three previous parts).  What's the pay-off?  You guessed it...

Inside the building, Robocable and Kadick (with the daughter/virus host in tow) go one way, while Robocop, the hacker lady and the son go another.  They share the same destination: OCP's top floor and the home of SAINT.

*
Another odd bit involves Robocop's talk about not killing.  His method: crashing cars and shooting cops in the kneecaps.  How long before that rule is broken by the lady?  About three minutes into the interior fight scene.  Oh well.

Kaydick/Cable find the former Mrs. Cable and drag her along to open the doors.  Likewise, our heroes grab the corrupt President of OCP (after he killed the Executive Board) to do the same.  The trip is rough, especially when Mrs. Cable decides to badmouth her now-cyborg ex-husband.  Does Robocable have to choke a bitch?

Finally, at the top, lots of action goes down.  OCP security have a shoot-out with Robocable, but Robocop intervenes.  How do they pay him back?  By blowing them both up with a grenade.  They eventually get up and fight some more.  It's a race to get to the top before SAINT is in control of the city.  Get out your stopwatches!

Ultimately, Kaydick gets the virus (it's called LEGION, by the way- ha ha) uploaded, but gets defeated by his former wife (aka hacker lady).  Something weird goes down and they both get digitized away.  Why?  I'm honestly not sure.  Down at floor level, the OCP President gets hurt and ends up in the lobby.  He tries to drag himself away from the automated lasers, but...

Damn!  It hurts even worse when he realizes what happened!

Yeah, he dies.  Is anybody really crying about this?  Nah.  Robocable seemingly-kills Robocop before they set off the EMP bomb from Part 3 (serious Chekhov's Gun action here!).  Robocop survives however and is left with a programmed message from Cable.  Apparently, he shut off his buddy, which made the EMP not destroy his circuits.  Um, does it work that way?

With the day saved, Robocop walks off into the sunset...to not do anything for the last ten years since they made this.

Is this a good miniseries?  Well, yes and no.  It definitely could be trimmed down a bit, but certain things are accepted when you're talking about stuff like this.  I wish they could have kept a little continuity with the casting here (this is, after all, the FOURTH actor to play Alex Murphy/Robocop).  Apparently, they tried to get the guy from the 1994 show, but something got in the way.  One thing to note: this thing randomly features shocking and dramatic death.  There's no build-up; it just happens.  Recall the guy split by lasers in Part 2?  It makes things interesting, but is still pretty damn weird.  You can track this whole thing down on Netflix or in a video store...assuming you still have any around you.  If you like the character, it's worth seeing.  If not, you may not make it through the whole thing.

Up next, I take a look at a syndicated action show that tries to be X-Men...on a tv budget.  This should be interesting.  Stay tuned...
Posted by Alec Pridgen at 10:56 AM