How come this Sequel isn't ever talked about?  Today's Film is Repossessed, the only Film that's a real Sequel to The Exorcist.  Yes, Exorcist 2 has Regan, but that's pretty much.  Yes, Exorcist III has Karras (sort of) and a new guy as the Detective, but he wasn't exactly the biggest part of that Film.  This one has Regan, Pazzuzu, new Karras and even less electro-shock therapy.  Sure, some may call this a Paroday of the Series, especially since it was released in the same year as Exorcist III.  The Plot involves Regan facing evil yet again, this time with a new Priest on her side.  Will she be able to conquer her literal demon this time?  To find out, read on... 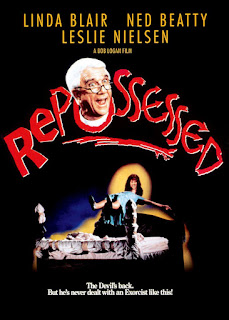 As Regan is freed of her possession in 1973, the Demon vows to return.  Oh crap. 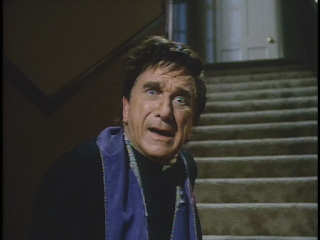 The Demon politely waits nearly 20 years before retaking control of Regan via the TV.

If only there were groups like the PTC around back then to warn her! 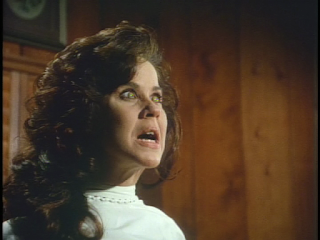 Two things to note about this Film....

First- the Film is full of many dated jokes and bits of Casting.  For instance, this Oliver North gag and this extended Cameo by The 'Body by Jake' Guy.

Second- the Film is full of many quick sight gags that are actually clever.  For instance, this bit with Handicapped Parking Spots and Blair reaching across a split-screen to hang up a phone.

I should note that the Story is framed in a Flashback via Leslie Nielsen telling said Story to his class.  How the Priest appears for a Rap Number is anyone's guess then. 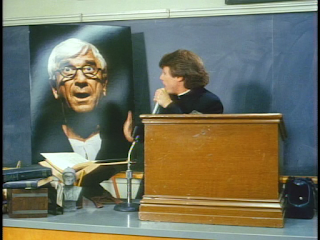 Nielsen's Priest is not up to the task of exorcising Regan again, so they'll go with Plan B... 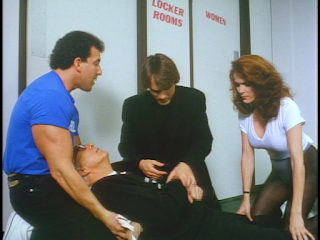 A Televised Exorcism with some Jim and Tammy Faye Bakker Parodies.  Timeless stuff! 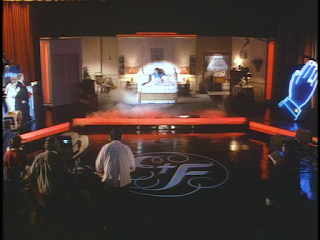 A load of sight gags happen at the Exorcism after Nielsen shows up.  There's even a version of the same joke they'd use in Dracula: Dead and Loving It a few years later.

Ultimately, the power of Rock (and dated Parodies) wins the day.  Seriously, how many people get this one? 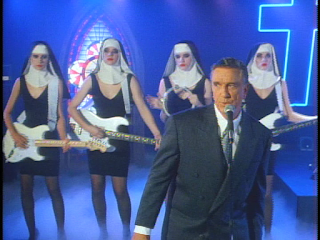 When one Student questions the Story, he's doused in a double dose of projectile vomit from Blair and Nielsen.  That Student- Willie Garson. 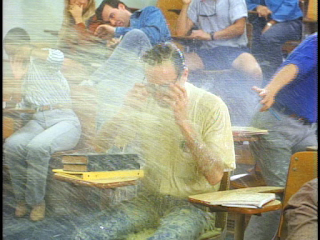 Okay, the fun is over.  Repossessed is obviously a Parody of The Exorcist.  It is interesting that they made it a Sequel.  Did they do it when Blair made herself available?  Did they realize that the Story of a young Girl being possessed by a Demon isn't going to be that funny?  Whatever the reason, it was a good call.  The Film does Parody key elements of the 1973 Classic- the Vomiting, the tossing of Holy Water and the shaking Bed, just to name a few.  To the Film's credit, the riffs on those bits are pretty good.  This is from the Airplane School of Comedy- constant jokes that fire quickly.  Don't find a joke funny- here's another 5 seconds later.  That helps the Movie cover up its weaker and more dated material, since it passes by so quickly.  You still need to have more winners than losers for it to be a completely-winning formula.  The results- most of the Film is so-so.  I hadn't seen this Film in Years- back when it was on all the damn time on Comedy Central.  I was expecting to like this one alot less than I did.  It's not great, but it has some good moments.  Repossessed is often overlooked for a number of reasons.  It was Directed and Written by the guy who brought us Meatballs 4, Starred the Lead from Return of the Killer Tomatoes and it opens with a fart joke based on THX Sound.  All fair reasons, really, but...it is still worth a look for its random and usually-funny gags.

Next up, I get back to the actual Horror I was planning to do.  Sleep well.  Stay tuned...
Posted by Alec Pridgen at 10:37 PM