I'm not sure that I remember this Sequel!  Today's Films is Return of the Exorcist, a 1975 Film from Italy that has many Titles.  Amongst the list, there is Cries and Shadows, The Possessor, A Scream from the Darkness (in Italian), Naked Exorcism and Lucifer 3: The Angel Cursed (in Spanish).  To note, my Version is a rip of the UK VHS Version, which is somehow billed as the THIRD Exorcist Film.  Despite Legion not being written until 1983 and even Exorcist II coming out in 1977, this one is 'the third one.'  I'm sure that it was an issue of the Film being released later, but still!  The Director has an interesting Filmography as he started with stuff like this and Mark of Zorro (with George Hilton aka Jorge Hill Acosta y Lara) before ending up doing lots of Adult Films under a different name.  How do you go from an Exorcist-style Film to The Nymphoniac, The Transexual and The Stud?  The Plot is all kinds of a mess, but I'll do my best to sort it out for you.  If that fails, I'll just make fun of it some more.  To find out how crazy this thing is, read on... 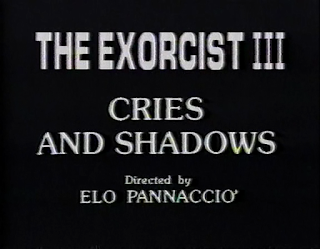 This lady looks super-casual in this Cult Den.  It must be the Feng Shui. 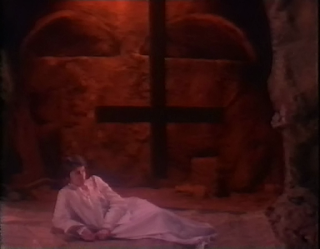 This guy- not Richard Lynch this time- is running some sort of Cult.  I sure hope that this goes somewhere... 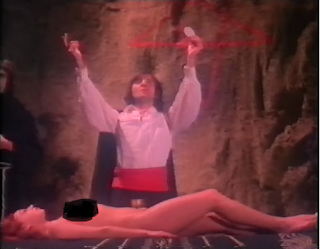 It all leads to this guy being possessed...before they go back and then show us how it happened.  That's...one way to do it. 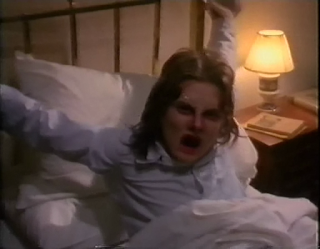 It happens when he sees a naked lady and then takes a picture of her.  He finds a medallion that is apparently evil.

Get used to this lady being naked- it happens alot! 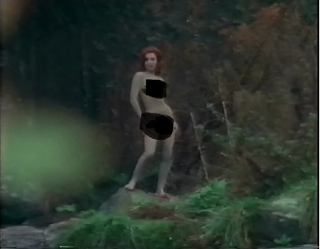 As luck would have it, the guy's Sister is a...Sister- a Nun that is. 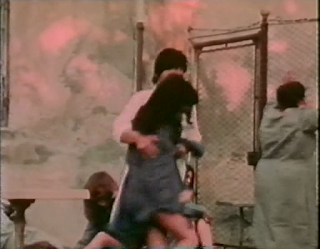 I just want to point out how silly this guy looks.  Is he Andy Gibb? 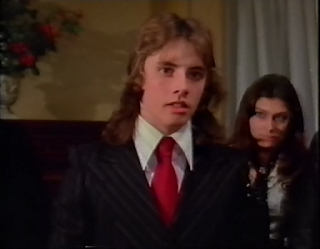 I sure hope that you pretend that this is as interesting as in The Exorcist.  Please?  Pretty please?!? 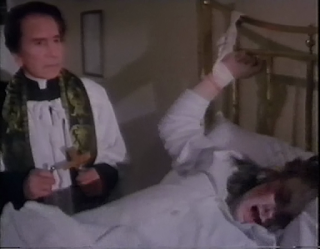 Kind of like The Exorcist, the Sister takes the amulet and dives off of a nearby cliff.  Of course! 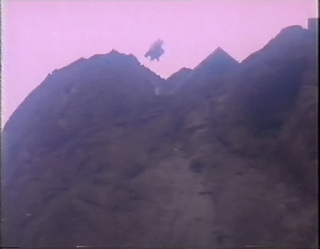 ...only for a new guy to get it.  Pointless and stupid sacrifice for the win!  The End. 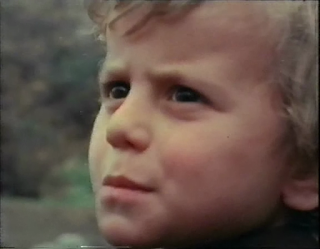 Confusing, dull and bad.  Let me be honest: the Film is so forgettable that I got the Cult Guy and our 'Hero' mixed up.  They look alike, especially in glorious 240p.  Thanks, VHS Rips from England!  I couldn't figure out how he was leading the Cult and then possessed against his will.  The real answer isn't a whole lot better, of course.  Possessed by a spirit from a Medallion found after seeing a naked Ghost Lady- why not?!?  This one is just plain not good.  It is super-forgettable, super-trashy and just plain not interesting.  It is so bad that even the Film Stock is rejecting it! 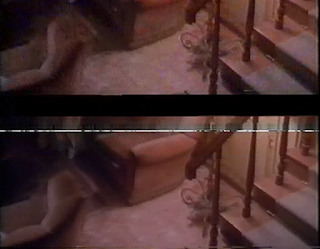 Next time, I cover THE REAL Exorcist Sequel.  For real this time, guys.  Stay tuned...
Posted by Alec Pridgen at 11:00 AM