While most people are focusing on Horror this Month, I might as well showing you something batshit insane.  It is close enough... 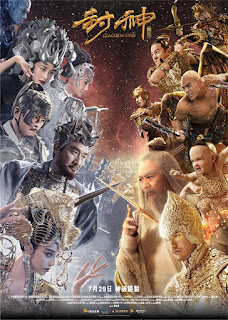 In a time and place not like any Reality, a battle is waged between an evil Empire run by the 9-Tailed Fox Demon and the side of Good.  Also Airships and Ninjas.

Their Leader- Jet Li- tries to save an important person for their cause in a dangerous mission.

When things don't quite go according to plan, the group retreats and decides to seek out a weapon.

Evil is a pretty scary force, especially considering that one of them rides a giant Panther!

Can our Hero retrieve the weapon and turn the tide or will he distracted?  Can Good triumph over evil?  How do Merman, giant Crabs, Dobermans in Gold Armor and a talking plant factor into this?

Most importantly- who the hell designed this scary, scary abomination?

To find out, watch the Film (whenever we get it officially in the U.S.).  The End.

Wow.  Damn.  What?  These are most reactions you could have to this whole thing.  It is just crazy.  League of Gods is just a crazy exercise in excess.  I can only imagine the hundreds (if not thousands) of hours spent animating this Film.  There is so much CG that you almost shouldn't have bothered making it remotely live-action.  Seriously- just make this a Cartoon!  That said, most of the CG is a pretty damn neat sight to see.  Giant Panthers!  A giant Octopus!  Airships!  A Doberman in Golden Armor being ridden by a CG Jet Li!  It is worth nothing that alot of the ideas feel, well, familiar.  You could argue that there are no original ideas any more, maybe, but there is still a limit.  I can't say TOO much to not SPOIL this Film (which just came out in China in July), but, well, they have Dandelion Groot...

Crazy, bizarre stuff from China.  It is just a giant, bizarre mess of CG and insanity.  A bizarre must-see!
Posted by Alec Pridgen at 10:22 PM

Email ThisBlogThis!Share to TwitterShare to FacebookShare to Pinterest
Labels: 2016, China