Why did you suck so badly?  Alongside a friend of mine (and a Follower), I watched this movie on Instant Viewing.  The premise is simple and awesome: a ninja battles the Klu Klux Klan.  This works for me.  It's not the kind of premise that makes a 'classically-good' film, but it does make a fun one.  Unfortunately, this movie is neither good nor fun.  There's a 'laundry list' of reasons why this movie fails.  To see what they are, read on.  What- why give up the baby cow when people will wait for the veal?  Seriously though, you need to see why this movie sucks.  Try to ignore the fact that the title card is not covering up the whole screen as we prepare to face some... 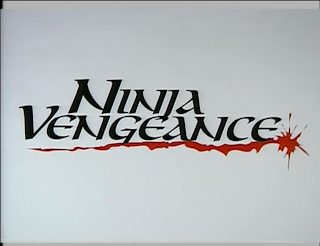 The film begins with some footage of people practicing Judo on a beach...but it's played in Negative.  Why?  Does that make it look cool or something?!?  After that, we see a nice little, racist town that appears to have only one black family living there.  Here's a thought- move!  Our hero drives in to town on his motorcycle, but it breaks down due to plot convenience.  He checks into a hotel while waiting for it to be fixed and puts out all of his ninja gear that includes a book called...Ninja?  What in the blue hell?!?!?  Trying to get past that, he goes out jogging and comes across the Klan beating up the town's only black teen.  As he thinks about whether he should act, the guy is beaten to death.  Our hero, ladies and gentlemen. 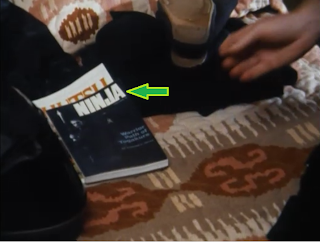 After being arrested, our hero is broken out of the town's little jail (guarded by one person) by the girl who was kind-of-sort-of friends with the black guy.  They state that he's lived here for a while- which raises more questions than it answers- but he was beaten to death for 'trying to get her to go back to school.'  She seems upset by this...when she first gets the news.  After that, she never seems bothered by it again.  This leads to the longest and dullest part of the film where our two heroes wander around the woods.  They seem to do something smart- like the 'ninja' telling her not to light a fire and draw attention- but then they forget about it.  Guess what happens when HE lights a fire?  Yeah, they show up.  During a struggle, the Sheriff is killed, leading his son/Deputy (seriously!!!) to swear revenge.  He gathers the Klan members and gives a golden line that only Ed Wood could have written- 'Once again we have been forced by force to use force.' 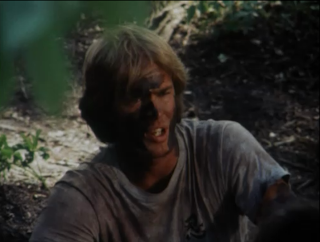 After running some more, the pair decides to hide out in a barn.  This leads to them having sex, giving us the film's other breast shot of the movie.  The other happens right the hell out of nowhere in the beginning and serves no purpose.  This one leads to our hero being handcuffed and left to die in a burning barn.  It worked on John Wilkes Booth, but it won't work on this guy!  While he pursues the Klan, our heroine goes to the black family and tells them what happened.  She's surprised when the young men of the group decide to respond to the death of their brother/cousin/someone they're related to!  What did you expect them to do?  This leads to the big confrontation involving the town's only black family, the Klan and our hero.  In a random moment, the girl's father calls an FBI agent, leading to an anti-climactic showdown.  The Klan watches the girl shoot the Deputy (she did it, not Marley!), the FBI shows up and...that's it.  It's quite literally a lazy version of the Deus Ex Machina.  The End. 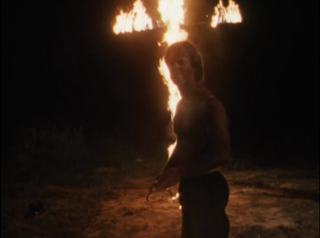 Wake me up when something interesting happens!  The plot of this movie has all of the potential in the world, but fails to deliver on any of it.  A ninja fighting racist guys in the South to defend a black man's honor- neat.  First, our hero is not a ninja.  He doesn't wear the outfit, use the instruments or even use stealth.  He also espouses a silly view when he says at one point that ninjas avoid violence.  Ninjas were famous assassins, you fool!!!  Second, the racist guys have no depth.  Why do they hate the black kid's actions?  It might be one thing if he was trying to get the girl to leave town for the first time, but he wasn't.  He was telling her to go back to school, which they evidently had no problem with before!  Finally, he doesn't defend the guy's honor.  He watches the guy die and then decides to act.  Never mind the lack of vengeance here, as he's constantly running away!  I wish that this movie had been something silly and fun.  Why couldn't the guy have called in a bunch of ninjas to help him out?  I'd watch that movie.  This is the kind of film that you need MST3K or Rifftrax to get through.  It's not quite Red Zone Cuba, but it's not good either. 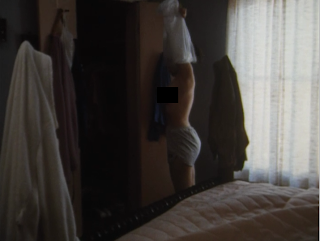 Next up, we end Ninja Week with a film called Ninja.  Will it live up to the potential of this week's theme?  Stay tuned...

Email ThisBlogThis!Share to TwitterShare to FacebookShare to Pinterest
Labels: ninjas