...and I feel fine!  With the second film here, let's throw in a quick summary for all you newbies.  By the way, kudos for reading the review of the second film and not the first...tool.
* An evil wizard did an evil thing- he resurrected some dead Japanese folks in a plot to destroy the world.
* Only Jubei- an idealized and partially-fictitious warrior- can save the day.
* He took out a bunch of warriors, including the famous fight Musashi Miyamoto.
* With the wizard still on the loose, our hero only has a few years to avert the disaster.
With all of that silly exposition out of the way, let's officially wrap this sucker of a series up with... 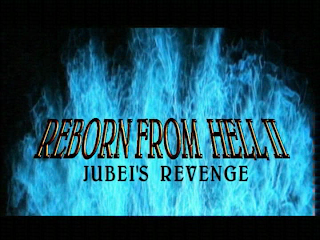 The demons are still scheming.  They aren't doing a lot, but they are scheming.  Keep it up, guys.  Meanwhile, Jubei is continuing to scheme as well.  He has a meeting with one of the men, but they know that he's on to them and he knows what they're up to.  It's a bit confusing, but don't focus on that.  Jubei fights ninjas!  Yeah, he did that in the last movie too, but...he does it here and they show more blood.  Seriously, there is a lot of blood in this movie! 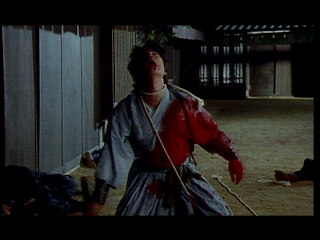 The big battle standing between Jubei and stopping Armageddon is a very personal one.  You see, his father is jealous of him and wishes that he could have his youth back to prove his superiority.  Not surprisingly, the evil wizard Shosetsu Yui is happy to oblige!  The guy grants the old man's wish, leading to the man turning on everyone he's known and loved.  Clearly you were kind of a dick before you became a demon!  Hell, you stabbed your own son's eye out when he looked away from you in combat for a split-second!  The battle is finally waged between father and son.  Who will emerge victorious?  Whose form will reign supreme?  Yeah, it's Jubei.  If you were shocked by this, you have not been reading this review so far! 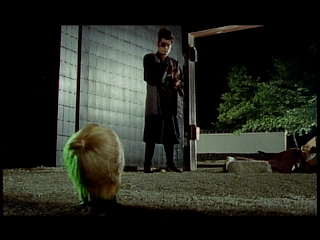 The Armageddon draws near!  Jubei rushes to stop the demon wizard and his companions.  With only a few of them left, he has to battle quickly.  Fortunately, he has the power of overly-idealized kung-fu and Editing on his side!  He faces off with the vain, female member of the group.  They prepare to duel as a smoke grenade (of sorts) goes on.  After about ten seconds, we see that Jubei is gone.  Not only that, but he's stripped the lady, tied her up and cut off her head!  Are you The Flash?!?  The villain's whole plot involves killing a person, using a naked lady as a vessel (hello, random and superfluous nudity) and resurrecting the guy.  The final step is doing this to one last guy, making him the 9th person to have this done to.  They manage to do it...for about three seconds as Jubei appears, grabs the guy and kills him.  That was anti-climactic.  He has one final battle with the Wizard and the remaining Demon, but he wins that too.  The End. 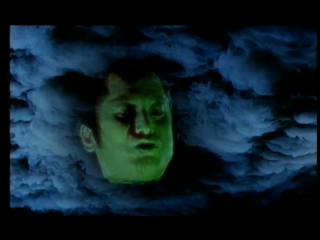 That sure was a lot of build-up, wasn't it?  The plot of this second-half of the movie is not bad.  There's really not a lot more to say about this one than there was the other one though.  The whole thing just feels, well, odd.  That is what happens when you mix the bizarre stuff with demonic resurrection, ancient Japanese characters and fictional character aspects.  That said, you can have a lot of fun with this bizarre, pulpy tale.  The DVD version for the United States even has a silly recap segment where some poor V.O. guy has to say about 30 complicated, Japanese names very quickly.  He was not paid enough.  This one ups the violence and gore, which is certainly an improvement over the original.  At the same time, however, the original film has the Jubei/Musashi fight in it.  Overall, the films work best when seen together.  As separate films, they don't do do as well.  The second film is stronger on its own- thanks to the Intro- but the original has its moments too.  If you haven't seen it, check it out.  There's always a 1981 version (starring Sonny Chiba), but make sure that you get the longer version.  One is 88 minutes, while the other is 122!  Oh yeah, the 2003 version is pretty good too.  Take us away, inexplicably fast (and dirty) Jubei... 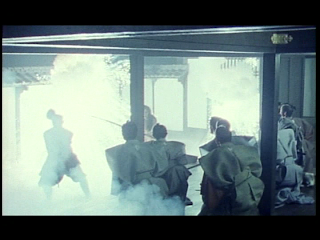 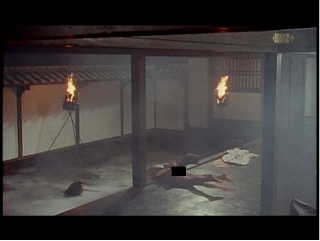 Next up, a really ridiculous film by the man behind Ghoulies.  If you think that you've seen the worst CGI imaginable, just wait!  Stay tuned...
Posted by Alec Pridgen at 11:56 PM