You are possibly the lamest ninja so far.  I've seen a lot of good ninjas (like those in Duel to Death or Revenge of the Ninja), but also a lot of bad ones.  Right now, this guy takes the cake.  The name- David Heavener.  If you don't know the name, be glad.  As a film star, he has a small resume.  As a Writer, Director and Producer, he has a much bigger one.  In fact, I've already covered one, although I didn't know the guy at the time.  That movie- Dawn of the Living Dead.  The less said about that movie- which also starred Heavener- the better.  If you're in the mood for more insulting of the guy after this review is over, you won't have to wait too long.  So what is (Lethal Ninja) For Hire about?  Well, a Chinese gang is running rampant, so the only one who can stop is a pasty, white guy who wears a ninja suit occasionally.  Ah, the '90s- you made all this shit possible.  Try to pretend that this is the hilarious MST3K short as we do work... 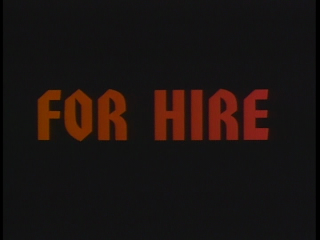 In possibly the most surreal opening not in We Are the Strange, a dance club/warehouse room is attacked by some casual, Chinese gang members.  The audience flees while (Not) Color Me Badd keeps singing and dancing.  Um, you do see all of the death, right?  It would be one thing if you were being cut to randomly a la Cool as Ice, but you're actually in the room.  Getting past that bit of craziness, we see the gang do more stuff while the film randomly shows us a ninja doing moves.  Thanks, I guess.  We see a kid at a party talking to a hired help (Heavener) and we learn that the guy trains the kid, but his dad doesn't know about it.  How does that work exactly?  What kind of training do you give a kid that he can't tell his dad about?  The dad is the District Attorney and he wants to clean up the city.  The Chief of Police, however, has given up, as his men keep dying.  This looks like a job for a...Lethal Ninja! 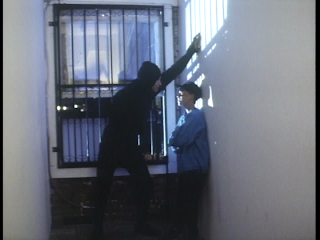 In a really obtuse way, he gets himself hired by the District Attorney.  He slips the guy a card, waits a bit and then slips him another card.  Apparently doing this twice works.  He has a simple fee for the job: $1 million!  Yes, he does sound like Dr. Evil.  The D.A. initially says 'no.'  Our hero then explains that there are four layers of hierarchy to take out at $250,000 each.  This works, as the D.A. hires him on the spot.  By the power of basic Math, I have the contract!  In a random, unrelated sub-plot, one of the lackeys has a feud with the lead henchman.  Does it add anything to the plot?  No, not really.  It does fill some time and give us some random fight scenes.  Speaking of random fight scenes, we learn that our hero and the lead henchman- he has a name, but I don't remember it- trained together.  We see them spar for a bit and then they fight some guys after a pick-up game of basketball.  Thanks, that accomplished...well, nothing.  By the way, I don't plan to explain this... 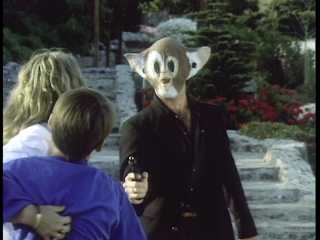 The villains get pro-active and kidnap the daughter of the D.A., aided by one of the guy's adopted daughters. She was having an affair with the lead guy, but has a change of heart.  Our hero puts on his ninja gear again to kick some ass.  He has a face-off with his former comrade, but it ends inconclusively.  By the way, the adopted daughter is just kind of killed abruptly.  At her funeral (cheery, movie), the feuding henchman dresses in drag and shoots up the place.  He is killed by his boss for...um, no reason that I can think of and the lead henchman has a change of heart.  This leads to our anti-climactic showdown in an art gallery used as a back-drop for a drug deal.  The paunchy, middle-aged leader is beaten up and tossed out a window.  That was an easy way to make $1 million.  The End. 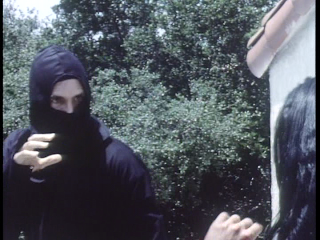 What a lame ninja!  The plot of this movie is a bit goofy, but also kind of dull.  They take a premise- a ninja is hired to take out a gang of thugs- and make it kind of boring.  You get a few scenes that you expect from the genre, but a lot of excess stuff too.  The whole sub-plot with the D.A.'s family is drawn out and really uninteresting.  What about the two feuding gang members?  Again- it adds nothing.  So much of this film is just filler to pass between the better scenes.  The biggest problem, of course, is Heavener himself.  Does he have screen presence?  No.  Mind you, his combination mullet/perm does not help matters either.  The bottom line- he can't carry this flawed film.  With all that said, you can have some fun laughing at the silly action and bad fashion on display.  As far as an actual film goes, however, it's not good.  You sir are no Sho Kosugi.  Take us away, oddly-choreographed-for-no-reason gang. 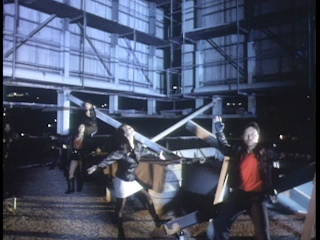 Up next, Casper Van Dien fights ninjas.  Yeah, that's all I need to say.  Stay tuned...