Ninja Week: Mask of the Ninja

Rico vs. Ninjas!  This 2008 Made-for-TV film combines two things that people never thought to combine before- Casper Van Dien and a bunch of ninjas.  That's certainly an odd combination!  Does it work though? The plot of this film involves a policeman (Dien) getting involved the investigation of a bunch of murders.  Who is responsible?  Why, ninjas, of course.  A bunch of random character actors show up as well, but the biggest star is still Van Dien.  That's a bit sad.  Will this film deliver more action than (Lethal Ninja) For Hire?  Will it *gasp* be good?  Find out as we seek to look underneath the... 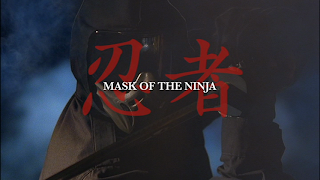 We start off pretty quick with a Japanese businessman at home with his daughter.  They are getting ready to go to a business function when *gasp* ninjas show up.  They make quick work of his guards and the two are forced to flee.  Meanwhile, we get a random scene involving Van Dien making an arrest in a nightclub.  The reason for this scene is that the daughter just happens to be dating the guy he's arresting and calls him for help.  Seriously, that's how convenient the logic for getting our hero on the case is!  He goes in by himself to save the day, which is about the worst idea ever.  The father fights the ninjas, but dies.  Van Dien shows up in time to distract the ninjas until more help arrives.  By the way, you haven't lived until you've seen the star of Starship Troopers kicked into a pool.  Good times.  Unfortunately, the ninjas are still out for blood, since the girl managed to escape. 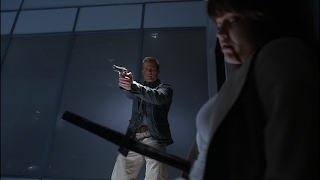 This leads us to the bulk of the movie- a pair of relationships.  In one hand, you have the somewhat-rival partnership of Van Dien and the daughter's personal bodyguard.  They initially don't trust each other, but later fight ninjas together.  As always, that fixes everything!  In the other hand, we have the budding relationship between Van Dien and the daughter.  Forget that they have nothing in common.  Forget that they barely know each other.  Forget that she was apparently dating a criminal at the beginning of this.  They're the lead characters, so, dammit, they have to get together.  Unfortunately, the group of ninjas behind this whole mess still haven't given up.  They even go so far as to hit up the LAPD's building a la Terminator in ninja-style body armor and flack jackets.  Our heroes narrowly escape, preparing for the battle yet to come. 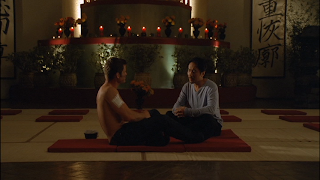 The ante gets raised for the final fight as our heroine gets kidnapped.  This is not shocking, but it is a bit odd how this goes down.  Early on, we met a biker gang that were her bodyguards and we see that they are hiding the woman out at a local monastery.  However, faster than you can say 'Good time to take a lunch break,' the ninjas just run up and take her.  That was, well, easy.  Add in the betrayal of a close person (I won't spoil it) and all things seems lost.  Of course, Van Dien and the bodyguard are still alive, so they make a comeback and save the day. What- you're surprised?  I can tell you that the movie is a bit more somber than you might expect, however.  The End. 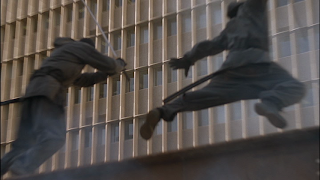 Ninja, ninja, rap!  The plot of this movie is pretty formulaic, but it kind of works.  I mean, this is not the kind of film that redefines a genre or stands out for years to come.  This is a pretty simple, action movie.  Nothing more, nothing less.  They try to cover for this with some character moments- like scenes between the daughter and her bodyguard- and by layering the plot with a lot of needless back-story.  Did we need to know why there are two factions fighting for control in Japan?  No, not really.  I should also note that the film gets really bloody at times and actually includes some torture scenes.  They just come right the hell out of nowhere too!  With all that said, this is a simple and fun movie.  It certainly didn't get a lot of attention.  Should it have?  Probably not, but it's easily worth a look, especially for people who like this cheap, Direct-to-TV stuff. 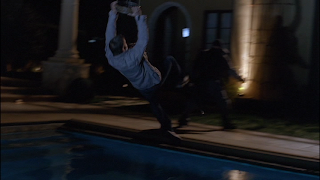 Up next, Bruce Le strikes back.  It's just a shame that the title is mostly a lie.  Stay tuned...