Lock Me Up!: Airline Disaster

Is this in bad taste?  We're coming up the 10th Anniversary of 9/11 and The Asylum has a film involving a plane crashing into buildings.  Consider that they already made The 9/11 Commission Report, a film which had 'That Lady From Monster' trying to stop terrorists and blamed 9/11 on Democrats who controlled neither the House nor the Senate.  I should also note that David Michael Latt directed this film and The 9/11 Commission Report.  You have a thing for planes crashing into buildings, don't you, David?  'The Lady from Monster' aka Sarah Lieving is back here too, although the film does not credit her.  Is it an insult or a compliment to have your name not appear in the Credits to an Asylum film you were in?  The big star on board here is Meredith Baxter (not Birney anymore) as The President- more on that later.  If you like convoluted plots and silly, CG objects, you're in luck.  Put your tray table and have your seat back in the full, upright position, because we're experiencing an... 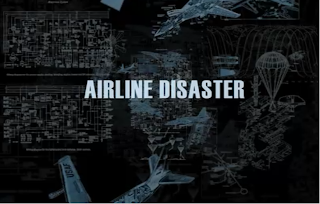 We quickly get the random aspects that make up the plot.  A super new jet is being taken out for a flight.  By the way, this is the second film out there right now with a plane controlled by a computer- weird.  The Pilot is the President's brother, which requires a Secret Service handler to be on board.  Meanwhile, a bunch of suspicious people all board the plane with bandages just under their eyes.  Yeah, TSA has very lax screening procedures apparently.  Don't worry- it's gets sillier.  Cross-cut with this scene, we meet 'That Lady From Monster' getting ready to take her kids to school.  Her husband is the pilot on the plane, despite looking about 20 years older than her.  Did Roger Clinton get tail like that?  A group of people kidnap them and flee the Police, taking them to a barn in the middle of nowhere.  Apparently there is only one Police car in L.A. and no helicopters to dispatch.  Once the plane is in the air, the not-at-all-suspicious people with the matching bandages take out their guns and...wait, how did they get guns on board?  This is a super-special flight, so wouldn't security be higher?  When you can't explain something, don't show it- it's The Asylum's way.  The President is upset. At this point, we essentially have three films.  One of them is a low-rent Passenger 57, with the Secret Service agent filling in for Wesley Snipes.  What- he was in jail when they made this!  The second film is a low-rent political thriller with President Baxter (not her character name- sadly) in her War Room going over what they can do to stop the plane without killing the people on board.  The third film is a low-rent Spartan, with a bunch of FBI Agents trying to find the missing family.  They're being used as leverage to keep the Pilot flying, so they need to be set free.  By the way, the Barn that they are kept in is the same one that was a shop in I Am Omega and was owned by the human hunter in Alien vs. Hunter.  Re-using sets- it's The Asylum way!  Now here's the trippy part- the lead FBI Agent is practically a dead-ringer for Barack Obama.  So, um, why did you have Baxter- who's clearly supposed to be Hillary Clinton- as the President and not this guy?  Does Latt hate Obama so much that he'd pretend that he didn't win the election or does this film take place in an alternate universe?  We need to know! 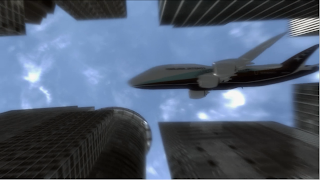 Thankfully for our heroes, they are facing some of the dumbest criminals of all-time.  The Secret Service Agent hides out in the Storeroom Area of the plane for 85% of the film and they never see her.  Unfortunately for our heroes, most of the gadgets that the U.S. Government tries to use to stop the plane are, well, terrible.  One program involves a satellite that can manually control a plane, but it malfunctions when the plane's computer gets damaged.  Later, they try to shoot a laser from space to 'melt' the plane, but miss.  What's the point in a James Bond-style satellite if you can't aim it?!?  The terrorists don't take this well and try to start killing hostages.  They kill a stewardess and immediately assume that she is the Air Marshall...except that the real one is also there.  He dies a completely lame and pointless death.  Our heroine in the Storeroom finally fights the villain...and loses.  However, he leaves her around and she takes the money that he was really after. He blows himself up...for no reason, forcing the plane to have a rough landing ahead.  The terrorists get taken out with ease (thanks for waiting to act!) and the plane manages to land, but only after smashing the Washington Monument.  Oh yeah, they freed Sarah and the kids too.  The End. 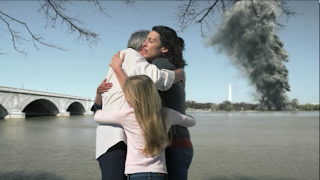 Crash- oh-ohh!  The plot of this movie is goofy and unfocused.  Things just happen because the plot needs it to, like the terrorists getting their guns on the plane.  Seriously, they never even give us a cheap excuse for this- it just happens!  The bigger problem is that the plot hinges on a whole bunch of coincidences.  The President's brother is a pilot- seems risky.  He's flying an experimental new plane on its maiden voyage- seems risky for the company.  His family is an easy target and has no personal security- seems illogical.  A person is also transporting over $150 million in bonds on this same flight of a new plane led by the President's brother- really, really stretching reality!  I could ignore some of this had it not piled on.  As it is, the film is a lazy and confusing action film.  The constant jumps from the FBI agents, the mother/family, the hostage-takers, the Secret Service Agent, the terrorists and the President makes it even more so.  If you guys could pick one plot, that would be super!  Take us away, Not Not Barack Obama... 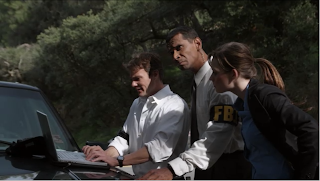 Next up, it's Ninja Week!  The first silent, but deadly assassin is David Heavener and he's...a Lethal Ninja...For Hire!  Stay tuned...
Posted by Alec Pridgen at 10:54 PM